Imagine you were a kid in early 1983.  While you likely played with Joe figures in 1982, it is also likely that your main interest at the beginning of the year was the upcoming Return of the Jedi figures in the Star Wars line.  Now, imagine watching cartoons on your local station one afternoon and seeing a fleeting 30 second commercial showcasing not only the newly designed G.I. Joe figures for 1983, but also touting their new articulation feature (Swivel Arm Battle Grip) that allowed the figures to use a whole new array of accessories.  Seeing Return of the Jedi in the theatre might have kept those figures near and dear to you for a while.  But, the increased Joe articulation, more varied colors, exceptionally detailed molds and incredible new accessories likely swept you into G.I. Joe and made it your preferred toyline.  At least, this is what happened to me, my friends, my brothers, their friends and a host of other kids in 1983.

There were, basically, 4 new Joe figures who got the most face time in the Joe commercials: Gung Ho, Airborne, Doc and Snow Job. Each of these major characters brought a completely new look to the world of G.I. Joe. The introduced specialties beyond those of the original 13 and really allowed the figures to show the characterization that was evident from the filecards. For me, these four new characters opened up the Joe world beyond anything Star Wars could offer. As soon as I had my first Airborne figure, G.I. Joe had replaced Star Wars as the figure brand du jour in my home and would hold that place until I stopped playing with toys entirely.

As a figure, Snow Job is exceptionally well done. His base is standard white. But, the small details just bring him to life. The black scarf and goggles along with brown shoulder pads and belt provide just enough color to break up on the monotone body and give the figure depth. But, the true highlight is the flaming orange beard. This gives Snow Job a definitive look and allowed the designers to add a bright color to the figure in a way that was realistic. Much has been made about the abundance of redheads on the Joe team. I suspect that this was a way for the early designers to incorporate the color into figures without giving up realism. Thunder is a great figure in green and brown that fits with military style. But, the red hair brings much more color to the mold without sacrificing realism.

I got my first Snow Job figure for Christmas in 1983. Due to the figure's popularity with wintertime gift givers, though, both of my brothers also got one. So, we had three Snow Job figures for winter fun. That first snowfall, Snow Job saw some use. But, as the snow melted, the figure became less interesting. At some point, though, I saw a television movie (possibly The Day After, but I'm not sure as it's a fleeting memory) where enemy troops were dressed nearly identical to Snow Job. At that point, Snow Job figures became an army, often against the Joes. It was easy since I had so many of the figure and the white uniforms weren't really all that much more ridiculous than Cobra's blue. This lasted a short time before Snow Job fell out of the limelight again. In 1985, he saw a bit of duty on my new Snow Cat. But, he was replaced by Iceberg in 1986 and never returned. The figure really became more valuable for his accessories as I spread his gun out to Duke, Hawk and Flint and his skis would be brandished by any figure I wanted to take out in the snow.

These days, Snow Job doesn't see much time in the limelight. Living in the desert, I haven't seen snow in over a decade. Even cold days are few and far between. On top of that, the only real arctic vehicles I have are the Snow Cat and Blockbuster tank. The Snow Cat is really left for figures like Iceberg and Blizzard while the Blockbuster is weighed down with Snow Storm figures. For whatever reason, the Polar Battle Bear never resonated with me as a toy. So, Snow Job is basically just drawer fodder for now. It's an unjust fate for a figure of this quality, but Snow Job is just a victim of circumstance. Should I ever move to a colder climate, I could see the figure taking on greater importance. But, for now, he is mostly just memories.

Snow Job's accessories are remarkable for the time. His laser rifle became a cartoon staple. But, it's original appearance was something very different from the rifles included with the first wave of Joe figures. It is the backpack, skis and ski poles, though, which up the ante for all action figures that would follow Joe. In a feat of engineering, the skis and poles fit into the pack allowing Snow Job to carry his accessories when he's not using them. The skis are a well detailed with bindings that attach to the figure's feet. The poles are a bit fragile, but they are also nicely designed and can wrap around the figure's wrists or be held in Snow Job's hands. The Joe designers of 1983 showed what was possible with accessory complements. Kenner had upped the ante a bit with their initial Return of the Jedi figure line in early 1983. But, Hasbro completely blew them out of the water with their own yearly offerings. It was just the beginning of accessory progression, too, as the Joe team would push the envelope of that type of accessories they could offer to consumers well into 1992.

As a mold, Snow Job was done to death.  Aside the Hasbro releases, the figure was also produced by the Funskool toy company for release in India and the Nilco toy company for release in Egypt.  These figures are basically identical to the American release.  Hasbro re-acquired the mold and first re-used it in 1997.  It then appeared in 2000/2001 as Whiteout, in 2003 as the Snowcat driver, in 2005 as part of the Winter Operations exclusive set and 2010 as part of a Then and Now concept.  On top of these releases, parts of the mold have been used for the arctic Snake Eyes in 2004 and a convention figure in 2007.  Basically, Snow Job has been done to death and there are really no reasons for him to ever appear again.

Mint and complete Snow Jobs have greatly decreased in value in the past decade.  For a time, truly minty white Snow Job figures would fetch upwards of $25.  But, years of re-paints and re-releases helped to temper the demand for the figure. It's still somewhat difficult to find a gem mint, white figure. But, it can be done and they will likely cost only around $15-$18. If you are willing to take on a slight bit of discoloration, the price is cut in half. (And, no matter how good of care you give to that gem mint Snow Job, it's likely that he will, eventually, discolor, too. It's just the nature of the plastic. You can stave off the deterioration for a while, but it will happen, eventually.) As a classic Joe, Snow Job is an essential part of any collection. As a high quality figure, he is even more so. Figures like Snow Job showed what action figures could be. And, for these reasons, he is a figure who will always be a part of my collection. 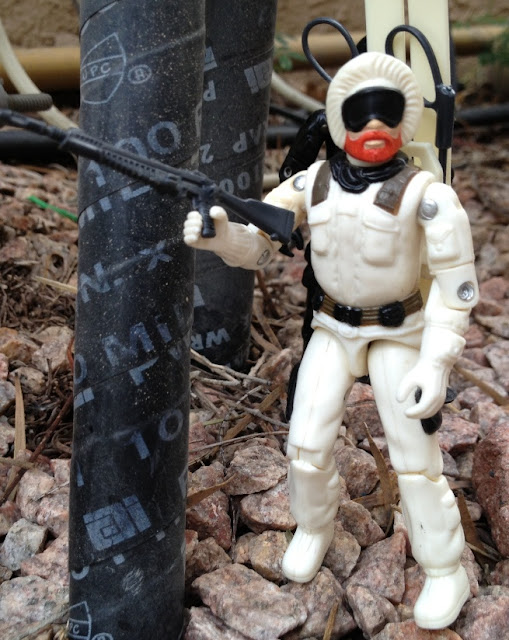 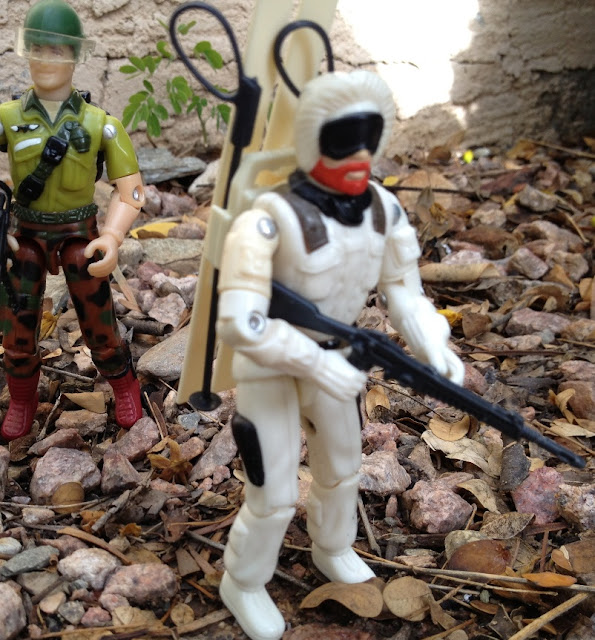 Posted by Robot_Sonic at 10:09 AM
Email ThisBlogThis!Share to TwitterShare to FacebookShare to Pinterest
Labels: 1983, Snow Job