In the early 2000's, collectors were army builder crazy. Hasbro couldn't put out enough army builders fast enough to satisfy the demand. As such, collectors were starved for new offerings that gave them figure molds they desired in colors that were acceptable. In early 2001, an enterprising group of collectors mass imported Funskool Joe figures and sold them directly to the online collecting community for cheap prices. While there were many gems of figures in this initial offering of around 40 different figures, it was the opportunity to acquire some new, cheap army builders that really go collectors interested. One of the most popular Funskool offerings was their take on the Night Viper.

Colored almost identically to the American figure, the Funskool version only had two issues: a neon eye piece and a neon backpack. As the figure was still the awesome green and black, though, collectors were forgiving of these two, minor shortcomings. As such, the initial shipment of Night Vipers sold out in a matter of hours. In June of 2001, when SmallJoes.com opened, their stock of Funskool Night Vipers also sold out in the first day. There was just a huge demand and it took most of the rest of 2001 before Night Vipers would remain in stock for more than week at the major online Joe dealers. But, the figure lived up to the hype and was one of the most popular army building figures of the early 2000's.

At its core, this figure is pretty much the same as the American figure. There are differences in the yellow logo, the general plastic colors of the greens, flesh tones and blacks. But, these figures integrate very easily into American Night Viper collections. While the pack is bright orange and the eye piece is bright yellow, these aren't overly essential accessories. So, the figure with just the black rifle and green headpiece avoids all the trappings of neon and helps these figures integrate more seamlessly into American armies. And, that was the appeal of the figures from the start. Of all the Funskool army builders made available, the Night Viper was the most similar to the American figure. And, in the case of the Night Viper, the American figure was a well regarded and somewhat expensive member of Cobra for collectors to acquire when the Funskool figures first appeared.

For me, the availability of the figure lead him to a greater role in my collection. While I had acquired an American Night Viper in the summer of 1990 (my only Joe purchase between 1988 and 1992), I had never viewed the figure as an integral part of my Cobra army. But, the cheap masses of Funskool Night Vipers changed that. The figure's mold is just cool enough to warrant large inclusion in a collection. So, having them available for cheap simply made that dream a reality. With my ranks swelled by Funskool Night Vipers, the figure became me de facto jungle and forest Cobra. Here, my armies would tussle with Joes and you can see the figure as a staple in many of my earliest photos. Today, that still remains the same as my Night Viper army survived the purge of my collection and these figures remain a display piece that outweighs their availability.

There are variants to this figure. The most notable are the accessory variants. From the 1990's through 2003, most Night Vipers were packaged with a black rifle. However, in late 2001, for a very short time, Funskool changed the rifle color to grey. While the grey rifles are harder to find, this was during the time of mass Funskool imports, so quite a few of them got to collectors in the U.S. Along with this gun variant, the figure's themselves show subtle color differences across different production runs. So, it's possible to acquire Night Vipers that were made over several years and see very distinct greens or flesh colors in each figure. It's not a variant that's overly exciting, but it is something that can add some diversity to an army.

For many, many years, this figure was available for $4 for a carded version. In 2004, though, the supply started to dry up and prices rose. Still, through the 2000's, it was very possible to get this figure for under $8 for a carded version. And, since so many collectors had opened up armies of these Night Vipers, loose figures were available for about 1/2 that amount. Now, though, the supply is further absorbed by the collecting world. Carded figures run into the $16 range, though you still can find them for cheaper. Loose figures are not as ubiquitous as they once were. But, mint and complete with filecard versions will go for $6 to $8 per figure. It's a small price to pay for a figure of this quality. And, I don't think that the price difference between the American and Indian versions are enough to justify an army of the Hasbro figure over the Funskool offering. 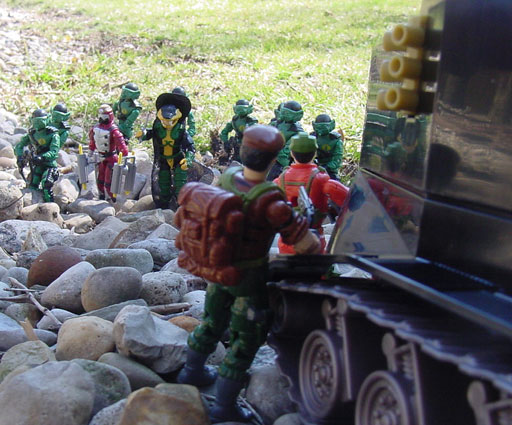