In my trips to Toys R Us in 1995 and 1996, there was one group of figures that I simply could never even bring myself to try: the Street Fighter G.I. Joes.  They were too far removed from what I considered to be Joe.  Even figures with black weapon trees (the one thing that could get me to buy any figure) were not enough to sway me.  More than once, I held the figures in my hand and simply couldn't bring myself to buy one.  To this day, I have no Street Fighter G.I. Joe figures in my collection.  Through the years, though, I have found many of the Street Fighter Movie figures to have value.  Various Guile incarnations have called my collection home and the Balrog figure was a Cobra villain in my collection long before Master Collector re-used the head in 2007.  The Street Fighter movie line contains some very interesting takes on the various characters from the franchise.  (Though, I know nothing about the franchise outside of the figure lines that accompanied it.)  The Dhalsim figure from the movie line, though, isn't all that different from his G.I. Joe release.  He's got a few different colors.  The differentiating factor is his accessories.  Dhalsim includes a white lab coat that was a staple of Joe collectors in the 1990's as it was the one piece of gear that could effectively create a Dr. Venom custom figure.  In my zeal to acquire that piece, though, I found a character who has some odd, and redeeming traits that can work for Joe.


Dhalsim is billed as a Yoga Fighter from India.  Yoga is a meditative practice whose moves are not offensive.  As such, it makes little sense that the practice of said discipline would make one a formidable combatant.  However, Yoga is known to be both a physical and mental test that pushes the body.  Many professional fighters practice Yoga.  It helps them retain flexibility and strength while clearing their mind and helping them focus on their profession.  As such, a Yoga disciple could very easy use his mastery of the form to enhance his combat prowess.  So, seeing a "Yoga Fighter" might be a bit liberal with the vernacular.  But, it is in line with the training regimen that any professional fighter might employ.

Dhalsim is listed as 6 feet tall and 148 pounds.  That would make him quite lithe.  And, while he could have a defined physique, the massive muscles seen on the artwork and figure would likely place him a bit heavier.  Still, it's hard to not see a bit of Anderson Silva in Dhalsim.  So, you can see him as a formidable opponent in a combat arena.  It is not this physical description that is most interesting to me, though.  Dhalsim is also described as a scientist.  (Hence the lab coat.)  He was a professor of bio physics in Calcutta.  That part of his background is useful.  With this pedigree, Dhalsim could have been sought out by Cobra to continue work of enhancing Cobra Troopers to be capable of unspeakable feats.  The fact that Dhalsim would willing join into this endeavor plays into his over the top look and just cements that reality that he is one of the most dangerous men in the world.

The single most disturbing thing about the figure, though, is the small necklace of human skulls.  Wearing old bones is a time honored tactic to instill fear into an opponent.  Ancient warrior cultures employed the practice quite often.  However, Dhalsim's skulls speak to something much worse.  The skulls are small...implying they come from children.  At first, I thought the skulls might be from shrunken heads.  While those are mostly a South American custom, it's feasible that anyone in the modern world would pick up the skills.  However, shrunken heads do not actually contain any human bones.  The skin is removed and then shaped over small, often wooden, balls.  The skin is what is shrunken, not the bones.  So, these skulls would have to be from small children.  What type of absolute monster would wear the remains of children?!?  It provides an insight into Dhalsim that speaks to an evil.  An evil that could be useful to an organization like Cobra.

It is here that I've found use for the character.  Sure, he's dressed like a wildman.  But, that's part of the visage Dhalsim has worked for himself.  By looking primitive, opponents may underestimate him.  The biggest part of that underestimation, though, is Dhalsim's scientific and technological bent.  Anyone who sees a barefoot, shirtless man with vibrant, blank eyes wearing a necklace of children's skulls would likely not have an initial thought that this person was a scientific genius and had access to technological weapons that are far more dangerous than engaging Dhalsim in hand to hand combat.  The notion of a noble savage permeates western literature.  Dhalsim being this evil savage stands in stark contrast to the archetype.  He has the refinery of the standard bearer.  But, he has a darkness in him that defines his actions and appearance.  The skulls and primitive dress are actually a dire warning to any who approach him that he is evil and will carry out unspeakable acts.  The fact that he has a brain and is capable of creating weapons that can destroy humanity rather than just a few individuals is hidden behind the savage countenance.

The weakness of a character like this, though, is that his certainty and strength of character blind him to to his faults.  While Dhalsim wants everyone to know that he's crazy, it is that knowledge that holds him back.  Cobra Commander will never allow Dhalsim to work sans oversight.  There would always be contingency plans in place to eliminate Dhalsim should his work begin to progress beyond what Cobra Commander can control. As such, he is relegated to tasks that don't give him access to the weapons of mass destruction that he could so easily create.  Dhalsim is kept away from the Toxo Viper labs and is not allowed near any of Destro's most calamitous machines.  Of course, Dhalsim is smart enough to know this and it feeds a seething hatred deep in his belly that he may one day take out on Cobra itself.

While the figure sculpting is decent, it is the accessories that make this figure worthwhile.  Ostensibly, he included the same accessories as the 1994 Night Creeper Leader figure.  The swords, wicked knife and Night Creeper crossbow are all decent accessories.  They give the figure close quarter weapons while also offering him a firearm that can take out more distanced opponents.  There is a Road Pig, wrist mounted explosive tipped crossbow and an arm guard, too.  In all, it's a strong complement of gear in golden colors.  The coup de gras, though, is the lab coat.  The white cloth coat completely changes the look of this figure.  But, it's also a perfect accessory to procure for an upgrade to any Dr. MindbenderDr. Mindbender figure or Dr. Venom custom.  The coat may have been released elsewhere in the Street Fighter Movie or Mortal Combat figures lines, but I can't find any evidence that it was.  But, the fact it was made for these limited run lines implies that Hasbro either had greater hopes for the future of the franchises or the coat had been made up for a figure that was going to be part of the G.I. Joe line in 1995.  Either way, the coat is a great accessory that is essential for any Joe collection.

The Dhalsim figure was created for the 1993 Street Fighter G.I. Joe line.  That figure lacked the lab coat and had yellow shorts.  Being in the Street Fighter line, though, meant that the figure was saddled with the action features and non standard G.I. Joe construction.  While the scale is there, the articulation at the waist is gone.  The arms lock into positions based on the spring action feature and can not be posed with the flexibility Joe collectors had come to expect.  As such, the figure becomes limited by his construction.  Like some of the Shadow Ninja figures, the coolness of the design is tempered by the choice of articulation.  And, the figure suffers for it.  Were Dhalsim in vintage Joe construction, it's likely he would not only be more popular, he'd be far more expensive, too.

The Street Fighter movie figures had a solid package presentation.  Above the figure bubble was artwork unique to the character.  While not as pronounced as Joe artwork, it's still there and a way to quickly determine a figure from the card.  The figure is posed in a flat bubble.  Most of the figures in the line were posed in some sort of action pose.  Surrounding the figure are all the accessories included.  Anyone looking to buy the figure instantly can see the full array of gear included with each figure.  The plastic trees that obscured Joe accessories in 1993 and 1994 were gone.  The packaging style was also used in the Sgt. Savage line.  The reason the packaging is significant, though, is that this is what Joes would have looked like in 1995.  Had the Joe line survived for one more year, the traditional side card artwork would have been gone and replaced by this more presentative format.  These ancillary lines are likely where a lot of abandoned G.I. Joe concepts ended up.  (Many Mortal Combat Movie figures use unproduced molds from the cancelled 1995 Ninja Commandos line.)  For that reason, the Street Fighter Movie and Mortal Combat lines are more intertwined with Joe that the simple 1993 cross over connection.

The Street Fighter Movie figures are not common.  They were widely clearanced by KB Toys back in the mid 1990's due to the movie's poor reception.  Many dealers bought up overstock as that was what dealers did in the 1990's.  But, they are not overly popular and many people who have them don't realize that their greatest value is among G.I. Joe collectors.  There are times when they are nearly impossible to find and other times when there are a few sets available.  Dhalsim isn't the rarest figure in the series, but he is harder to find than many of the Guile variants.  Since the lab coat was widely coveted by early Joe collectors, many of Dhalsims were absorbed early in the collecting market.  As such, MOC Dhalsims tend to run between $20 and $25.  Loose, mint and complete figures can be had for around $15.  But, it's actually easier to find carded samples than it is loose.  So, this isn't a cheap figure in terms of the Joe line.  But, he's also not expensive.  (There was a time in the mid 2000's when this was a $40 figure.  Those days are gone, though.)  If you're new to the Joe world, this probably isn't a figure that should be high on your list.  If you have mostly completed your collection and are looking for new, odd things to add on, this is a great addition.  The regular Street Fighter figure is substantially cheaper.  But, I think the lab coat is actually worth the extra money since it adds to Dhalsim's characterization.   I'm actually happy with this figure, even if the construction is non standard and it's not a true Joe character.  He's one of those fun ancillary collection items that can add a lot of value to a Joe collection.  So, I'd definitely recommend one to all collectors. 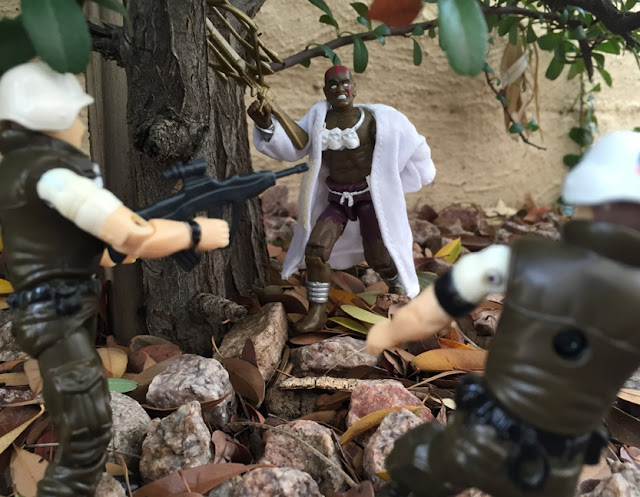 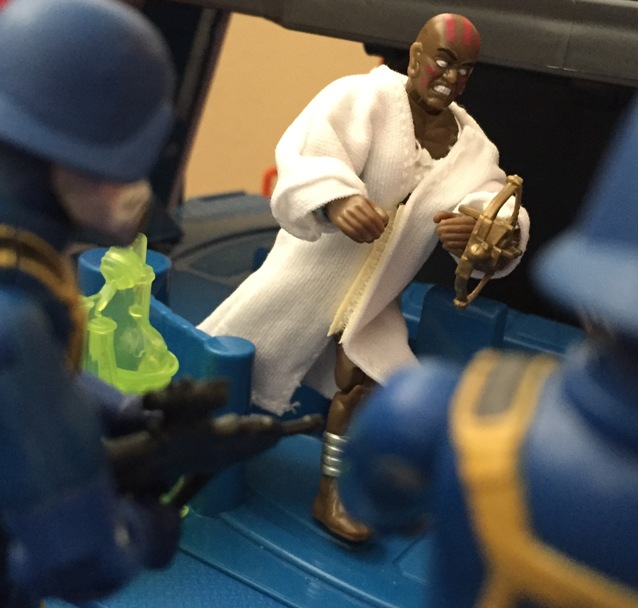 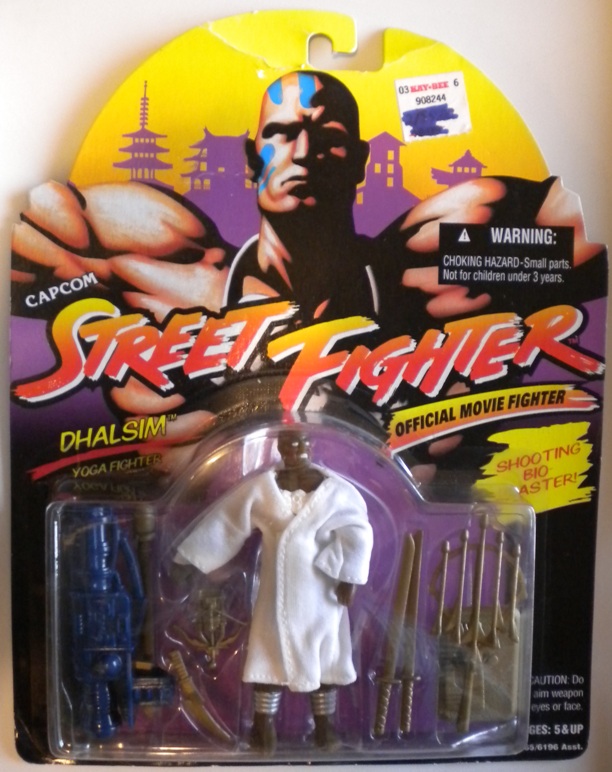 Posted by Robot_Sonic at 4:00 AM
Email ThisBlogThis!Share to TwitterShare to FacebookShare to Pinterest
Labels: 1995, Dhalsim, Street Fighter