Tonight, around 6PM Eastern time, Ken Griffey Jr. will be elected to the Baseball Hall of Fame.  He will likely go in with one of the highest vote percentages ever.  If you are of a certain age, there is one indelible image of Griffey, his 1989 Upper Deck rookie card.
In the late 1980's, sports card collecting exploded.  It was popular among kids and adults.  Many fathers used collecting as bonding experience with their sons.  Card shows were a weekly occurrence and they were often so well attended that there were months' long waiting lists to get dealer tables at even the smallest shows.  People scoured garage sales and thrift shops for old cards: hoping to get that score.  There were articles in the Wall Street Journal about the high prices certain cards were fetching and how they were out appreciating commodities like gold.  Baseball realized the cash cow potential and expanded their license for producing cards to companies beyond Topps, Fleer and Donruss.  In 1988, Score cards appeared.  The first set is outlandishly '80's in its color choices. But, it brought higher quality photography to cards.  In 1989, the bar was raised again by newcomer Upper Deck.

Upper Deck did several things that had not been done before.  First, they improved the quality of the photos again.  They also used a clean, pristine white background that made the cards pop.  On the back was a hologram designed to guarantee authenticity.  For all this, though, collectors were treated to a retail price of .89 per pack.  (A stark increase from the .45 - .50 per pack of their competitors.)  Of course, Upper Deck cards were scarce.  They were basically impossible to find at retail.  Instead, you had to buy packs from dealers, often for $2 per pack.  The other novelty of the set, though, was card #1.  Traditionally, card #1 was reserved for a superstar.  But, in recent years, companies had gotten away from that.  Upper Deck took a chance and, instead of granting #1 to a proven player, gave it to a rookie who had yet to play in the Major Leagues: Ken Griffey Jr.

Choosing a rookie for such a coveted spot was a gamble.  But, Ken Griffey Jr. was about as sure a thing as existed among Major League rookies in the 1980s.  He had a professional pedigree, had played high school baseball at one of the most storied high schools in the country and was a natural athlete.  When he made the Mariners out of Spring Training, there was an excitement of what could be.  Many felt that Griffey was going to be Willie Mays and Hand Aaron combined.  He had that talent.  And, while his rookie season was underwhelming in totality, he was also only 19 years old.

As the '90's dawned, sports cards in general began a death spiral.  Upper Deck changed the game.  No one wanted cards from the other companies anymore.  The higher price point of Upper Deck meant they were better.  Dealers wouldn't buy Griffey rookies that weren't Upper Deck.  In short order, the other companies went in the "premium card" market, raising prices to as high as $5 per pack in some instances.  This priced kids out.  When the economy slowed down in the early 1990's, it took the sports card market with it.  By 1991, shows had lower attendance.  Dealer tables were unsold and you could buy them for discounts on the day of the show.  The ubiquitous Baseball Card shops that sprouted up all over the place slowly started to close down.  While prices for premium cards of premium players rose, everything else fell precipitously.  The infusion of Football, Basketball and even Hockey fans into the market that had been dominated by baseball was just masking the decline of an industry.  At it's height, this Griffey card was worth $50 or more.  Now, ungraded versions are worth maybe $5.

Personally, though, this card holds great sentimental value for me.  As Joes became less important to me, I found baseball as a pastime.  I had never really paid attention to sports.  But, I watched the 1986 World Series with my grandfather.  It was a great experience, but the season ended in disappointment and I didn't think much about the sport until the following summer.  My same grandfather was visiting for a month.  He took our TV out to our back deck to watch his shows outside in the warm air.  When I came from school one day, he was there, catching the final innings of a Cubs game.  The Cubs had scored more than 20 runs.  I didn't realize such a thing was possible in baseball and I was hooked.  (As a note, a quick review of Baseball Reference shows that game was likely a June 3, 1987 game between the Cubs and Astros.)  I watched games religiously all summer.  I was still buying Joe toys that year.  But, in the fall, I made a fateful purchase.  At the local Broad Ripple Hook's Drug Store, I purchased a pack of 1987 Topps baseball cards.  Once in hand, a new hobby was born.  While I bought a couple of Joes in 1988, the rest of my disposable income for the next four years would be spent on thousands and thousands of sports cards.

Over the next few years, I was more and more immersed in the sports card world.  In 1989, I was a Freshman in high school when this Griffey card made it's appearance.  For the first part of the year, I reluctantly bought a few packs of Upper Deck.  The higher price point made the purchases unpalatable.  But, they were nice cards and it was apparent that they were the future.  That summer, I took a Driver's Ed course at a local learning center.  Each day, there was a 15 minute break.  During that time, most of the students would walk over to the Hook's Drugs next door and buy some candy or soda.  I did the same.  One day, though, I found something different.  There was a mostly empty box of Upper Deck cards sitting on the shelf.  There were four or five packs left.  The great thing, though, was they were retail price of .89.  I quickly bought all five and returned to my class.  Waiting for the teacher, I opened them.  Inside one was the prized Ken Griffey Jr. card!  It was a moment of pure euphoria.  Not only had I gotten the holy grail of baseball cards, but I had gotten it for half the price it would have cost me from a dealer.  It was a great moment I will never forget.

As the summer dragged on, I found another box of Upper Deck at a local, independent drug store.  I was with a friend of mine.  I bought two packs.  He made fun of me for not having any money and proceeded to buy the rest of the box.  I opened my first pack and found another Griffey.  He did not get one in all the packs he purchased.  That Griffey haunted him for years and I didn't let him forget it, either.  (He and I would end up buying dealer tables a few years later and both made a lot of money selling cards, though.)

The reason I broke from tradition to talk about sports on the site is because this card was such a part of my youth.  I still have that original Ken Griffey Jr. card that I got at that Driver's Ed class.  It is one of the few that remain.  While I doubt my kids will ever appreciate sports cards for what they were, I do hope that they find something so old to them interesting.  Seeing Griffey go into the Hall of Fame is sort of a passage for me.  His career started when I was in high school, burgeoned while I was in college and came to a close as my life was getting started.  I look at the bright eyed youngster in the card below and it reminds of how I felt in those days.  The whole world was ahead of me and was filled with unbridled potential.

It could be said, though, that Griffey never lived up to his potential.  That's patently unfair.  But, when you thought of him as a guy who would break records and eclipse guys like Mays, he seemed an transcending talent.  And, through his age 29 season, he was.  But, in his 30's, Griffey was a brittle mess who accumulated little value.  Sure, he hit over 600 home runs and has a career WAR value of 83.8.  He is a clear hall of famer.  But, he was thought of as a guy who would be one of the two or three best players in history.  That didn't happen.  In a way, that mirrors life.  When you're young, anything is possible.  As you get older, you realize that's not always true.  But, you find solace and happiness in what you have done and can still do.  Recently, Griffey recreated this iconic pose from his rookie card for a rap video.  He is heavier and older.  But, so am I.  The thing that was still there was the smile.  And, perhaps, that's the most important part.

This Griffey has been called the last great baseball card.  And, it likely is.  The industry died mostly as a result of the trends that were started by the 1989 Upper Deck set.  This card stands as the lone iconoclast of the era.  For thousands of people like me, it has a value that is not monetary.  Seeing Griffey's career reach the pinnacle is a culmination of the promise shown in his visage.  It is also a reminder to me that it's important to remember where you've been in life as that can often be a path to where you want to be. 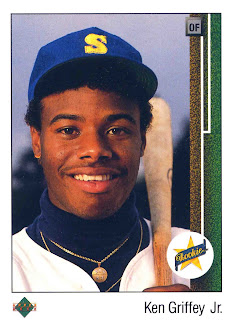