In 1995, I got caught up in the return of Star Wars figures to retail.  Sure, the figures were buff beyond any reasonable expectation.  But, in the scope of action figures designed and released in the mid 1990's, they were actually somewhat tame.  Through 1999, I spent copious amounts of time searching retail stores trying to keep up with my completist tendencies.  At various times, it could take months to find new waves of figures.  It was an incredibly frustrating time to collect toys.  But, it was also an awesome time as stores still stocked massive walls of toys and, when the toys were shipping, you could go weeks finding all the stuff that you had been pining for.

In 1999, though, the fist Star Wars prequel was released.  There was so much anticipation for "The Phantom Menace" that the thought of not collecting the toys never entered my mind.  As we got closer to the movie release, though, one thing became apparent: there was simply going to be too much merchandise for me to even attempt to remain a completist.  At the time, online Joe was burgeoning and I was buying up large collections of Joes at every chance.  Maintaining two lines was untenable.  I found myself, though, unable to resist all the figures and I ended up picking and choosing various figures.  This trend continued for the next 10 years.  I bought a figure here and a figure there.  Usually, they were favorite characters or obscure releases that helped to flesh out the base collection.  Slowly, though, even those sporadic purchases abated as figures of characters I cared about became only marginally better than ones I had and the line expanded more and more into Expanded Universe offerings that did not interest me.

I left Star Wars behind and focused on collecting Joes.  Even the films, that had once been a multiple time per year viewing event were forgotten and I didn't even bother to purchase the Blu Ray discs when they were released.  Then, "The Force Awakens" was announced.  Slowly, news and images and plot devices were released.  I'd find myself interested in some of the news.  But, I generally felt that the new film was something out of touch with how I wanted the Star Wars mythology to fit into my life.  As trailers were released, though, I felt a twinge of excitement and thought it would be interesting to check out the toys.  Imagine my surprise to find that the super articulated figures I had left behind in the early 2010's were now high priced collector oriented releases and the base figure line was a five points of articulation design.

The new construction, of course, had its roots in the vintage line.  It also had its roots in cost cutting.  However, as a new parent, I appreciate the sturdiness of toys over some playability.  The super articulated figures sitting in my garage would have been torn apart in seconds had my children gotten ahold of them.  The five points of articulation design is stronger and leads to less breakage and loss.  It also leads to the figure being able to basically do two things: stand up with his arms at his side or blaster extended or, sit down.  (Really, though, this is an achievement as many of figures from year's past can not sit and fit into vehicles, etc.)  The fun poses which are the hallmark of my myriad of differently colored Clone Troopers are not possible.  I'm not sure this is a bad thing, though.  My son has taken the figures to bed with him, carried them around the house and played with them outside.  Were the figure super articulated, he'd have a body stump left with parts strewn into an unfindable maze.  I appreciate the fact that the stronger construction has left the figures intact.

The upgrade over the vintage line is the sculpting.  While the figure's articulation is limited, the mold design and paint application is not.  The body is full of the little details that are the hallmarks of quality toys.  Standing on a shelf, you would not know this figure is substantially less posable than army builders from just a few years before.  The design is on par with the best of what Hasbro has done.  For that, I can forgive the lack of articulation.  The value of this figure, to me, is him placed on a shelf: interspersed with other figures from the 20+ years of Star Wars figures we have seen since the relaunch in 1995.  There, he works.  If I wanted a massive diorama with hundreds of troopers taking a position, though, this figure would fail.  But, as a representation of the character, it is strong: especially when you consider the price point.

The figure's accessories are basic and elaborate.  Ostensibly, he includes the standard blaster rifle.  It is derivative of the original Storm Trooper blasters and looks good with the figure.  He can hold it well enough.  The rifle is also painted white, so it has some detailing.  Also included with the figure is an accessory that harks back to the superfluous gear that was common in the 1990's Star Wars lines.  It is a stand up laser cannon that can be combined with other accessories to build something.  The cannon is decently detailed and is kind of cool.  It just won't stand up to be used by the figure.  The most stable position is too low for the figure to use.  Of course, were the figure super articulated, it wouldn't be an issue....

At its core, this figure is recognizable as a Stormtrooper.  While the Prequels had to create looks for Clone Troopers that could, conceivably, evolve into the later Stormtrooper appearance, the new films have no such constraints.  Rather than going with radical new designs, though, the creators kept the look of the Stormtroopers relatively true to their origins.  You know this is a Stormtrooper.  But, you also know it's not a Stormtrooper from the original trilogy. This generates a semblance of continuity between the films and kept The Force Awakens from being too removed from the core Star Wars experience.  (Plagarizing the entire plot from A New Hope helped with that, too.)  As such, you have a good, recognizable figure that fits in with pretty much every collection.

In 1999, untold multitudes of people bought up boxes and boxes of Episode I toys to tuck away into an attic or garage in hopes of selling them for big bucks at some point in the future.  16 years later, the Episode I toys from the early waves are completely and utterly worthless.  And, there really is no sign of them ever being worth retail plus inflation since so many of them were released over and over again, were updated into better versions and are characters about whom collectors simply don't care.  For The Force Awakens, Hasbro didn't seem to release as many figures as they did for Episode I.  This may simply be perception.  But, many prognosticators who were around for both launches report the same.  In the past, huge box office success was often a sign that a film had permeated the cultural conscience.  That is less true today as blockbusters have appallingly short cultural influence.  As such, it's difficult to say if The Force Awakens becomes a cultural driving force like Star Wars was 40 years ago.  But, in terms of long term value, I wouldn't put much faith in any modern Star Wars toy.  Some may appreciate.  But, Hasbro is not going to let molds die out with unfulfilled retail potential and it's likely this figure will see multiple releases through the next few years.  It is likely, though, that more kids will play with figures like this Stormtrooper than they will figures from the Black Series or even figures from the prequel films.  Again, whether these youngsters turn into adult collectors is largely unknown.  (I'd say it's unlikely that the collectors forged in 2015 will behave the same and have the same desires of collectors who came of age in the 1970's and 1980's, though.)

Retail toy prices seem to be rising, especially for licensed product.  As such, the best time to get this figure is probably now.  While future prices for carded/loose versions will drop, they will not drop below the retail price when you add in shipping.  It's a solid toy.  It is not a great collectible.  Standing on a shelf, the figure is well detailed and perfectly acceptable.  Beyond that, collectors would likely find little value in it.  As a parent, getting two of these guys instead one super articulated Black Series figure is a no brainer.  As a collector, paying double to get a super articulated version of the same figure is well worth it.  I don't think that serving two masters will be a strategy that is sustainable in the long term.  But, it's an interesting dynamic these days.  If you're a fan of the new film, this is a figure worth picking up.  Everyone knows who it is and the inherited, iconic look will ensure the figure's relevance into the future.  If Hasbro releases the figure again, it will likely be in at a similar price point.  It's possible that you will be able to get these cheaply on the second hand market in a few years.  But, for $8, the wait's probably not worth it.  I like this figure.  He's true to the origins of the Stormtrooper, but different enough that you know he's from the new Star Wars adventures.  Time will tell if that's a positive or negative.  That will be the most interesting part of this figure's history. 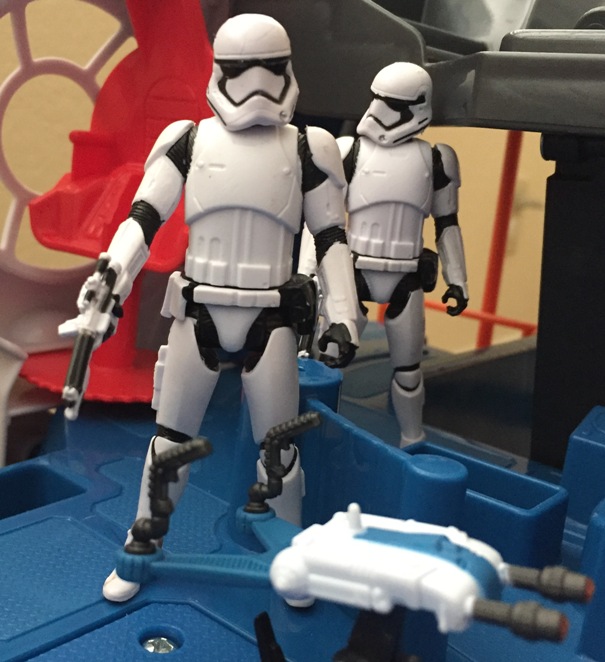 Posted by Robot_Sonic at 5:00 AM
Email ThisBlogThis!Share to TwitterShare to FacebookShare to Pinterest
Labels: 2015, Star Wars, Stormtroper