1987 was a good year for me.  It was a wet spring and summer that filled my pockets with lawn mowing money and there was lots of great stuff available on which I could spend my hard earned cash.  Throughout the spring and summer, it was rare that a trip to Target didn't net me some sort of new toy.  It might have been an '86 figure upgrade, a small battlefield playset or one of the many new figures that were released in '87.  My parents grew uneasy with the amount of money I was spending on toys.  But, I had earned it and it was mine to spend.  But, I got more and more pressure to reduce my buying as spring turned to summer in 1987.

Zanzibar looked intriguing as a toy when I first saw him in the 1987 catalog.  I found him at a local Kohl's store in the spring of 1987 and quickly snatched him up.  Zanzibar immediately became a favorite figure.  His cool pistol was fun.  But, the best part was the air skiff.  In the Joe world I had at the time, flying machines were very rare.  Outside of jet packs and a few jets, they pretty much didn't exist.  The reasons were mostly practical in that in made no sense for Cobra to constantly ground assault G.I. Joe headquarters if they had aircraft.  Take the aircraft away and the strategy made more sense.  Because of the lack of flight, little vehicles like the Air Skiff became incredibly powerful.  While Zanzibar could not outfit an entire legion of Cobra Troopers, the flying contraption made him a very deadly foe to the Joes.

Zanzibar would often swoop in just as the Joes were leaving the confines of their base to chase of the Cobras.  This left them susceptible to attack and Zanzibar was able to inflict heavy casualties.  (In 1986, Serpentor's Air Chariot had played the same role.  But, the Joes managed to shoot it down and, ultimately, kill Serpentor.  The '87 Cobra Commander made this possible.)  He became the most dangerous Cobra out there.  The Joes made him public enemy number one.  As the summer wound down, Zanzibar maintained his status.

In the early fall, I took a small batch of Joes with me when my parents rented out a cabin in Southern Indiana for a week.  I saw this time as one of the final Joe stories I would play out.  I'd be starting 8th grade in the fall and was too old to be playing with toys.  (On another note, it was during that trip that I first visited the college I would end up attending.  That 1987 visit was enough to pique my interest and a 1991 official visit cemented my attendance there.)  I found a stream in the woods and built up a dam.  Here, the small group of Joes and Cobras played out their final endgame.  In the skirmish, Zanzibar was finally killed.

Upon my return home, my interests turned to a more teen aged pursuits. One day, some friends and I found a few Joes and decided to hand them from a string out of the 2nd story window of my parents garage.  This left the figure dangling in front of a cinder block wall.  We all went as far away as we could we in the yeard and began to throw freshly fallen walnuts at the figures.  Zanzibar and Monkeywrench were the two figures who were chosen.  Monkeywrench was pretty much destroyed.  But, Zanzibar survived with just some minor scuffs and paint chips.  Around 1991, though, my little brother had dug my Zanzibar out of my closet and left it on the floor. My parents' new puppy found the figure and chewed off his arm and pulled out most of his hair.  Thus died the vintage Zanzibar.

Zanzibar's first comic appearance was in G.I. Joe #60.  It has a great cover and the story inside introduces a wide array of 1987 characters.  When I first bought the issue, though, it didn't sit right with me.  The artwork used was very out of whack with prior Joe comics.  It was too different from the artwork to which I had grown accustomed.  If you collected comic books in the early 1990's, though, there's a good chance you are aware of G.I. Joe #60 for other reasons.  At that time, comics drawn by Todd MacFarlane were widely collected and would sell for decent prices.  (At least, decent for recently published works.)  As such, you'd often see G.I. Joe #60 tossed in with MacFarlane Spider Man titles at various comic shops in an attempt to capitalize on the artist's popularity.  (When the Joe comic was cancelled in 1995, a special re-issue of G.I. Joe #61 with artwork from Todd MacFarlane that was not, originally, used in the issue was released as the final issue of the Joe comic.  It is worth a good amount today, but more due to the rarity and obscurity of the fan favorite title than Todd MacFarlane.)  It explained the bizarre muscularity of Chuckles in #60 and the rest of different artwork.

Zanzibar has great accessories...depending upon your definition of what his accessory complement consists of.  Not in dispute is the figure's pistol.  It is a larger weapon that was unique to Zanzibar.  The two components in question are the spear and hammer.  Many collectors consider these to parts to the Air Skiff rather than accessories for Zanzibar.  Others consider them part and parcel to the Zanzibar figure.  (It should be noted they were included in the bubble with the figure, implying they are part of him.)  When buying a "complete" figure, it's important to know if you are getting all the pieces you intend as the definition of completeness varies.  The spear and the hammer, though, are solid additions to the figure.  For years, the spear was used by a Budo figure on my cactus shelf: guarding an incense burner sculpted like a Mayan temple.  But, it remains a fun accessory for Zanzibar and is a slightly different notion of Dreadnok weapons.

The Zanzibar mold was used twice. Once for this original figure and then again in 2004 for the Convention Exclusive Zanzibar figure.  With the pirate motif in full bloom, it's doubtful that any of the parts could have been seamlessly integrated into any other figures.  And, there really is no need for more than 2 Zanzibar figures.  So, you can't say the mold was wasted.  This 1987 version is about perfect in terms of design.  (There is a variant on the V1 figure in terms of how Zanzibar's facial hair is painted.  One release is fuller than the other.  But, I'm not sure which variant corresponds to the mail away figure versus the retail release.)  The Convention figure is different, but not better.  So, there's at least something more than one release for the Zanzibar fan to track down.

Zanzibar figures are not expensive.  You can still buy mint in bubble figures for around $10.  (It seems there was a lot of overstock Zanzibars that made their way into the collecting world.)  Mint, complete with filecard figures can be purchased for around $5.  (You can still get sealed in box Zanzibar and Air Skiffs for around $20.)  For whatever reason, there is a large volume of high quality Zanzibar figures still out there.  The result is that the modern collector can get a solid figure for almost nothing.  That's a good thing.  Sadly, the cheap price will color this figure in the eyes of many collectors.  But, as I had the vintage connection, Zanzibar remains a valued member of my collection. 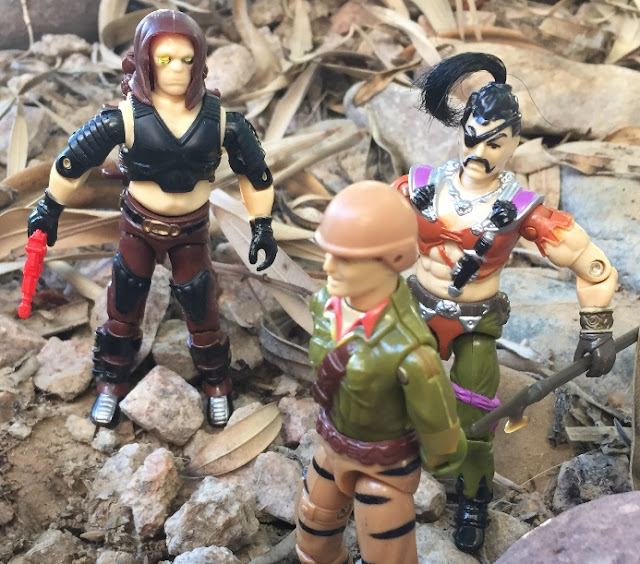 Posted by Robot_Sonic at 3:00 AM
Email ThisBlogThis!Share to TwitterShare to FacebookShare to Pinterest
Labels: 1987, Dreadnok, Vehicle Drivers, Zanzibar