In our house, Christmas of 1983 was spectacular.  There wasn't a Joe toy that wasn't under our tree.  In 1983, my youngest brother turned 5 and was able to have the last of a series of major heart surgeries.  My younger brother and I were shuffled off to spend the entire summer with our Grandparents and Aunt and Uncle in Ohio.  My youngest brother came out of the surgeries just fine and my parents were relieved to a degree that I can not fathom.  As such, my parents went hog wild on presents for Christmas.  Not only did we find tons of Return of the Jedi figures and vehicles under the tree, but pretty much the entire 1983 Joe line was there as well.  My Grandparents came over and bought each of us a few figures.  I could see Gung Ho and Snow Job through the tissue paper wrapping my Grandmother had used.  The presents sat there for a few days, waiting for Christmas morning and building our anticipation.

When the Christmas morning melee was done, our living room was stacked with unopened boxes of pretty much any toy collectors' best dreams.  Our neighbor, a father of three girls, came over and helped my Dad put together all of the new vehicles and the coup de gras: the G.I. Joe Headquarters.  My haul included the APC along with all the figures I was missing from the year.  My youngest brother got the Wolverine.  As it wasn't mine, I didn't pay it much attention for a while.  But, as the year progressed, I grew interested in the Wolverine's potential.  Soon, though, I became flummoxed by the Wolverine's limitation as a toy.  It only held one figure.  On top of that, once the 12 missiles were expended, it was unarmed.  Plus, my brother had broken off the top piece that held the missile launcher to the base: rending the launcher unable to stay pointed any direction but down: directly at the vehicle's body.  As such, the Wolverine fell out of favor.

Cover Girl, though, had a different fate.  At first, I only would use the Wolverine's intended driver with the vehicle.  Cover Girl found a home in this role.  Without a sidearm, though, she was an afterthought if she were out of her vehicle.  However, before I could really develop the character, Cover Girl disappeared.  The figure simply vanished.  While things got lost in our house all the time, they were usually things like small accessories that likely ended up in my mother's vacuum.  It was rare to lose a figure.  One might be gone for a while.  But, once I realized it was gone, I would go on a search of my room, my brothers' room, the toy room, under the living and family room couches and through the basement.  These long searches would almost always find the figure or part that was missing.  Cover Girl, though, never turned up.  I scoured the house and interrogated my brothers.  But, no one had any clue as to her whereabouts and no one had any recollection to removing her from the house.  Thus, Cover Girl forever disappeared from my childhood G.I. Joe collection.

In the grand scheme of things, I think these mysterious, missing figures all evened out.  In later years, a perfectly conditioned Flash, a Track Viper, a Salvo and a complete Tiger Force Recondo all entered into our collection with no knowledge of their acquisition.  Maybe they were left behind by my brother's playmates.  Maybe my Cover Girl was left at one of my brother's friends houses and they simply forgot they even took her there.  But, had Cover Girl not vanished, it's unlikely I'd have anything to say about her.  She is certainly not as cool as the regularly carded 1983 or 1984 Joe figures.  And, she would likely have been relegated to "bottom of the box" duty to only come out when I had no other figures available.  It's odd that her story is one of absence.  But, it has kept the figure in my mind for over 30 years and given me a chance to reminisce about a great time in my life.

As a mold, Cover Girl certainly has limitations.  The body mold is fairly strong with lots of nice details.  The head sculpt, though, is not good.  Cover Girl's head definitely shows the sculpting limitations of the time.  It is overly large with close cropped hair.  You realize how much of a leap forward the 1984 Baroness figure really was with the separately sculpted hair piece when you look at Cover Girl.  Her pursed lips give her a sterner appearance than you'd expect from a former fashion model.  But, that might be the reality of the male dominated 1980's military.  The coloring is very well done with earthy browns juxtaposed with splashes of bluish grey detailing.  She does have painted flesh hands, which are both prone to paint wear as well as general breakage.

While Cover Girl was relegated to a vehicle driver role in the U.S. and Canada, she found a second life in South America.  The mold was used to create a new character named Sparta in both Brazil and Argentina.  On top of the new character, the mold was also released with new artwork as a single carded figure.  Both Sparta figures are heavily reminiscent of the American Cover Girls, but are still different enough to be worthwhile additions to any collection.  The great thing for American collectors is that large caches of carded Sparta figures from both Plastirama and Estrela were found in the early 2000's, putting large quantities of the figures into the collecting community.  The mold likely died in South America.  Were it available, it's likely it would have been used since Hasbro released multiple Scarlett, Lady Jaye and Baroness figures.  A high quality Cover Girl repaint would have been nice.  Even if the character had been named Sparta, but been given a completely different paint, it would have been a great way to update the mold.  But, collectors have a couple of options for the figure that, while somewhat expensive these days, aren't all that hard to find.

In the 1990's, before the rise of the internet, all female figures from the Joe line were considered "collectible".  This attitude carried over in the 2000's, even though it was now evident that the female figures from the line didn't exist in substantially different quantities than their male contemporaries.  But, it made Cover Girl figures expensive.  In those days, she was a $20 figure all the time.  As the 2000's wound down, the figure got substantially less expensive.  Now, though, she is fairly pricey again.  Mint and complete with filecard figures sell in the $22 range.  You can get a mint figure for around $17.  If you sacrifice a little condition, the price falls pretty drastically.  But, it rare to find a nice Cover Girl for under $10.  So, she's going to cost you.

In the days when Plastirama Spartas were available MOC for $10, that was the way to go to get the mold.  Now, though, Spartas are more expensive, so Cover Girl is the preference if you want the mold.  For the price, the figure doesn't seem worth it.  The mold has limitations.  But, females are few and far between in the vintage Joe line.  So, Cover Girl's lone appearance makes the mold more desirable than if she had been revisited as a repaint or an updated character.  The lack of childhood connection has left this figure as an outcast in my collection.  But, it's nice to have her around for the rare occasion when her appearance makes sense.  I doubt I'd pay the current prices to acquire a Cover Girl.  But, it's also unlikely I'll part with the one I have. 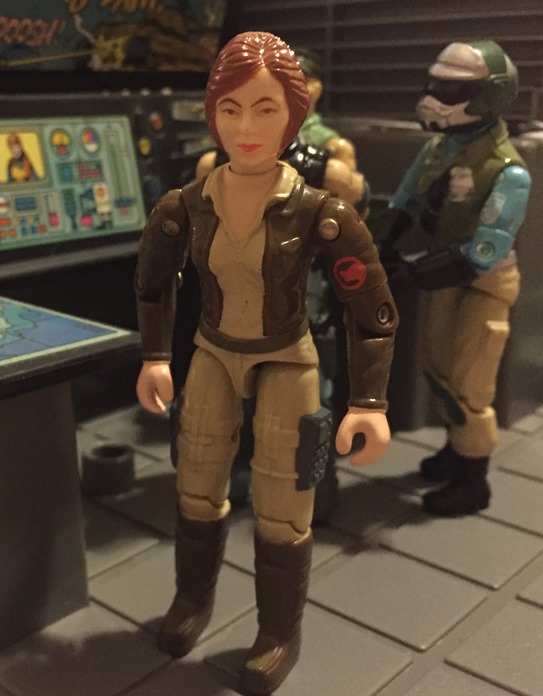 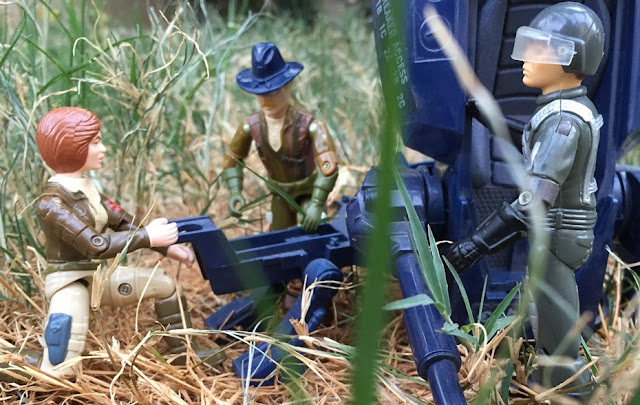 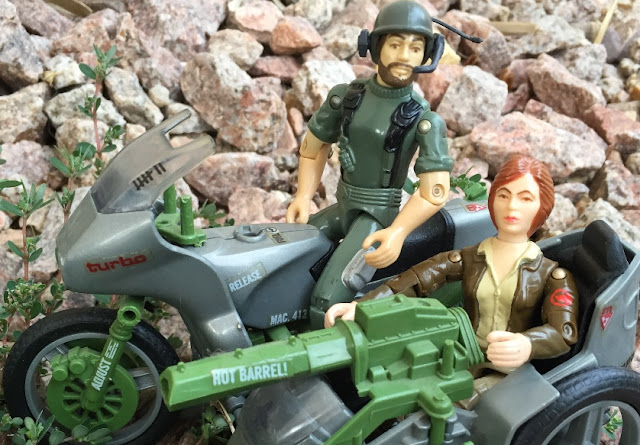 Posted by Robot_Sonic at 3:00 AM
Email ThisBlogThis!Share to TwitterShare to FacebookShare to Pinterest
Labels: 1983, Cover Girl, Vehicle Drivers