Plastirama is well known for their weapon variants.  While some figures are pretty tight and always include the same gear, others see quite a bit of fluctuation in terms of what may be packaged with the figure.  When the Plastirama overstock was common in the early 2000's, collectors had their pick of figures with the various weapons.  I didn't pay too much attention to the variants.  And, I got a Sparta with Footloose's rifle instead of the M-32 from her card art.  As they were $10 figures at the time, it wasn't a huge deal since I could get another at any time.  The more problematic releases, though, were the ninjas.  These were tough as there were several variants among them, they were $20-$30 figures at the time, and it was tough to determine which gear would look best with each figure.  Black 1984 Stormshadow gear was not uncommon in the early 2000's.  So, figures with black gear seemed blase.  The silver and golden Stormshadow gear that was available was far more appealing to me.

Satan's main difference is that figures either include golden weapons or black weapons.  Most figures include both the bow and the pack.  But, you can find figures with just the bow.  At the time, neither variant seemed overly desirable.  And, both were very available.  Now, though, the golden weapons seem to be more common.  But, due to the limited supply in the market, this could be just a function of what's available right now and could change in a year or two.

There is also a 3rd variant where Satan includes silver weapons.  These silver versions were included with Cobra De Hielo.  It's possible that the silver inclusion with Satan was just a quality control error that occurred from time to time.  Plastirama was not too high on being consistent with their accessory complements as the line ran out of steam.  Both the black and gold bow, though, appear to be unique to Satan.  I haven't seen any Ninja Ku figures that didn't include golden accessories (and, he did not include a bow) and Cobra De Hielo appears to have only been available with silver gear.  But, with Plastirama's notoriously bad quality control, it's possible that there are some samples out there with different colors and the Cops or Jhony Quest figures may also have had oddball combos.  (Cops, in particular can have haphazard weapons.  There were stories of people finding 20+ of the same weapon in some boxes.)  So, be on the lookout if you're a loose collector and determine which gear you require to consider the figure complete.

Oddly, the black accessories are probably the most rare configuration for Satan.  Black Stormshadow gear was not available with any other figure released by Plastirama.  So, its inclusion with some Satan figures is unique.  You'll note the different positions for the backpacks in the bubbles below, too.  Sometimes, you get the pack in the traditional accessory bubble above the figure.  Other times, you see the back packaged in the figure bubble. 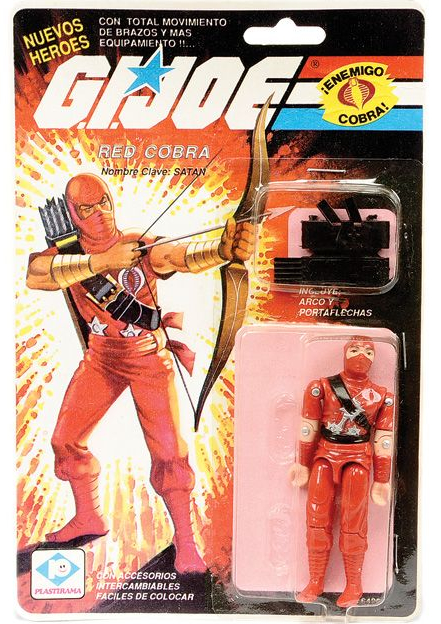 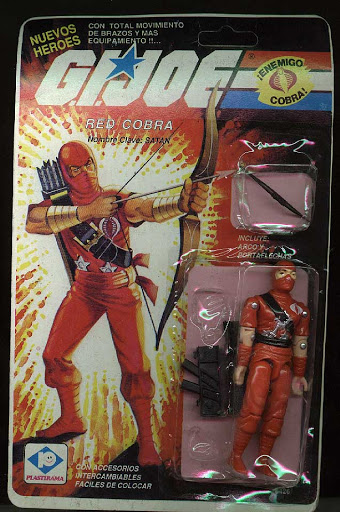 These appear to be the most common color for Satan figures.  As the golden color is unique to Argentina and the bow only appears with Satan, it's the generally accepted default for loose Satan figures you might find in Argentina. 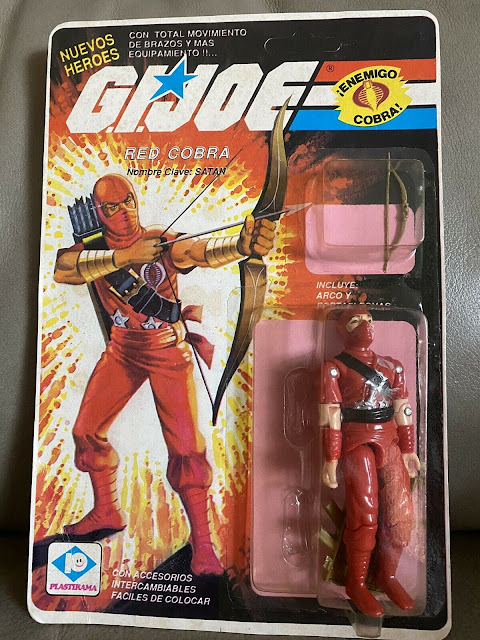 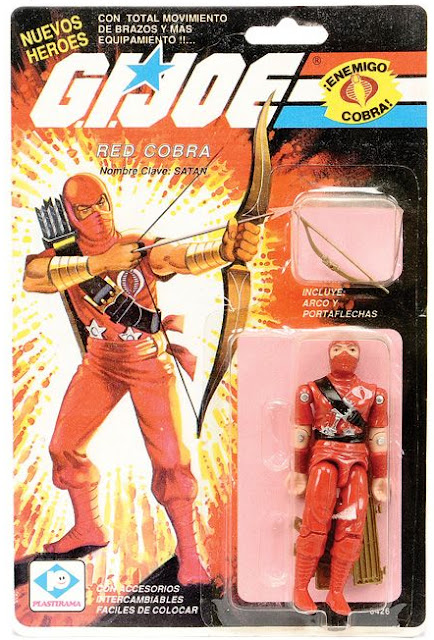 Silver gear appears to be the least common color to be included with Satan.  However, you can get silver packs and bows with the less desirable Cobra de Hielo.  So, the overall availability of silver gear is much higher than its appearance with Satan would suggest.  With silver so tied to the De Hielo figure, it's my least favorite combo with Satan. 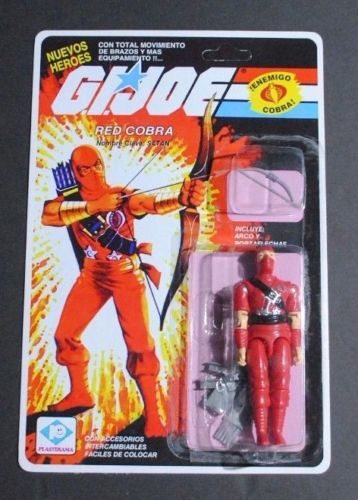 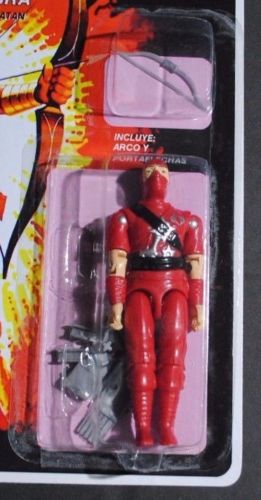 There are also Satan variants where the figure does not have the backpack.  It seems the backpack was often omitted from all three of the ninja figures released in Argentina.  So, you could claim the figure was complete with just the bow.

Both the black and golden bows appear to be mostly unique to Satan.  Ninja Ku did not include a bow.  And, I've not seen any Cobra de Hielos with non-silver accessories.  (Though, that doesn't mean they don't exist.)  So, both bows should be considered unique.  In the days when these were $30 figures, it made sense to look to own both.  At $1000+ today, that's less likely to be something that is worthwhile.