After the remarkable figures that came out in 1985, it was going to be nearly impossible for Hasbro to top itself. Rather than do this, though, they decided to reinvent the Joe team. 1986 was the beginning of the replacement figures. Many 1986's had similar or exact same specialties as earlier characters who had been removed from the shelves. This was the first year where the real turnover occurred. Many of the figures they produced, however, were excellent. The 1986 Wetsuit is no exception. While Torpedo was a great figure, Wetsuit added new accessories that made him every bit as much fun to have as the Eels are.

I loved this figure. He was my favorite diver, until I got the Mission to Brazil version the next year. Still, though, this guy is pretty high on my list. I was especially pleased that Hasbro included him in the 1998 Navy Seal Team set. I loved setting him against my Eels and the Cobra Hydrofoil. I had too many adventures to even try and recall with Wetsuit, Torpedo, the Hovercraft and the Hydrofoil. Even without a pool in my backyard, I managed to get extended use of all the divers and boats that were in the line.

Wetsuit's uniform is pretty good, though he seems like more of a tropical diver. (You'll have to forgive me for the quality of this scan. I was experimenting at the time and, as you can see, this particular experiment didn't turn out so well.) I'm always a sucker for figures with hoses that attach to both the figure and a pack. In my opinion, this was a feature that wasn't used on enough figures in the line. Those that did have it, tend to exist in multitude in my collection. The orange accessories work with this version of the figure, though he also looks good with the black versions from 1998. Had Wetsuit come with a gun of some type, he would have been off the charts. Fortunately, I used the Torpedo's gun from an accessory kit with him. It looks kind of funky, but will grow on you in time.

The Wet Suit mold has only been used by Hasbro. After the 2 vintage releases, it was dusted off in 1998, 2001 and 2002. At this point, we have pretty much all the Wet Suit figures we need. Still, it would be kind of nice to see the character brought back in land based military attire (like the underrated and hard to find '04 Torpedo figure from the VAMP). It would be a good way to bring some versatility to the character without using the limiting, original design.

Wetsuits aren't too tough to find, but they can cost a little more than the average figure, especially if they are complete. 1986 was still during Joes peak popularity and all the figures from this year are very plentiful. Some dealers will use the "it's an old figure" routine to try and secure a higher price. Don't be fooled. These figures exist in abundance. With minimal effort and expense, you can add this guy to your collection. 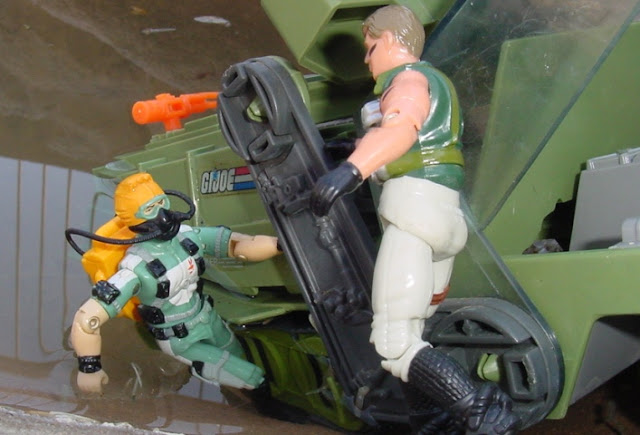 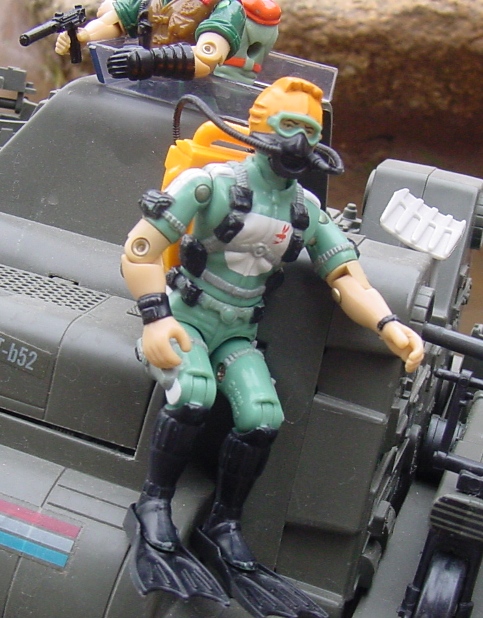 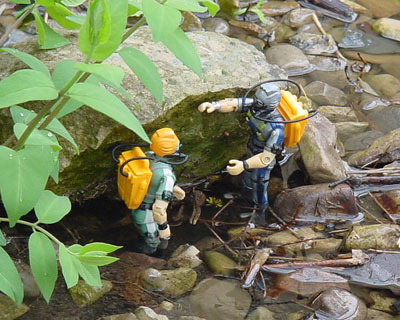 Posted by Robot_Sonic at 5:09 PM
Email ThisBlogThis!Share to TwitterShare to FacebookShare to Pinterest
Labels: 1986, Wet Suit