We've already discussed the infamous Mission to Brazil set when I profiled Claymore. While I wasn't too impressed with that figure, I thought it time to showcase the one figure that made me want the entire set, the Wetsuit. The original Wetsuit was awesome. This guy, though, was off the charts. They had finally cast a diver in colors that were perfect for military operations. I was always hesitant to use the original figure in combat situations was I thought his orange highlights could be a bit detrimental if he were trying to sneak up on someone. This figure kind of solved that. The only problem with him was that they included the original Wetsuit's accessories! You now had a dark silver diver with bright orange tanks. I managed to somewhat fix this by giving him a pack from a spare Eel. It worked, but wasn't the best solution. I had to wait until 1998 before Hasbro finally released these accessories in black. Since the Navy Seal Teams are still ubiquitous at all my area Toys R Us stores, you should be able to get some of them before they disappear as well.

This guy was one of my most used figures. For most of 1986 and early 1987, I had a running sea based story line going. This figure was the common diver troop who did most of the fighting against Eels. Since the color scheme matched, they worked perfectly together. The original Wetsuit was the sometimes leader, but this guy got most of the use. (You can still see his battle scars in the worn paint on the face of this specimen.) I used all of the Mission to Brazil set as specialty troopers. It made it fun to actually allow Cobra to kill off good guy cannon fodder. It kind of evened things out. The dark silver wetsuit with the black and olive drab highlights were very realistic. At least once, I swapped this guy's head and made a custom figure that was a diver after he boarded a ship, discarded his helmet, and was using his assault rifle. This guy, like the Eel, has such a good color combination that you just want to find excuses to use him.

When I first saw the Mission to Brazil set, I kind of wanted it. Claymore looked kind of cool. This guy was awesome. The Leatherneck had uses and I wanted another Mainframe for my headquarters. The Dialtone had a great upper body, but his red pants kind of killed him. As weeks wore on and I went to TRU more and more, the set began to wear on me. I always looked at it, but could never decide if I wanted it or not. Since I was very up on all the figures and had completed the 1986 series much, much earlier in the year, I didn't have much of anything to look forward to at Christmas. (My parents had already made it very clear that the Shuttle was out of reach. There were no other medium to large vehicles that came out that year.) I finally broke down and asked for this set. Of course, Hasbro released many of the 1987 figures in time for Christmas of 1986 and I would have gotten some figures anyways. At least this worked out, though, as I got the set I wanted. Once I had it, it was a decision I never regretted. I used the MTB figures more than I used their original counterparts. For whatever reason, I just wanted to have some common figures that weren't already characterized. The Wetsuit character already had a figure. With this guy, I got a free figure to use as I wanted. What resulted were some of the best memories I have of my entire Joe collection.

The Wet Suit mold is a Hasbro favorite. It was used twice in 1986, in 1998, 2001 and 2002. His arms were used in 2004 on the Anti-Venom Mutt The character has continued to appear in more modern Joe lines, too. Wet Suit does not have any foreign variants (which is probably why his mold was so commonly used by Hasbro in the first few years of the line) and was only released with Hasbro created figures. Of all the colorings of this mold, though, I still hold this version to be the best. He does look a lot better when you give him the black accessories from 1998 or 2001. But, the overall figure is probably the strongest of the Wet Suit versions. At this point, there isn't much need for additional renditions of this mold. It has been done well enough through the vintage and modern years to satisfy most collectors.

These guys, like all of the Mission to Brazil figures, are pretty tough to find. While this guy isn't nearly as expensive as Claymore, he is still pricey. (I really don't get the dramatic difference in prices of the MTB figures. They were only available as a set. While Claymore is the only original figure, I, and many other collectors, consider the Wetsuit to be the far and away best figure in the set. He is usually the second most expensive figure, but is still about three of four times less than Claymore.) This guy is worth the money. He is an awesome figure that makes an excellent army builder. Unfortunately, his price is a bit prohibitive of my doing so. Nonetheless, this is a figure of which I would like to have a couple more. The Navy Seal Team helped me a bit, but this guy has sentimentality attached to him and that keeps him as my all time favorite Joe diver. 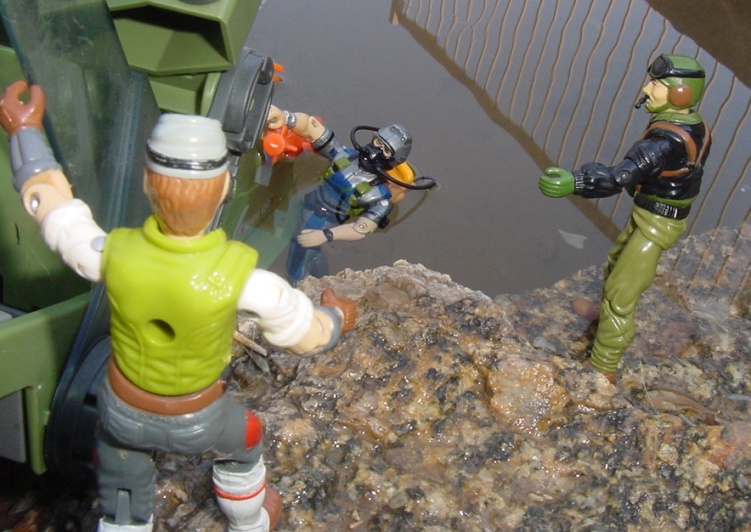 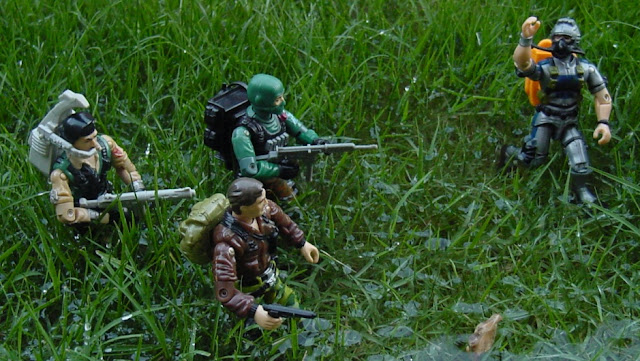 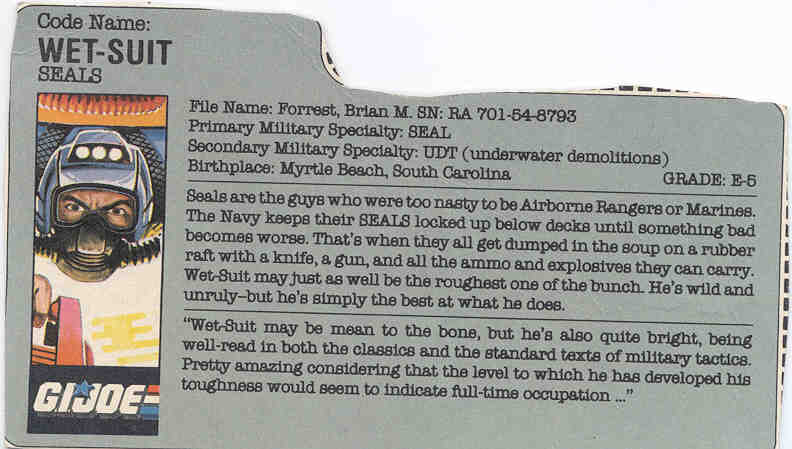