I vaguely remember the Major Bludd mail away offer. I do remember that I thought the guy sounded really cool, but I don't think my mother went for his name. As 1983 progressed, though, my friends began getting the new Joe figures. I was mainly into Return of the Jedi figures at this time, but my interest was waning. One of our neighbors got Destro, the Hiss Tank, the FANG, and Major Bludd for his birthday in August. I had recently discovered Airborne and found these new enemies awesome. I put Bludd in the Fang and had a fabulous time. For some reason, Destro never did it for me. I didn't like the metal head. Major Bludd was the enemy that I wanted to use. His specialty, Mercenary, was just too cool. I thought all the dog tags he wore were from the people he had killed. My Major Bludd was a bad ass and couldn't be stopped. I used his armored arm as a bionic extension that had super strength that would pulp Joes' necks.

I got a Bludd for either my birthday or Christmas of 1983. That figure died a quick death. He didn't last a year. In 1984, though, I got another one for my birthday. At this time, my mother was a teacher at my grade school. She decided to host the Christmas party on the day we got out of school. In order for her to pull this off, though, my brothers and I were relegated to the basement for the duration of her party. Of course, we took a full box of toys down with us. Among them were my brand new Hovercraft and Major Bludd. During the course of the day, my brand new Major Bludd disappeared. I don't know what happened to him. He never came out of the basement. For years, I maintained that he must have been eaten by this horrid '70's yellow and green disco couch my parents had hidden down there. I almost tore that thing apart, but never had any luck. As it turned out years later, my younger brother took this couch off to college with him. When he graduated, I knew the couch would meet a fiery end in the University of Dayton's famed "ghetto". I asked him to look for Major Bludd before the thing went up. Alas, there was no Bludd, and if he was hidden in the bowels of that couch, he is now among the cinders of many a valiant piece of furniture that had met its end during the pandemonium of graduation week at UD.

In 1985, I managed to get the Bludd you see here. I kept him rather well as I was now more interested in many of the new Cobras that were coming out. I was also more careful with my toys by then and have managed, to this day, to keep most of post '84 stuff in fairly good condition when you consider the amount of use all my figures received. Bludd remained high on my play list for many years. When I discovered the comic, I liked Bludd's character. It was a shame that he was only utilized for a short time. At least his run, which included the murder of General Flagg, was memorable. I made my Bludd fiercely loyal to Cobra Commander. He remained the Commander's enforcer after I made up the character that was portrayed by Sea Slug. I had many battles where Bludd's well timed appearance kept Cobra from disintegrating around the various factions I created.

Bludd had three incarnations, but this original one is my favorite. The '90 Sonic Fighters version is pretty cool, but the '94 version leaves a lot to be desired. (On a side note, I have a prototype of the '94 Bludd figure that can be seen at YoJoe.com.) I managed to pick up a junker version of this figure at some point and had him, the original Destro and the original Cobra Commander displayed on a Hiss tank in my room at my parents' house. When the chance to get a bagged version from Hasbro Canada came up, I jumped on it. With this figure, I moved my good Bludd back into my rotation. It was like getting an old friend back. I still rank this figure very high. Some characters and figures can't be improved upon. Bludd is one of them. His design was basic and color scheme simple. Still, it created one of the more enduring figures in the line.

After Major Bludd's appearance in the American line, the mold was sent over to India. There, the figure was released in a highly distinctive blue and yellow color scheme as well as in a brown and black paint job that is very similar to his American figure. Funskool stopped producing Bludd early in their line, though, and the blue and yellow figure is one of the more difficult international exclusive figures to track down. The whereabouts of the Bludd mold, though, is a mystery. Almost all of Bludd's Funskool contemporaries like Firefly, Baroness, Stalker, Snake Eyes, Torpedo, Snow Job, Zap and Gung Ho were returned to Hasbro for the 1997 and 1998 series. In fact, of the figures released with Bludd in India, only Scrap Iron's mold remained there and was not used in the U.S. until Funskool gave it back to Hasbro in early 2003.

So, did Funskool simply not send Major Bludd back to Hasbro? That seems unlikely since the figure disappeared from retail in India as well. (Funskool produced Scrap Iron on and off for several years.) More likely, the mold was returned to Hasbro and Hasbro decided, for whatever reason, to not use the mold in the original commemorative series. Instead, they replaced the dated '83 mold with the '91 Sonic Fighters mold in traditional colors when they opted to release the character in 2001. It is also possible that the original Major Bludd mold returned from India damaged and we will never see the original version of Bludd again. Either way, I feel this is a mold that was simply done right the first time. There really is no reason to revisit it and I prefer the more modern versions of Bludd that we've seen since 2000.

Major Bludd figures used to be expensive. He was one of the first figures to ever be offered, but he was also available as a mail order figure for many, many years. I think one of the reasons Hasbro only made three versions of this figure was because they made him so available from Hasbro Direct. Of course, this now means that you can find Bludds both loose and MIB for not terrible prices. Granted, this guy is going to cost you a bit more than you expect to pay for some other jobber figures from 1983, but he won't set you back as much as many of the other figures from his time period. Remember, this guy was also available from Hasbro Canada in early 1999, so there should still be plenty of bagged samples, like the one you see here, out there for decent prices.

Bludd is also interesting in that there are two distinct versions of his filecard. For some reason, they changed the poetry sample in the bottom section. You can view both of the filecards here.

Major Bludd is one of my favorite figures. However, I am only after a carded sample of him, as that is all I am missing. Unfortunately, that is a bit out of the cards right now. Maybe next year. If you have any interesting anecdotes about any of your favorite figures, Email me. 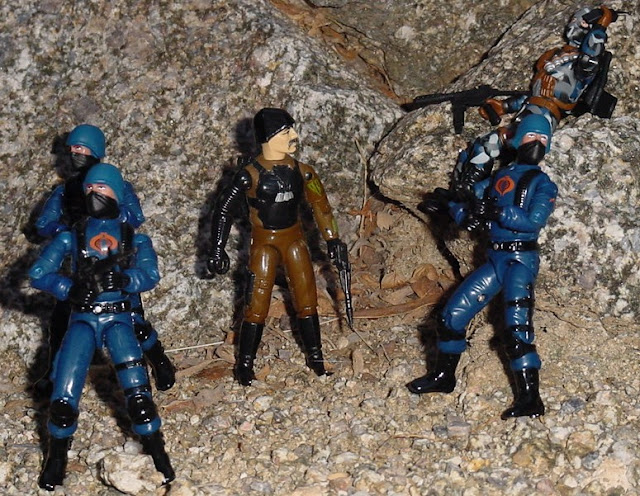 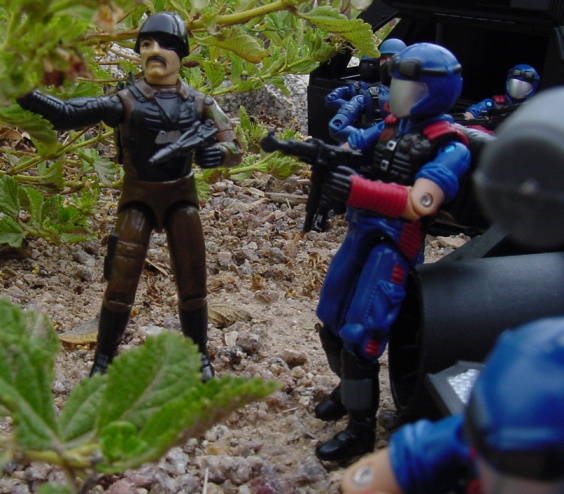 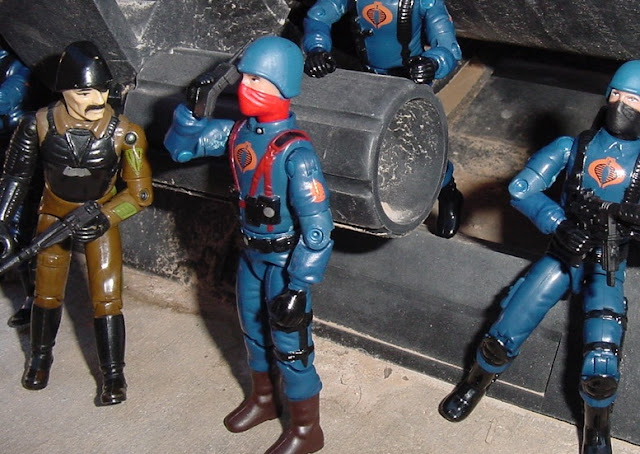 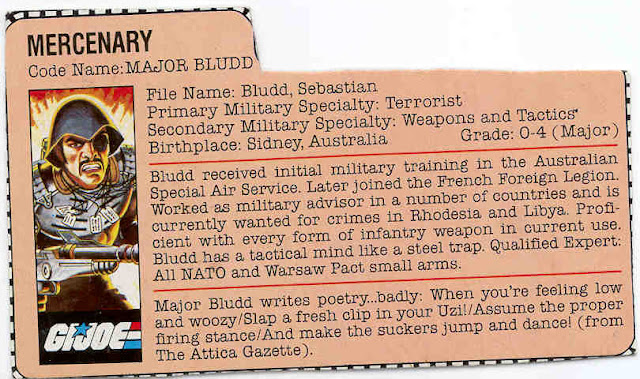 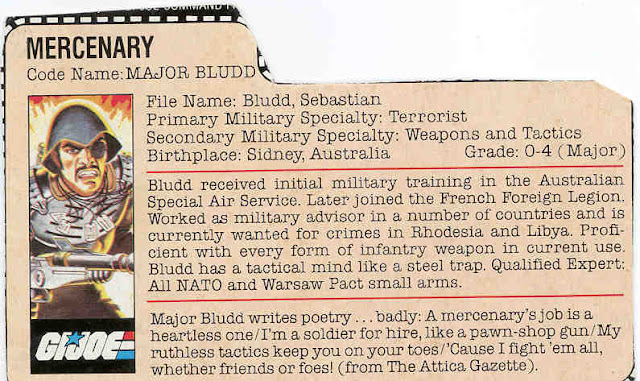 Posted by Robot_Sonic at 6:20 PM
Email ThisBlogThis!Share to TwitterShare to FacebookShare to Pinterest
Labels: 1983, Major Bludd