Most subsets that were released in the Joe line are held in high disdain by modern collectors. Many, like Eco Warriors, Star Brigade, Slaughter Marauders, Cobra La, etc., have a special place in many Joe collections, at the bottom. Before the nonsense picked up serious steam, though, In 1988, Hasbro came out with the Iron Grenadiers subset. This was a group controlled by a now independent of Cobra Destro. They had their own army, equipment, and agenda. At long last, G.I. Joe had an enemy other than Cobra to deal with. Almost every figure released in the Iron Grenadiers are awesome. The Iron Grenadier figures themselves are a better version of the original Cobra troops. The vehicles were ultra modern, but made for very cool toys. From those vehicles, the AGP, is where we get this figure, the Nullifier.

This figure is as forgotten as they come. Since he was a pilot in a bizarre flying contraption, he doesn't see much press nowadays. However, this figure has become an integral part of my Cobra legions. When you take him out and start using him, you realize what a great figure this is. The guy has a tight helmet, (Plus he does have a face shield, but I don't have one with any of my Nullifiers.) cool body armor, and a size to him that makes him look like a badass. This guy is my Cobra enforcer. He carriers heavy weapons and only appears in special circumstances. I use him as a guard for high ranking officials. His mold has all the trappings of being highly modern and full of surprises. The complicated grooves on his torso armor also allow for some creative license when developing his back story. I use a couple of these guys as support for lesser Cobra forces. When they need some serious firepower, the Nullifiers come in and clean everything up for them. These guys help keep the younger, more inexperienced, and more poorly equipped Cobra forces from getting in over their head. As this is their primary usage, these guys work great in tandem. Two of them are the perfect support for a group of Vipers that are in too deep.

The AGP is a pretty fun aircraft. I currently keep mine piloted by an Astro Viper. I just can't, in good conscience, have an aircraft piloted by any figure that doesn't have a removable helmet. The death scenes with removable helmet figures are just so much fun to ever have a pilot without one. The pod is small, has a couple of big guns, and comes with four missiles. I don't think it has much basis in reality, but it is typical of the Iron Grenadiers vehicles; it is a very fun toy, if not entirely realistic. I have found that it has become one of my more frequently used Cobra aircraft. I much prefer smaller aircraft. They are more fun to play with as you can hold the bad guy in one hand the good guy in the other. I do like the Rattler, but other than that, I have found most of the big planes to be very worthless toys if you like to play with them off the ground. Don't get me wrong, an airfield diorama is very cool, but acting out dogfights is kind of a waste of time if you only have the big planes. The smaller aircraft, such as Firebats, AGPs, Skyhawks, and Mud Fighters make up the majority of my primary air wing. They engage each other in combat all the time. On special occasions, my Hurricane VTOL or P-40 Warhawk from the Sgt. Savage line (A great concept with cool vehicles, but in the wrong scale to be truly compatible with Joes that came out in 1995) come into the fray. For the most part, though, smaller planes engage each other in far more entertaining battles than a pair of Skystrikers and Night Ravens could ever.

Nullifiers are a weird figure. You don't see them that often, but not many people look for them. If you take the time to seek them out, you can find these guys without too much difficulty. They aren't expensive, as they aren't all that popular. Since these guys weren't officially Cobras, the prices don't rise meteorically due to a small painted sigil. Finding one complete with his faceshield can be a bit of a challenge, but the figure works well without it as well. If you can find these guys, they make nice army builders, both for Iron Grenadiers and Cobra. You will have to outfit them with some weapons from your reserves, but I have found that the black version of Airwave's rifle that came with the 1993 Leatherneck is a perfect gun to transform these guys into the heavy hitters for which I use them. They have become an integral part of my armies. If you give them a chance, they can become favored figures in your collection as well.

I need this guy's faceshield. If you can help, email me. 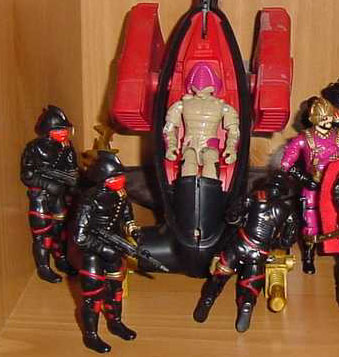 Posted by Robot_Sonic at 11:31 AM
Email ThisBlogThis!Share to TwitterShare to FacebookShare to Pinterest
Labels: 1988, Iron Grenadier, Nullifier, Vehicle Drivers