Any fan of the comic, and most fans of G.I. Joe in general, know of the Oktober Guard. They were introduced way back in G.I. Joe #6 and continue to play a part in the line even as recently as 1998. For whatever reason, though, Hasbro was never inclined to produce Oktober Guard figures during Joe's heyday. Perhaps Cold War tensions were too high. Maybe Hasbro didn't want to upset the delicate balance between Joe and Cobra. The speculation as to the Oktober Guards omission runs high. So, while we were never treated to the original Oktober Guard lineup in figure form, Hasbro did, in 1991, finally release a Russian character: Red Star.

By 1991, the Cold War was history enough that a Russian figure would not upset delicate sensibilities. Of course, though, Hasbro did offer a little snafu in this guy's production. The earliest Red Star figures were released with Cobra packaging. (In 1991, Joes were packaged on blue backing while Cobras were on Red.) His filecard had a Cobra sigil and everything. I guess this, though, that this "error" was caught quickly and Red Star was re-released on Joe packaging with a Joe logo under his picture. I don't know if that was Hasbro's way of saying they wanted to release Russian baddies, but weren't allowed to, or if it was just a simple error. Either way, this is a very nice figure that is fun to use.

This figure is very nice. Hasbro was kind enough to do all the Joe customizers of the world a great favor when they included the striped Russian undershirt on this figure. As such, Red Star's torso, and the rest of him, are staples in customized Oktober Guards everywhere. He also has a decent color scheme and cammo pattern. What makes this figure, though, are his accessories. They are simply awesome! Red Star comes with an AK-47 that is actually superior to the original 1982 version that came with the Cobra Officer. This gun has become a staple of my collection and is used with dozens of different figures. It looks good with just about anyone. (I only use the '91 Mercer with this gun since his own accessories suck so bad.) Red Star also has a removable hat that works very well. Without the hat, his head is kind of big and balloonish. With it, this figure is very cool. His pack is also another accessory that I use for many different figures. It is nicely detailed and comes with both an attached antenna and a knife sheath. (There are also two distinct coloring variations on Red Star's back. There is both a light brown color, and a darker brown. In my opinion, the darker brown works better with the black antenna, but the lighter brown works better on the figure.) The final accessory that Red Star has is a small, belt fed, hand held rotary cannon. While it is a bit unrealistic, it is another fun tool for this guy to use. The gun attaches to the back via an ammo belt that then attaches to the pack. It just provides another way to enjoy this figure. (Plus it allows him to give up his AK-47 to another figure and still be armed.)

Red Star is a figure that has found some time in my collection. After the mold was re-used for the 1998 Col. Brekhov, I rediscovered this original figure. He sees use as both a crusty old soldier whose experience outweighs his combat slowdown, or as a villain. This guy works very well as the leader of a group of insurgent rebels or urban toughs. I think that is why I like the figure so much. He is versatile and adapts to other scenarios. He is not one of my most used figures, but does get more time than the vast majority of the Joes I have. Like most of the figures I tend to like, Red Star doesn't get used as the character we collectors were given. I have given him his own personality and character that allows me to enjoy the figure that much more.

The Red Star mold has gotten quite a bit of modern use. It was used in 1998 for Col. Brekhov and then again for the same character in 2005. (Only this time with a new head.) It was also used for the 2005 Stormavik figure. It has been used for so many Russians that the mold has started to become a parody of itself. And, that has lessened the value of the original Red Star. Instead of seeing a high quality, vintage mold. Collectors now see another overused mold that comprises too many characters. It's a cruel fate for this figure, but the reality of the modern collecting world.

Red Star, along with the Bat are the two easiest 1991's to find. They are everywhere. Even with all his tiny accessories, Red Star is easy to find both mint and complete. Even carded samples can be had for under $12.00. This is one of the few '91's that is very easy to find. He and the aforementioned Bat often are the only '91's to appear in lots that heavily focus on either earlier or later years. Beware, though, of the Cobra packaging variation. While not as rare as some dealers would have you believe, this carded figure is a bit tougher to find. The figures, though, are indistinguishable. If you buy loose figures, you can build an army of Red Stars with little effort and little money. Since his accessories are so nice, this is one figure of which I don't mind many multiples.

I don't need Red Stars, but do think he's a nice figure. Do you think this guy should have been a Joe or a Cobra? Let me know. 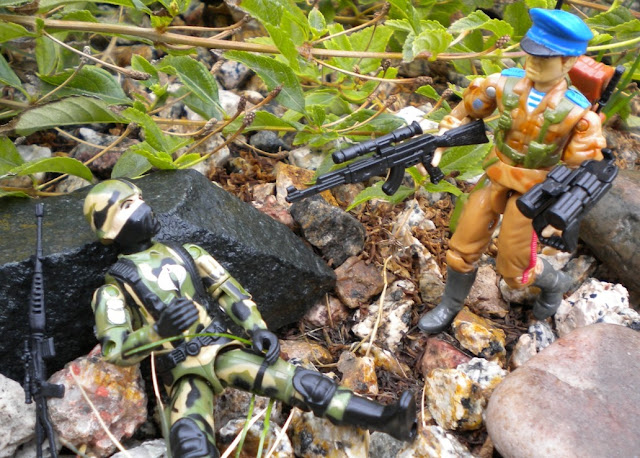 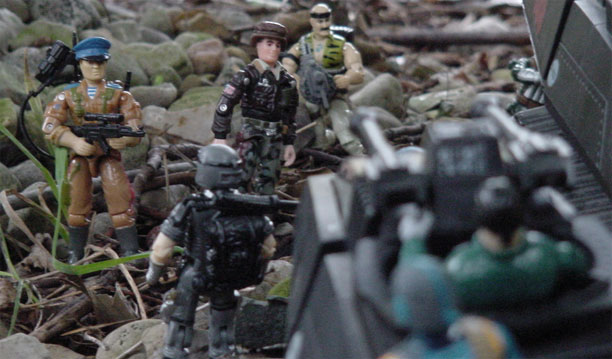