Back in 1990 and 1991, I used to watch a couple of kids that lived down the street from me. They were into Joe and had many of the figures from those years. As I was not purchasing any figures at the time, they introduced me to some great looking figures like Recoil and Big Ben. One of the few Cobras they had, though, was a very cool figure for whom they only had his gun and one leg missile launcher remaining for: Metal Head.

The original Metal Head was a figure I wanted, but I couldn't bring myself to visit a toy store. As such, it wasn't until just a couple of years ago that I finally added him to my collection. However, back in late 1994 or early 1995, I managed to find the figure you see below at retail. He was a new version of Metal Head, and was one of the few Cobras who were available at that time who I felt had a decent enough color scheme for me to purchase him. Once I had him, though, this guy became a vital part of my Cobra army. I've mentioned many times that my Cobra is now lead by a new, young, dynamic group of villains who, while loyal to Cobra Commander, are out to make their own mark against all that is good. So, rather than use this figure as Metal Head, he became an all new character who was a ruthless criminal whose only loyalty is to the star of this new crop of Cobras. This guy is not dangerous in the sense of plotting against the Joes, he is one who actually carries out the orders.

Back when I only had about a dozen and a half figures from which to choose, this guy got lots of use. Any more, though, he has fallen the wayside. I found him in the very back of the 1994 drawer. I think, though, that he will start to play a more significant role in my collection. I've been searching for some figures who aren't normally showcased to portray Cobra bigwigs. This guy will be perfect. The subtle purple and silver highlights perfectly complement Metal Head's basic black uniform. He also has tons of gadgets and geegaws all over him that make him look like a dangerous enemy. Plus, his head is great. The maniacal grin reminds of the character with the rictus in one of the issues of G.I. Joe Special Missions. He just has to be used as an over the top villain. I'm getting the feeling that he may have a significant role in my collection in the weeks to come....

From the very beginnings of this site, I have tried to portray many of the '94's in a new light. While I think the bad reputation the final years of the line have acquired is appropriate for 1993, I do not think 1994 should be considered a bad Joe year. It is chock full of great molds, subtle color schemes and remakes of popular characters that deserve more collector attention. Figures like this guy, Shipwreck, Stalker, Viper, and Dial Tone are all great remakes of classic figures. They can also, though, stand by themselves as some of the better figures in the entire line. In time, I think many of these guys will get their due. Right now, the heavy sentiment among Joe collectors is for the earlier figures. As collectors who were old enough to purchase and remember Joes back in the early '80's start to move on in life, younger people who are nostalgic for figures from the '90's will replace them. When this happens, I think you will see much more done with and written about the figures from 1994. Just remember, though, you heard it here first.

For over a year now, I've been telling people about the cool figures from the '94 line and about how, someday, collectors were going to warm to them and they would start to become even scarcer than they already are. The well of '94 figures is starting to run dry. Only a year ago, you could find lots of carded '94's that would sit unsold for under $3.00 a piece. Star Brigade figs could rarely be sold at any price. Now, though, there is a dearth of '94 Joes out there. Sure, a few more loose figures are available, but the carded ones are starting to disappear. I've always felt that the '94 series of Joes is not only highly underrated, but also very scarce. Few people were into Joe the year the line was cancelled. As such, production numbers are much lower. People are starting to realize this. As floods of '80's, and even '90 and '91, Joes continue to find their way to market, the '94's are not following suit. Savvy collectors are filling the holes in their collections and the '94's are finally starting to get their due. Right now, carded '94's are still affordable. I would take advantage of this now, though, because I don't see it lasting for long. '94's will be the next big area of Joe price jumps. They are still very forgotten right now, but will become a hotbed of Joe activity. I was one of the few who bought these guys back when they were at retail. Right now, their secondary market prices are very comparable to their original retail price. You can be sure this is an inequity that won't long go uncorrected.

By the way, you might notice the sweet gun that this guy is holding in the picture down below. I want to give a big shout out to Raven Viper for it. It is a custom and is excellent. He does good work and I highly recommend him to anyone.

I still need a couple of loose '94's. Most notably, an Alley Viper, Predacon, and Lobotomaxx. If you can help, email me. 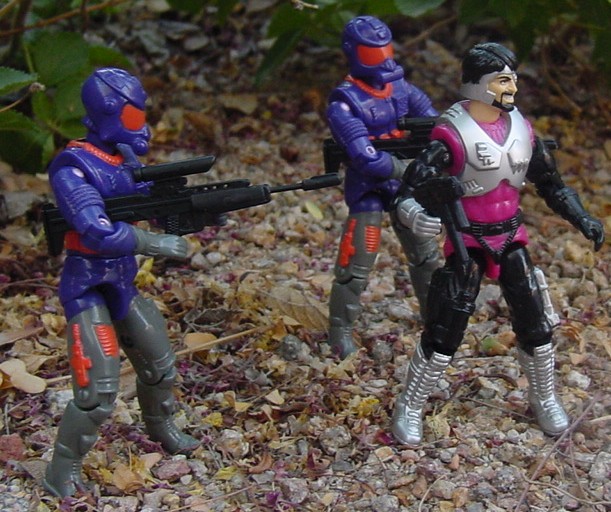 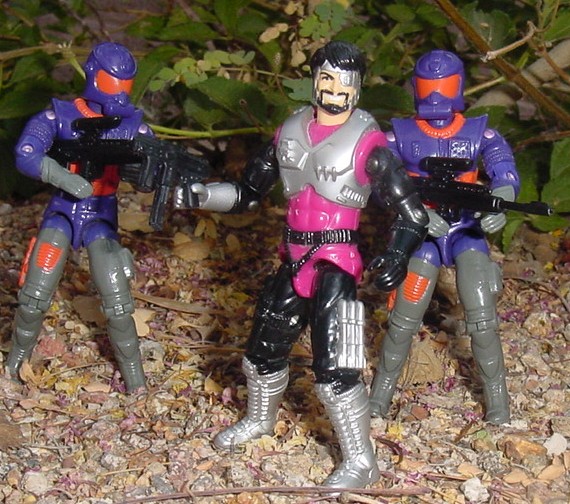 Posted by Robot_Sonic at 12:00 AM
Email ThisBlogThis!Share to TwitterShare to FacebookShare to Pinterest
Labels: 1994, Battle Corps, Metal Head