I've already profiled the basic blue Cobra trooper when I showcased the Viper Pilot. Since most collectors use Stinger Drivers as just another branch of the Cobra Officers (as that was all their filecard was!), you can see why this guy rarely gets any due. He is a figure for me, though, that has proven important for many years and one that, more recently, has become a larger part of my standard Cobra army.

I've never really liked the Stinger jeep. I liked the original VAMP, but hated the VAMP Mark II. The reason is simple, the doors and roof, while greatly adding to the aesthetics of the vehicle, greatly reduce its play value. On top of that, the Stinger only had a missile launcher. I wanted a jeep with a gun. For me, the missile launchers were mundane and boring. The primary reason the Wolf is so superior to the Snow Cat is simply because of the swivel machine gun it has located on the main body. It makes such a better weapon that I can hardly use the Snow Cat as comparison. That being said, the Stinger Driver quickly found himself in capacities beyond his original intentions.

The Stinger Driver, I think, was designed with the intention of him being a night force version of the Cobra Officer. As such, he was cast in a pale, grey color. This color, though, worked perfectly for all sorts of other specialties. Originally, the Stinger Driver was my Cobra Arctic trooper. When the Snow Serpent was release in 1985, though, he took over the Stinger Driver's functions there. However, at some point during my childhood, I made the connection that the hierarchy in Cobra went Crimson Guard - Eel - Snow Serpent. (I now know different, but had lots of fun as a child following this advancement scheme.) As such, the Snow Serpents were the creme-de-la-creme of the Cobra forces. They could not be stopped. The only way for the Joes to have a chance against any Cobra Arctic forces was for me to reintroduce the Stinger Driver as basic Cobra Arctic troops. I originally gave them white AK-47's from an accessory kit and had them serve under the tutelage of a more experienced Snow Serpent. Slowly, though, their usage slightly morphed. Then, for years, he was the gunner for the aforementioned Wolf. In the Arctic realm, this guy was an excellent crossover figure. It was in this capacity that the Stinger Driver stayed until just recently.

The past year has seen me greatly grow my Cobra armor ranks. I've doubled the amount of Hiss tanks in as well as added a couple of new Stingers to my collection. As these vehicles have been assimilated, I've had to search out proper drivers for them. As I've said many times, I like uniformity in my vehicle driver ranks. I have the Motor Viper drive all my Hiss tanks (I still don't like the original Hiss Driver.), the Ice Viper man all positions in my Wolves, and I finally decided to have Stinger Drivers operate all my Stingers and Rattler 4-WD jeeps. While I wish I could have found some other figure for this duty, none fit into the jeep in the same manner as its intended driver. Now, though, the jeeps and drivers are rightfully reunited. I must admit, that I now enjoy having these figures in the jeeps. They do look nice and add a nice touch to any diorama with a Cobra mechanized unit.

1984 was an odd year in terms of vehicle drivers. Both the Stinger and VAMP Mark II featured exclusive drivers who were nothing more than repaints of previously released figures. These were in stark contrast to the multitude of exclusive drivers from 1984 who were all new molds. It seems that the Stinger and VAMP might have been vehicles that were mostly profit for Hasbro. They featured the modified body of a vehicle that sold very well in the first two years of the line and figures whose molds were likely already paid for as well. Perhaps it was the inclusion of these vehicles in the line that allowed Hasbro to take a chance on a larger item like the Whale or Rattler since they knew they would make money on these jeeps.

Stinger Drivers aren't too tough to find these days. They were offered in a very popular and cheaply priced vehicle during Joe's peak years. Also, he was offered as a mail in figure for many more. Therefore, he exists in abundant quantities today. However, this figure is prone to discoloration. There are many Stinger Drivers out there that may otherwise be perfect, but they suffer from severe discoloration that rivals even the worst Storm Shadows and Snow Jobs. Also, Stinger Drivers are subject to a rather strange phenomenon. It seems that their hands are prone to breaking off. Now, I'm not talking about a broken thumb, or broken figures.
I'm talking about the hand just coming clean off at the wrist. I've got one that had this happen to him and many other collectors report the same thing. It doesn't seem to be a problem with most other figures, but the Stinger Driver is just prone to this kind of breakage. Taking all that into consideration, though, still leaves you with a cheap figure. He didn't have any accessories to lose, and most people consider him to be a lesser version of the highly sought Cobra Officer. Still, though, he is a Cobra trooper and many people like to have more than a couple of Stinger jeeps. All said, though, you can pick up a mint specimen for under $12.00. I don't think it too bad a price for this figure. He is definitely a nice addition to any Cobra army and is a figure well worth another look.

I'll take a couple of extra Stinger Drivers. If you want to get rid of them cheap, email me. 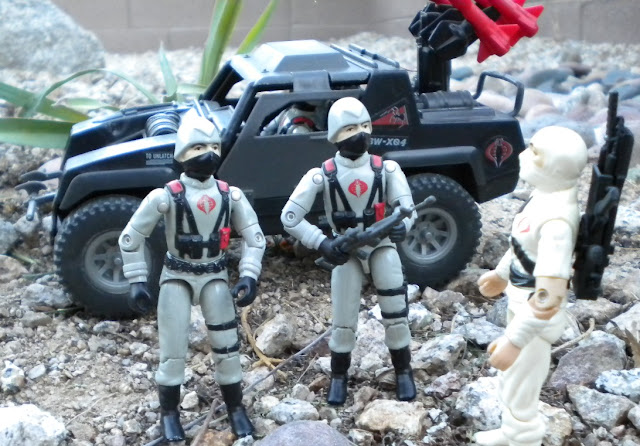 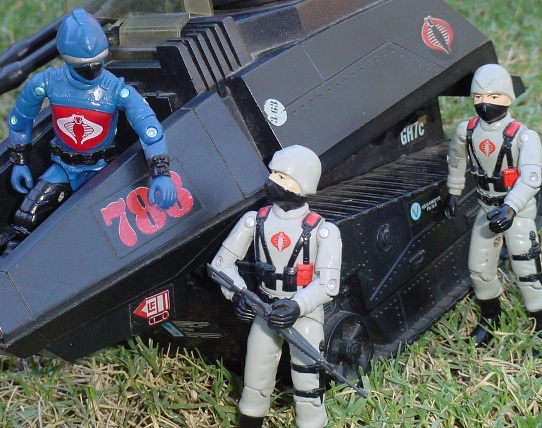 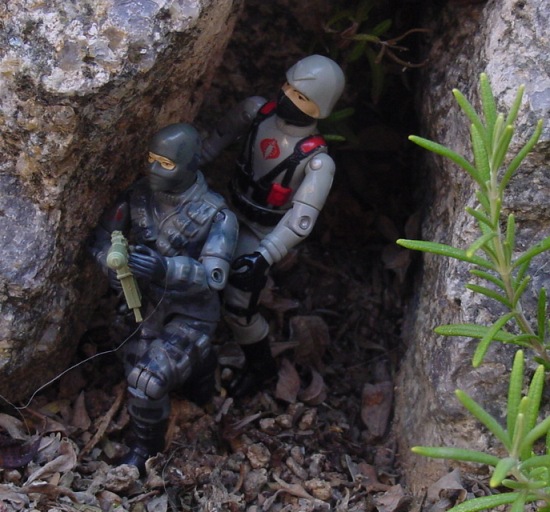 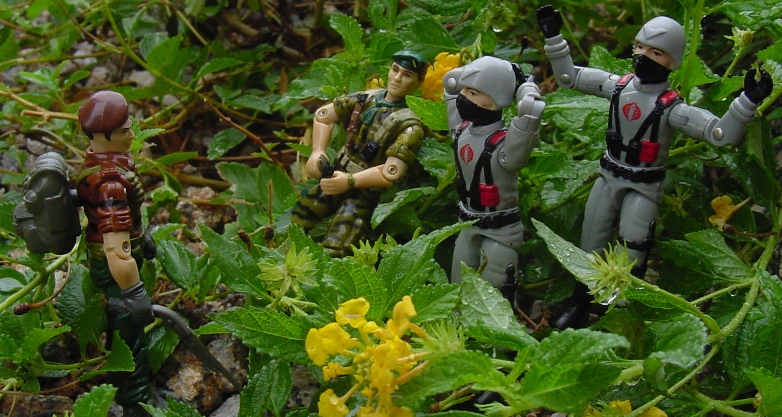 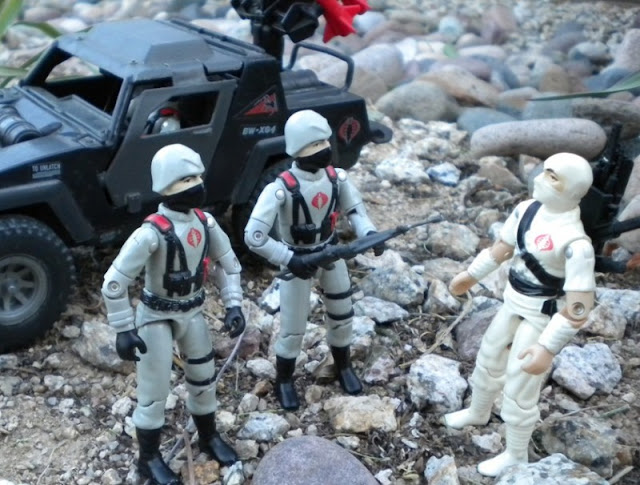 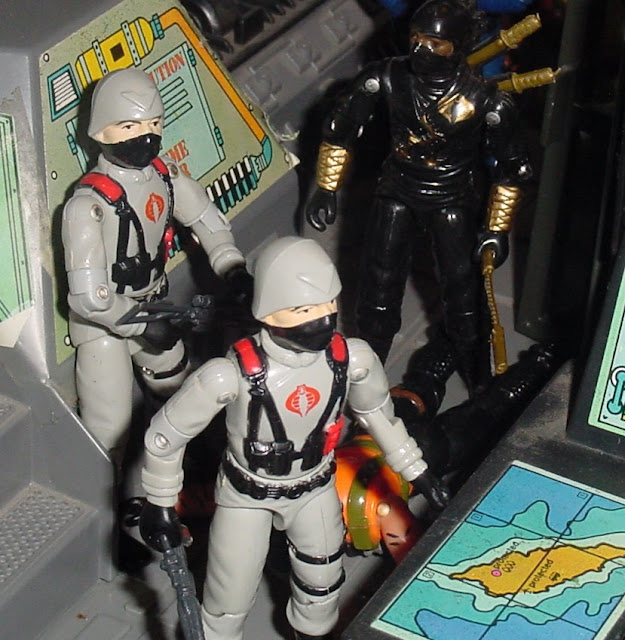 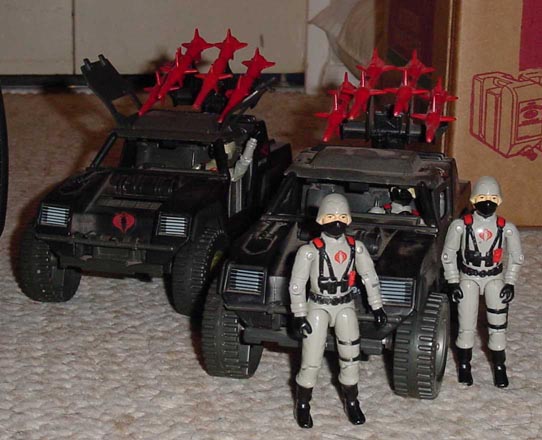