Much has been recently made of YoJoe.com offering Funskool Joes from India to the collecting community. This is the first time that foreign Joes have ever been made widely available for affordable prices here. While some may deride the playability of many of these bizarrely colored figures, there are a few figures in the assortment that really stand out and can find a home in any loose figure collection. While the Night Viper, Cutter, Stormshadow, and the Hydro Viper are the most noteworthy, it is the largely unheralded Desert Scorpion figure whom I have chosen as my representative for profiling.

When I first saw this guy, I quickly bought three of them. I didn't really know what I was going to use him for, but the color scheme and cool mold simply drew me to the figure. After I ordered them, I kept looking at the picture of the figure and tried to figure out what I was going to do with him. Suddenly, it hit me. This guy was going to be Cobra Commander's personal body guards. While I have previously used Crimson Guards in this capacity, I felt this figure would be a perfect way for my Commander to have distinct body guards that would draw attention to themselves in any diorama I may set up. Also, their odd color scheme could be attributed to the fact that they are not combat troops, but ceremonial guards. The Commander is not a combatant anymore and rarely leaves the confines of his bases. In this setting, having guards dressed like the Desert Scorpion would make perfect sense. Also, the figure's massive Road Pige-sque arms make him look like the type of person who would be a personal body guard rather than a normal combat troop. Add to that the cool, little pistol these guys come with, and you've got a perfect figure to use in this capacity.

I think the reason I like these guys is twofold. They are a great mold that comes with cool accessories that is tough to find in the U.S. They are also in a color scheme that is eye-catching, but still distinctive enough that you know the figure is something a little different. Like Skydiver and the Tiger Force Outback, this figure is done in a style that is very different from American Joes, but is still not so gaudy that the figure can't be used among them. I foresee these guys getting a good deal of use in my collection. I've said that I don't have much use for desert figures, but this color scheme, and the lack of the cloth headpiece, allow this figure the versatility I look for in figures that I use frequently. As the Commander becomes the focal point of many dioramas, I see these guys always being by his side. It was a role that had belonged to the Crimson Guard Immortals, but they have moved on to bigger and better duties. This figure will provide my Cobra Commander with the security he needs without me having to sacrifice other, more traditional Cobra troops for his defense.

The overall availability of this figure is not yet determined. The first shipment that YoJoe.com received sold out in a matter of hours. I would expect that trend to continue through several shipments. This is the type of figure that people will snatch up and use to build armies. Like the Funskool Night Viper, the Desert Scorpion is a cool and less often seen Cobra mold. While this guy's colors aren't as close to the traditional American figure's as the Night Viper is, they do actually work and create a very aesthetically pleasing figure.
Personally, I've got two of these guys loose right now. I only ordered a couple of them so that other collectors would have a chance at getting some of these guys. I am fully anticipating adding a couple more every time I get the opportunity. Slowly, I will be able to build up a nice cadre of these guys and they will be able to guard every version of my Commander. You can be sure I'm not the only one who is planning on doing something like this. If you see these guys available, I would buy a couple right now. I've found the quality of the figure itself to be superior to many of the '97 releases. (Although, the unconfirmed rumours of lead based paint in these figures will prevent me from even allowing any children to handle them.) This rare opportunity that has been afforded the collecting community by the guys at YoJoe.com should be fully embraced and utilized while it is available. While many would like to think deals like this will be around forever, you never know what the future holds. (Just look at the current state of availability for the peg warming 1997 Joes!) In any regard, I'm very happy that I've had the chance to acquire figures like this Desert Scorpion. Given half a chance, I think your collection will welcome him as well. 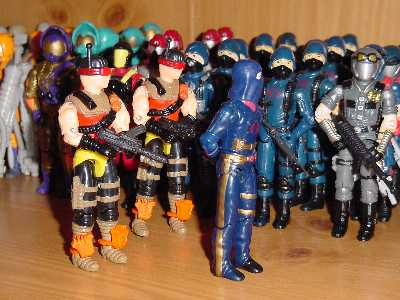 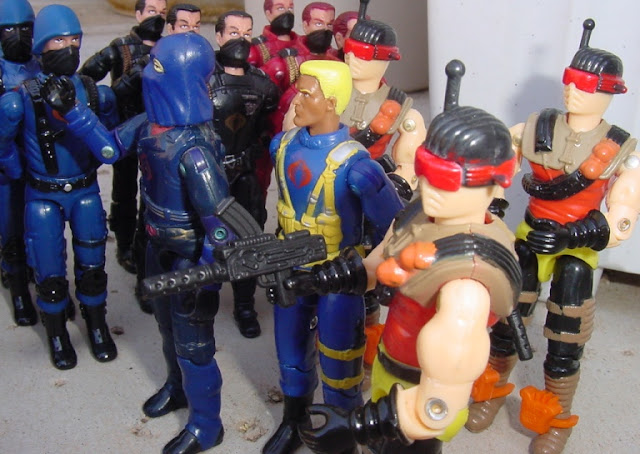 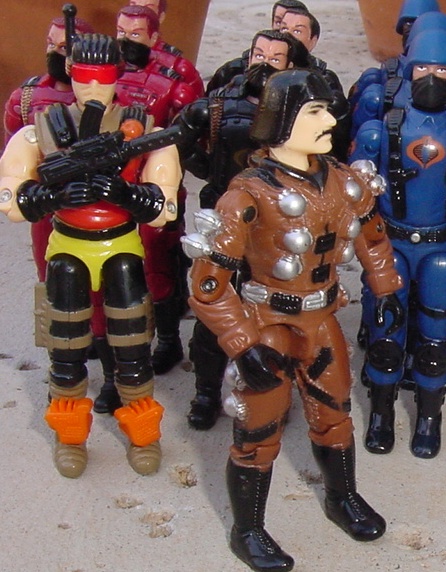 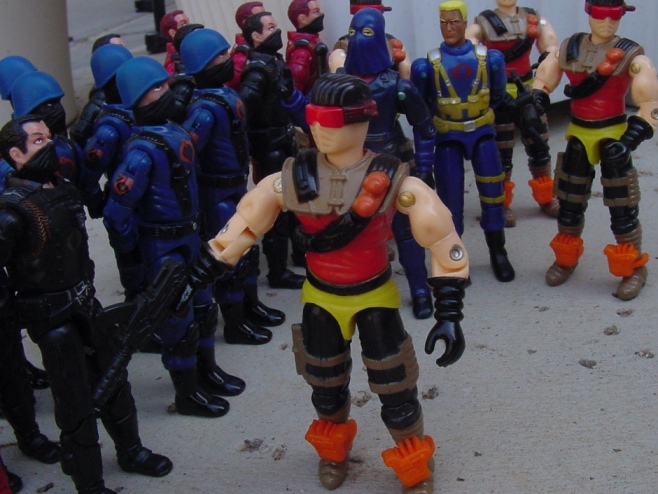