Back in 1984, I spent several weeks of the summer in Chillicothe, Ohio. This was a small town with nothing in it to do. I had taken a small contingent of Joes with me, but they had grown old after a couple of weeks. My mother finally took me to a K Mart around the middle of our stay. They only had 2 figures for sale: an opened Ripcord who was missing all his gear and Recondo, the Joes' new jungle trooper. Since Ripcord was opened, I picked up the Recondo and went on my way. By the time we drove back to my aunt's house where we were staying, I had already conjured up dozens of adventures for my new favorite figure.

I'm not sure where I got this particular version of Recondo. He appeared in my collection back in the late '80's before I ever thought of buying second hand Joes. He only came with the Tiger Fly, a repainted Dragonfly helicopter, and I never had one of those. None of my brothers know where he came from either. It's just one of those weird things. I'm sure some kid out there lost this guy the day after he got him and never found him again. That figure probably went through the same warp that my original Cover Girl and Nien Numb (Star Wars) figures went into never to be seen by me again. It just all evens out over the years. At any rate, though, this guy is a nice figure that I liked to use. '88 was near the end of my Joe buying days. I had only purchased a Tiger Force Roadblock, Hardball, and Hit and Run figures that year. Getting this guy was a nice bonus since my collection had so few new additions that year.

I had always liked my Recondo figure. He had a great initial run in the comic that kept my interest in him very high. However, my original one had broken and his replacement was pretty worn. Because of that, the figure had fallen out of favor with me. Once I had this guy, though, I was able to reintroduce Recondo to my Joe fold. For a very short time he was one of the figures I used most. However, I've already talked about how '88 was near the end of the road for my original Joe collection. In late '88 or early '89, I boxed up all my Joe figures and put them into a closet. I decided that I was too old to be playing with the figures, but I wanted to keep all of them since I feared my younger brothers would ruin the figures if they could get ahold of them. Recondo went into that box and stayed there until early 2000. Then, I finally consolidated my entire collection from my parents' house and the one I built in Arizona. When I did so, Recondo was reunited with his Tiger Force brethren, but quickly disappeared into the 1988 drawer and has just recently emerged. I don't know if he will remain a vital part of my collection. His swivel head construction puts him far behind many other, newer figures that I would like to use. When I need a jungle trooper, though, I will look to this version of Recondo far before I do the original.

Of all the subsets ever offered in the Joe run, Tiger Force is the most confusing. There are several reasons. Originally, Wild Bill was to be the pilot of the Tiger Fly. For whatever reason, though, that didn't happen and we got Recondo instead. Also, Ripcord was supposed to be a Tiger Force member. In fact, in the comic issue where they showcased Tiger Force, Ripcord was part of the story line. The most intriguing member of Tiger Force, though, was a character named Sabretooth. Basically, Sabretooth was a recolored 1984 Firefly who was a Joe. Not much more is known about him. For reasons that are now surely lost, Wild Bill, Ripcord and Sabretooth were pulled from the Tiger Force team and replaced with Tripwire, Bazooka, and Flint. On top of this, the set wasn't produced in the same numbers as other toys from that year. As such the figures, but especially the vehicles, are kind of tough to find. The fact that the Tiger Force idea was a very popular, though, doesn't help matters. Six exclusive Tiger Force figures were released only in Europe. China got a very cool remake of the Tiger Force Flint. In Brazil, Shipwreck and Airtight got exclusive Tiger Force figures while Dusty got a slightly different remake. And, finally, in India, the Lifeline figure reuses the Tiger Force card art and the figure is obviously inspired by the Tiger Force color scheme. All of this will surely keep any Tiger Force aficionado very busy trying to track down all the different figures and making customs of those who were not to be.

Apparently, the Tiger Force Recondo is a tough figure to find. He was only available with the Tiger Fly, so it now seems that not many people had him. Mint and complete, I've seen this guy fetch $25 on the second hand market. Usually, though, he is much more reasonably priced. His accessories, though, are a bear to find. While loose figures are seldom seen, complete loose figures are even more so. Don't even try to find him complete with his filecard. You're better off just buying a MIB Tiger Fly. It will save your sanity. Overall, though, I prefer this version of Recondo. The original is bland, while this guy has the aesthetic appeal that makes me want to use him. While Recondo no longer receives the attention he once did, this figure is growing on me. He is a forgotten character who has an even more obscure variation. Perhaps, now he will get some more due. 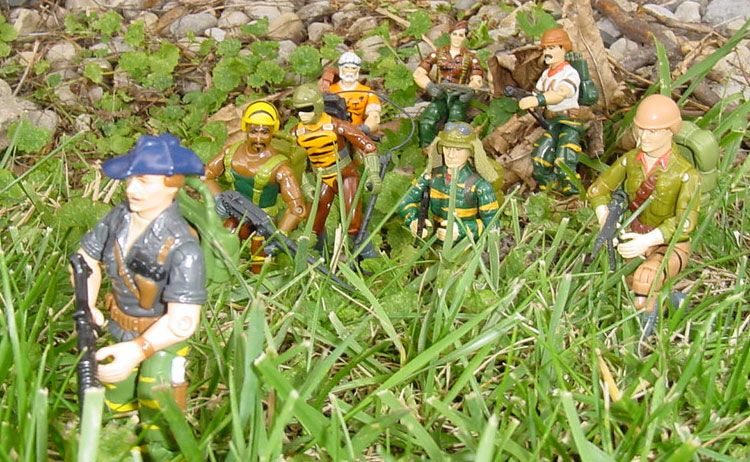 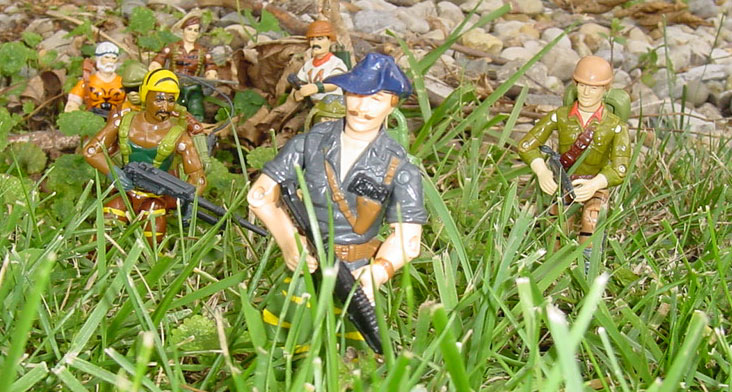