Back in 1994, I had a summer job at a small real estate company. Basically, I answered phones and just sat there in case anyone ever came in. Naturally, this lead to periods of incredible boredom. In order to pass the time, I would write stories that would keep me from falling asleep. In the main waiting room of the office, there was a floor to ceiling map of the Americas. One day, while walking around to keep myself awake, I started to stare at this map. Most notably, South America stood out. For most of my Joe stories, the U.S., Canada, Europe, and Russia were the focal locations. In fact, my Joes almost never left these theatres. I started thinking that Cobra would eventually grow tired of Joe's presence in these areas and move on. What better place for them to go than South America?

However, I had a problem. This new foray into new territory could not be done by the existing Cobra hierarchy. Cobra Commander was starting to age. Plus, he was tied up fighting off the charges of the character portrayed by Sea Slug. I needed a new breed of Cobras who were going to be the new leaders of the organization. After looking at the map, I sat down with 5 index cards and sketched out the groundwork for 5 new, dynamic Cobra leaders. The first was an old naval officer who was the mentor of the group. Immediately, I knew that he was going to have to die. In fact, the first story I came up with that involved these new characters was this particular character's death. The next was a ruthless fast attack commander who was portrayed by the 1993 Firefly figure. Another figure was a spineless worm who sucked up to both the Commander and the Sea Slug character. The next was another young, tactical genius. He would come to be portrayed by the 1994 Metal Head figure. The final character, though, was the most difficult. He was the mastermind behind the whole operation. He had yet to declare an allegiance, though he is mentored by Destro. He is a powerful leader whose motives are known only to himself. He has fierce loyalties to his friends, and to Cobra, but he has his own vision of what Cobra should be. The character has become the focal point of all my Cobra operations since that summer.

However, I could not find a figure that would adequately represent this character. All other named Cobras are too well identified with their real personalities to take them away. The few that aren't like that were already chosen for new roles. There was not a single figure I could find that fit my vision of this new leader. Then, a couple of months ago, a prominent Joe collector made an offhand remark about a Brazilian exclusive figure that was a unique repaint of Cesspool in the Commandos Em Acao line. I looked up the figure on YoJoe.com and was amazed. I now had a figure who I could use for my new Cobra leader. It was only fitting that the head of the Cobra South American operation would be a figure that was only released in Brazil. I immediately began a six month search for the figure who finally could represent the most important Cobra character in my collection: the Escopiao Voador or the Cobra Flying Scorpion.

This figure represents what I think foreign Joes should be. Like my other previous foreign exclusive Joe profiles, the Escorpiao Voador shows a uniqueness and originality that would make you think the figure an American release as part of the regular line. His combination of parts: Scoop, Cesspool, and Recoil are a nice mix. His colors are subtle, though some might consider them bizarre. It is his head, though, that makes this guy a totally new character. The original Cesspool is a Caucasian character. To recolor his head in black to create a new figure makes him the only foreign figure to ever change race in this direction. (Stalker, Iceberg, and Bullet Proof were all released as Caucasians in various parts of the world over the years.) It also creates such a difference that most people would not be able to tell the figures were from the same mold were Cesspool and Escorpiao Voador seen standing next to each other.

With this figure, the final piece of my Joe collection is complete. I've been using the new characters for several years, now. Not having a figure to represent the new Cobra South American leader was frustrating, but also fostered some originality and creativity. I had to come up with reasons why this person was not present at the battles. I didn't want him to be a wimpy commander who had no trouble sending soldiers off to die in situations he would never approach himself. Instead, I was able to work around it by having his underling generals be too cautious and not letting him near combat. That way, he yearned for it in a way that would inspire and earn respect from the troops while not needlessly exposing himself to danger. A couple of weeks ago, though, I decided that it was time for some things to come to a head. Knowing this figure was coming helped push along my Joe world to a point where this guy could no longer stay out of the front. In the coming weeks and months, I see this figure being the pre-eminent Cobra figure in my collection as this new leader starts to make himself known to his own forces and the Joes. Naturally, it will be quite fun.

When I was taking the pictures you see below, something really struck me. The way I have my Cobra hierarchy run is heavily determined by different phases of my collecting life. Cobra Commander allied himself with Scrap Iron, Major Bludd, Firefly, and Zartan. All of these figures were from my earliest childhood and I would have had all of them at the same time. The next faction, led by the Sea Slug character, contains Dr. Mindbender, the Crimson Twins, and the high ranking Cobra soldier portrayed by the Worm figure. All of these guys came out in the second phase of my childhood and it makes sense that they are grouped together. The newest group of Cobra leaders that is headed by the Escorpiao Voador is made of figures I acquired during my adult collecting life. The final wild card is Destro. He has always kept in close touch with the Commander but has never been his public ally. With the new batch of leaders coming up, Destro, represented by the 2001 version of the figure, signifies the new direction in which Joe is going. Each phase represents a unique schism that coincides with my different phases of collecting. I had just never noticed it until I saw the photos.

One of collector's hang ups about foreign figures is the quality. We all know of the inferior quality the Funskool figures have to their American counterparts. Brazilian figures, though, are very similar to American examples. They have very nice paint masking that isn't sloppy. The figures themselves are of comparable quality to American figures, though they are slightly more brittle. You can feel it when you handle one. The plastic has a feel and a sound about it that lets you know it wouldn't stand up to the rigors that an American figure would, but it still feels sturdy enough to survive the toughest test a collector would ever subject a figure to. Just a note, Brazil produced several Joe figures for the American market. Slaughters Marauders, the Arctic Commando Dee Jay mail in, Rampage and many other mail in figures were all produced in Brazil. That helps explain why these figures tend to have broken crotches and thumbs at a greater frequency than other American figures, but we've all handled figures like these and know their limitations and capabilities. I have no qualms about using my Brazilian figures alongside those from Funskool, Palitoy, Plastirama and Hasbro. I don't think you will either.

Escopiao Voador was released as part of the Sky Patrol (Patrulha du Ar) subset in Brazil. The set includes 3 other exclusive repaints that are also kind of cool. None of them, though, is as drastically different as this guy. While these guys are hardly common in the U.S., they can be had fairly easily if you are willing to do a little legwork. They are not as easy to find as the Brazilian exclusive Eco Warriors figures, but they still appear, often carded, on the American second hand market. Like most of the later Brazilian figures, these guys can be had for under $40 for a MOC specimen. Considering many American collectors are now willing to spend almost that much for a mint, complete Crimson Guard figure that exists in much greater quantities, that's not too bad a price. Like most of these later foreign figures, though, I expect the ease of finding these guys to only increase. The world is getting smaller and many more people from South American, Asia, and Europe are now involved in online Joe collecting circles. Slowly, figures like this guy will filter in and become more available with each passing year. As I've finished with my American collection, only foreign Joes really attract my serious interest. Many other collectors are starting to report the same thing. With that in mind, the increased supply could still be outstripped by increased demand. And we all know that that means. 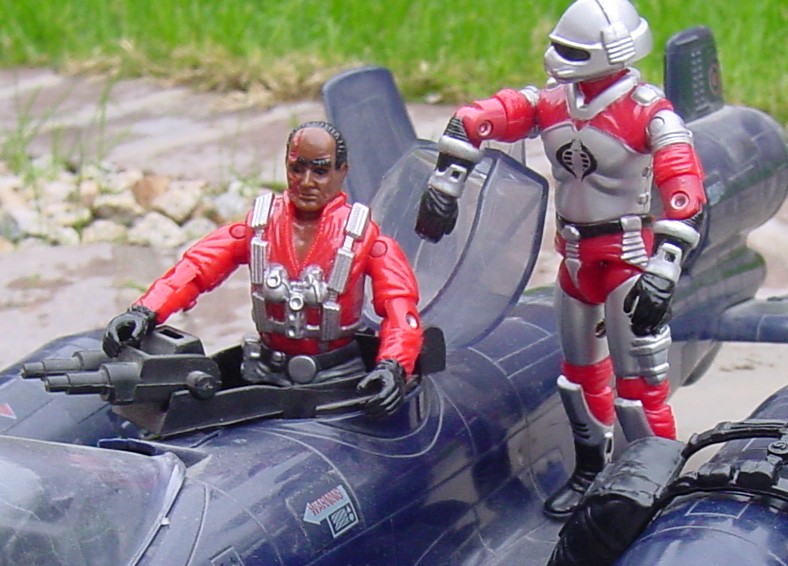 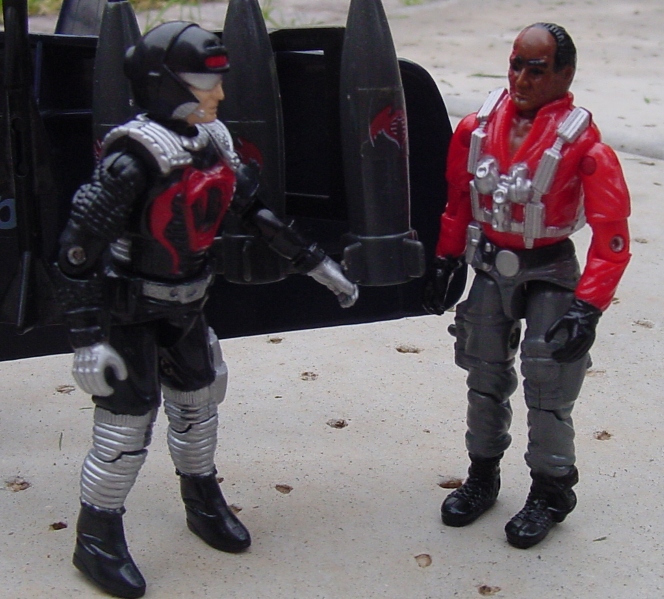 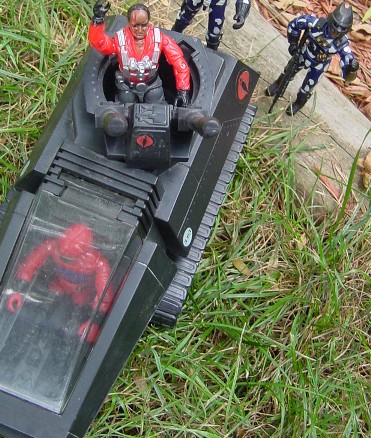 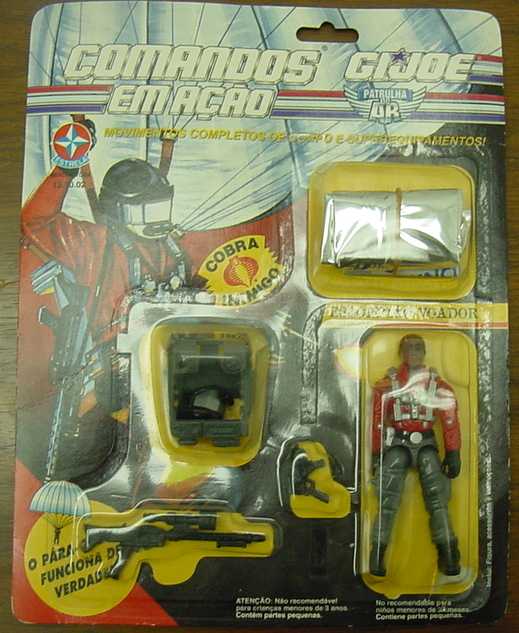