It's been a long, long time since I've profiled a Dreadnok. With the new Zartan figure due in the next 4 to 6 weeks, though, I felt this would be a perfect opportunity to revisit one of the more popular, and the original G.I. Joe subset. However, which Dreadnok to profile was a problem. While the original 3: Torch, Ripper, and Buzzer are great, once I've profiled one, I've really explored them all. Monkeywrench and Thrasher really aren't options since they were pale comparisons to the original three figures. A case could be made for Zanzibar and I've already made my feelings about Road Pig known. That has only left the final, and most obscure Dreadnok for me to profile: Gnawgahyde.

As a character, Gnawgahyde leaves much to be desired. In fact, I can't think of a single appearance he made in any mainstream Joe medium. Because of that, he is very overlooked. Road Pig became a huge star in the comic. (Larry Hama said he was very fond of the character.) Gnawgahyde, though, fell by the wayside. By the time he came out in 1989, most of the kids who had Zartan, and even the original 3 Dreadnoks, were getting out of the hobby. The newer blood had no idea what these Dreadnoks were supposed to be. As this guy got no real characterization, he fell behind the awesome class of 1989 Cobras and became another of the line's afterthoughts. He is just another figure that no one really pay attention to and remains of the many forgotten named Cobras that was released after 1987.

As a figure, Gnawgahyde is fantastic. He has a look about him that is very pleasing to the eye. He also comes with tons of great accessories. His weapons perfectly fit his specialty as a poacher. He has the Aussie poacher hat, a huge sniper rifle complete with a scope and a nice bipod (often missing!), a bow, a quiver, a clip on machete, a mean looking warthog that even has its ear pierced, and a knife that fits into a sheath on his boot. This feature alone makes the figure worth owning. Add to this his face. The figure has a cartoonish look that makes him appear as a caricature of himself. Making him that over the top, though, fits with the type of figure that I've always envisioned this guy as. He is larger than life and would have the appearance to back up his personality. The sculpt of the figure itself is inspiring. It showed the level of detail that was the hallmark of Joe's golden years. It also shows, though, that many of these later figures are on equal footing with earlier figures. Collector bias is all that keeps them from the respect they deserve.

For me, though, Gnawgahyde has never been an integral part of my collection. He is a figure of whom I acquired many multiples in my days of Cobra army building, he is often included with lots of figures from '89 and '90, but never really used. I've said before that my days of using Dreadnoks are over. However, this guy did see some time as a prisoner and smuggler who served as a foil to my law enforcement figures. Lately, though, this figure has captured my attention. I'm not really sure why. Perhaps is the striking color scheme. It could also be Gnawgahyde's accessories. Whatever the reason, this guy has recently found himself sitting out of one of the 2 '89 Cobra drawers. (I keep all my figures in drawers separated by year. Years where I have lots of figures are then further broken down into Joe and Cobra drawers. Right now, '89 is the only year of which I have 2 Cobra drawers. That's how many '89 Cobras I've got.) I don't know if my focus on this figure will be long lived, but right now he is the only Dreadnok that isn't tucked away in storage. Time, of course, will be the ultimate determiner of whether or not this guy remains at the forefront of my collection. For now, though, Gnawgahyde is enjoying the ride.

Gnawgahyde's aren't hard to find. He will, though, cost you substantially more for a complete specimen than for one with even most of his accessories. Being an '89, though, means this guy is available. You can usually get them carded for under $20. This guy isn't nearly as popular as the other, earlier Dreadnoks. With that in mind, you can pick these guys up either by themselves, or in casual lots. Over the years, I've had nearly half a dozen Gnawgahydes. Lots of people had him and lots of people have him still. Regardless of how you acquire him, Gnawgahyde is a decent figure to add to your collection without dropping tons of money. With the resurgence of interest in Zartan and the Dreadnoks, though, figures like Gnawgahyde may even become more difficult and more expensive to find.

I've got all the American Dreadnoks that I want. However, I am after a purple shirted Ripper and a red shirted Buzzer from India. If you have either of those available ,email me. 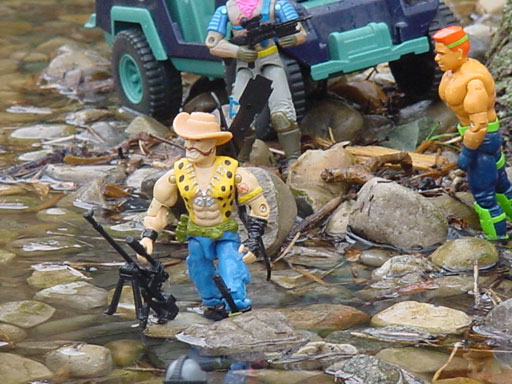 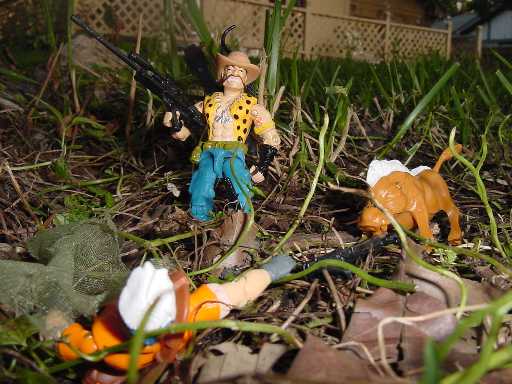 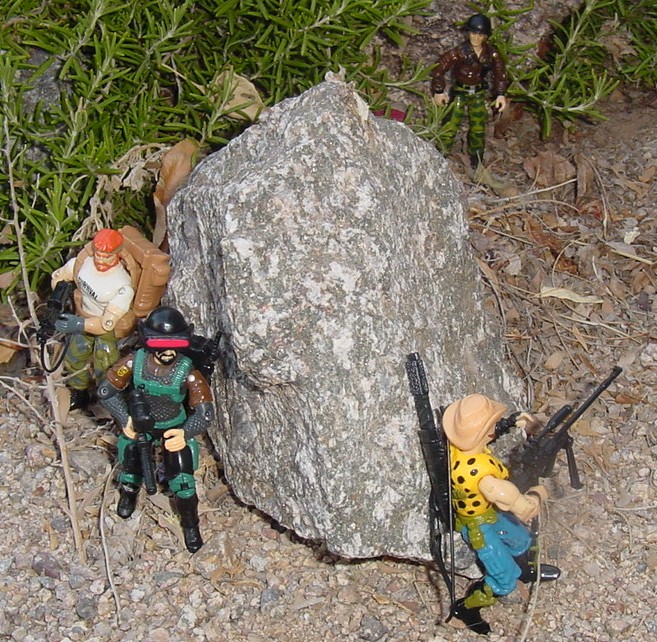 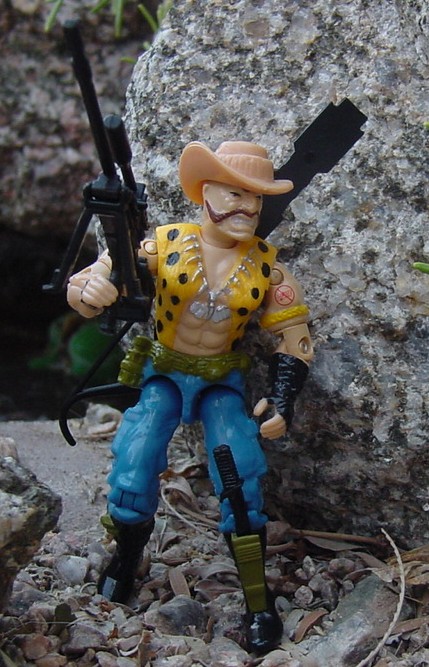 Posted by Robot_Sonic at 12:30 PM
Email ThisBlogThis!Share to TwitterShare to FacebookShare to Pinterest
Labels: 1989, Dreadnok, Gnawgahyde