Back in the late '80's and early '90's, I was out of Joe. I hadn't bought a figure in some time. My youngest brother had picked up one or two random figures, but, for the most part, there were no new Joes in our house. Then, one day, I saw an interesting figure sitting on the floor of our computer room. It was gray and red and was unlike any figure I thought we had. I asked my brothers where the figure came from, but neither of them knew anything about it. They hadn't received any new G.I. Joe toys in a while. Like the Tiger Force Recondo no one knew where this figure came from. Since I thought he was really cool, though, I packed him away with my other figures and forgot about him. A couple of years later, I pulled out the figure, but still didn't know who he was. Once I discovered YoJoe.com, though, I finally learned that the mystery figure was actually the driver of the Hiss II, the Track Viper.

I never had a Hiss II. In fact, to this day, I've never seen one first hand. For some reason, it is a vehicle that has eluded me. However, the driver of the Hiss II is a great figure. I hate the original Hiss Driver. The red color, lame head and ridiculous leggings make for a guy that hasn't seen the light of day in quite some time. For a while, I used Motor Vipers as my exclusive Hiss drivers. The bright blue, though, started to wear on me. I had used my lone Track Viper as the driver for the Maggot, I use Worms as a named Cobra, but hadn't liked his soft grey against the blue grey of the of the Maggot. On a whim, I decided to put the Track Viper in the original Hiss tank. This was a winning combination. The figure fits into the cockpit perfectly and the grey and red is a better blend than the stark contrast created by the original driver. The Track Viper is a perfect example of how a later figure can integrate with an earlier vehicle and make it better.

Most people pay little attention to the Track Viper. He is an obscure figure for what an important vehicle he came with. For whatever reason, mainly the fact that he came out in 1989, collectors have passed him over. Of course, what do you do with a figure like this? I, myself, called him "uninspiring" back in the early days of this site. I still say that he has no flash and isn't a figure that everyone would see and just have to have. He is, though, an example of another nice, quiet addition to the Cobra ranks. Most collectors still rank 1989 as the second best Cobra year ever. Because of the great Night, Alley, and Heat Viper figures, other quality figures, like this guy, have fallen by the wayside. Had this guy come out in 1988, he would be much more appreciated. That, though, is a nice feature. It allows you to use the Track Viper for various purposes that help flesh out a diorama or scene much better than some other better known figure. I've always thought it neat when people use less heralded figures in their collections. It helps keep everyone's unique ideas from running together.

The Track Viper is a great mold. Unfortunately, both of its incarnations are less than stellar. I was really hoping that the Rip It figure would have been a Track Viper repaint. I hate the original Hiss Driver mold. This guy, done in the colors of Rip It, would have been just awesome. Alas, the nostalgic sentiment was too strong and the original Hiss mold was released with the original Hiss Driver mold. It is really a shame that this guy never got another chance to see release in colors that would have showcased how cool he really is. I think that figures like the Track Viper are really worth another look. Most collectors pay little attention to them and gloss them over. Had more collectors been vocal in their support of this mold, we might have seen it rereleased. As such, this guy is still a nice little secret that you can enjoy.

Track Vipers aren't the easiest to find guys in the world. In fact, they can be downright troublesome. With all the lots of '89 Cobras I've bought over the years, I've only picked up one extra Track Viper. Aero Vipers and Secto Vipers are actually a bit easier to find that this guy is. Lately, he will cost you as well. I remember Track Vipers being cheap, but not all that common. Now, this guy can fetch $20 for a loose, complete specimen! That's a pretty high price tag for a figure like this. He may not be out there in great quantities, but he can be found and certainly exists in greater numbers than a number of cooler, and less produced Cobra drivers. With the release of the Hiss III, I think interest in this guy increased. That exposure lead to higher prices. I see this guy becoming affordable again. He just isn't the type of figure that can sustain a high price tag for a long period of time. Guys like the original Eel have started to come down in price. Collectors will have their fill of this figure and he will one day be affordable. In the meantime, I suggest you check out the Nitro Viper. He is a straight repaint of this figure and works just as well in just about all vehicles.

While these guys are cool, I really don't need any more right now. Who is your favorite Cobra driver? Email me. 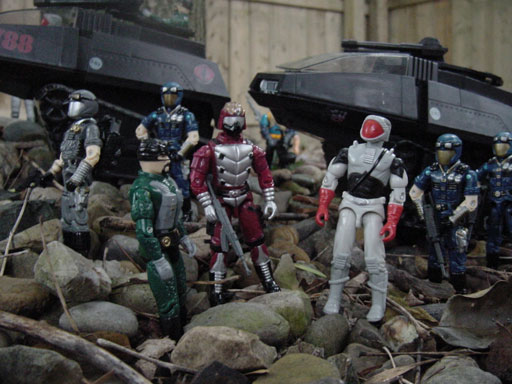 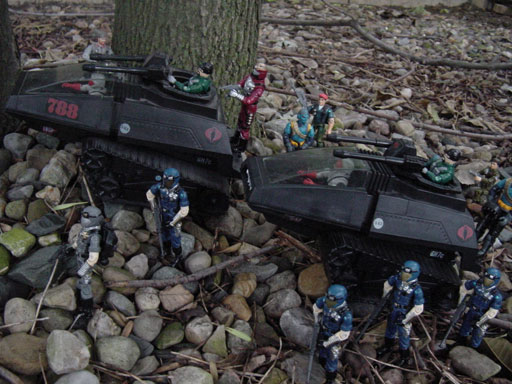 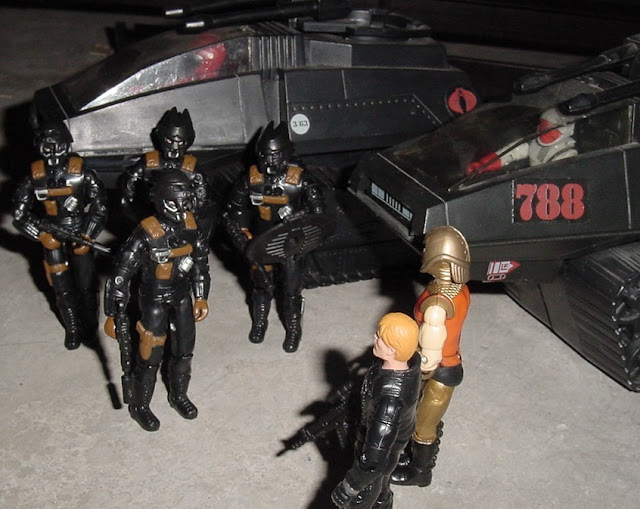 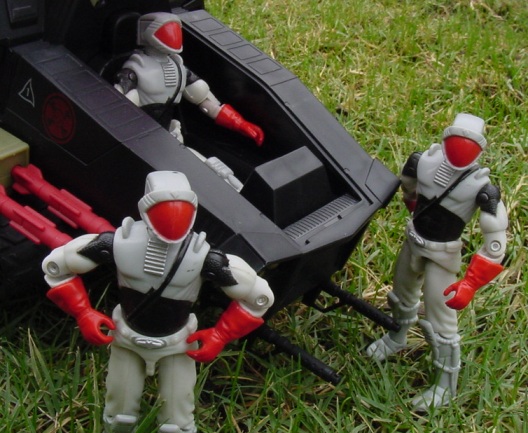