Over the years, I've talked of my beginnings in Joe. I started my collection with the RAM motorcycle and Breaker. I slowly added a couple more figures and vehicles but, in 1983, my interest waned. Return of the Jedi brought me back to the Star Wars fold and I was only interested in those figures. However, during the summer of 1983 it finally happened. Star Wars lost my interest. With the movie tying up the loose ends, I had few adventures left with my figures. They just didn't hold my interest. This, alone, would not have been enough to end my Star Wars days. There was another catalyst that finally swayed me to collect G.I. Joe. In 1983, Hasbro added one simple little articulation twist: swivel arm battle grip. Once this feature was added to Joes, no other figure line could measure up. I remember seeing the first commercial for the new 1983 figures. It showed Airborne, Doc, Snow Job, and this guy: Gung Ho, in an Arctic setting and showing off their new play value. This was enough. When I first held an Airborne figure, my Star Wars days were over. From that day on, I was a G.I. Joe fan.

That brings me to why I chose to profile Gung Ho as my 2 year anniversary figure. It is both hard to believe that it's been that long and amazing that I've had the site going for only that amount of time. Usually, on my anniversaries, I profile a special figure. This one is no exception. There are very few figures in my collection that I have a sentimental attachment to. The original Gung Ho is one of them. You see, I got my first Gung Ho figure for Christmas in 1983. Like most of the figures I acquired back then, he had a hard life. His weapons were lost and his crotch and thumbs broken. This dropped him from my collection and would have relegated him into obscurity. However, in late 1984, I found a new Gung Ho at retail. I had some money and decided to buy him. Rather than allow him to fall into the general release of figures that populated our toy room, I kept special care of that Gung Ho. I liked him a lot and didn't want this version destroyed.

As such, Gung Ho was my figure. I was the only one who could use him. Still, I was young then and the figure did have some hard times. As can be evidenced by the photos below, he is now heavily worn and no where near a mint specimen. For one of the few times in my collecting life, though, I wouldn't have it any other way. With the thousands of figures that have passed through my hands in the past 4 years, you would think another Gung Ho would have been among them. (I have at least 5 of every other figure from 1983. Well, okay, I only have 1 Viper Pilot, but that's understandable.) He is one figure, though, of whom I have never acquired a duplicate. The only one in my collection is the one you see below. I don't know if that is a sign, or just a coincidence, but it makes this particular Gung-Ho an important part of my collection.

What I, and many other fans, loved about Gung-Ho was his characterization. He was big, strong, mean, and very cool. The bayou accent and persona that was evidenced by his filecard and early comic appearance made him stand out. Over the years, few characters were able to rise to Gung-Ho's level. Whether that was a product of poor characterizations or simply bad timing is another issue. What everyone knew was that Gung-Ho was awesome. I remember having schoolyard debates among my friends over which Joe was the strongest. While Roadblock usually won out, Gung-Ho got more than his fair share of lip time among the participants. From his first appearance in G.I. Joe #11 where he wore no shirt in sub-freezing weather, you knew this was going to be a character for the ages. Gung-Ho's undying popularity seems to indicate that it worked. (The figure has had 7 versions in an 18 year span. Few other characters who weren't ninjas got that kind of reinvention.)

Most of you know that I've spent the past several years in Arizona. As such, I have not had a true fall or winter. This year, I've come back to the Midwest for the change in seasons. After cutting my lawn one fall day, I remembered another day, years ago. It was a fall day like this one and I had just finished cutting my parent's lawn. Afterwards, I took my Gung Ho and Vamp outside to play in the freshly cut grass. I remember having so much fun that I relived the same adventure for several more days. Remembering those simpler times reminded me of my old Gung Ho. As my figure is so beat up, I rarely, if ever, use him. I hadn't looked at him in a long time. I then decided that Gung Ho would be my next profile. I then took him, my VAMP, and a couple of Cobra Troopers out in into my freshly cut lawn and wished I could recapture that feeling of so many years ago.

Gung-Ho's aren't tough to find. They aren't even all that expensive. They are, though, very prone to breakage and discoloration. All that means, though, is that people who took good care of their toys will have mint Gung-Ho's. People, like me, who used him to death, will not. Surprisingly, most of the '83 figures are easy to get and relatively cheap. That is a very nice feature for all the people out there who had these guys as kids but spent their days destroying the toy through vigorous play. I certainly have many memories of all my early figures. Many other collectors out there do as well. Despite the means to purchase an updated model, I wouldn't trade the symbol of those memories for the rarest figure in line. If that means that the figure you see here is the only Gung-Ho I will ever own, well, I think that would make me very happy.

I like Gung Ho, but this one has some sentimental value. However, if you have a 1993 Gung Ho with the red vest or a 1997 Gung Ho that you want to trade, email me. 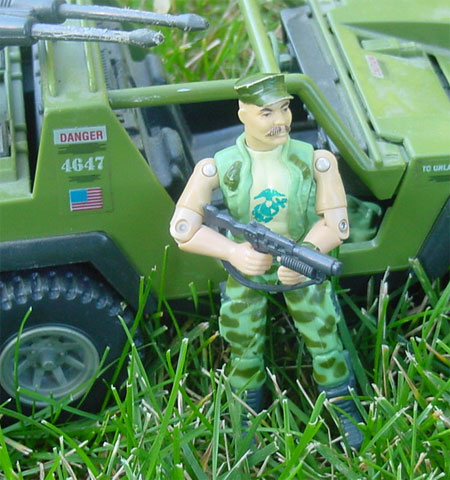 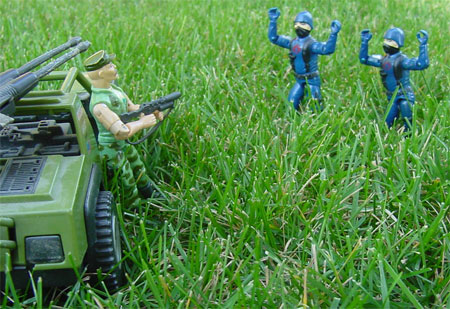 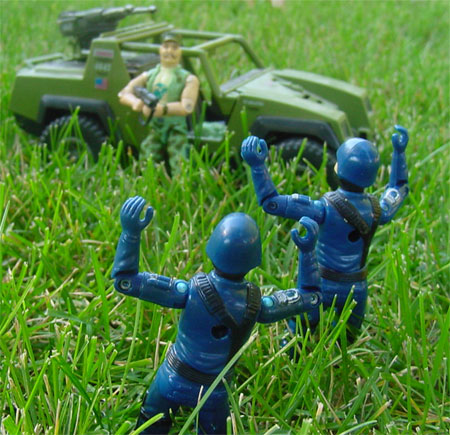 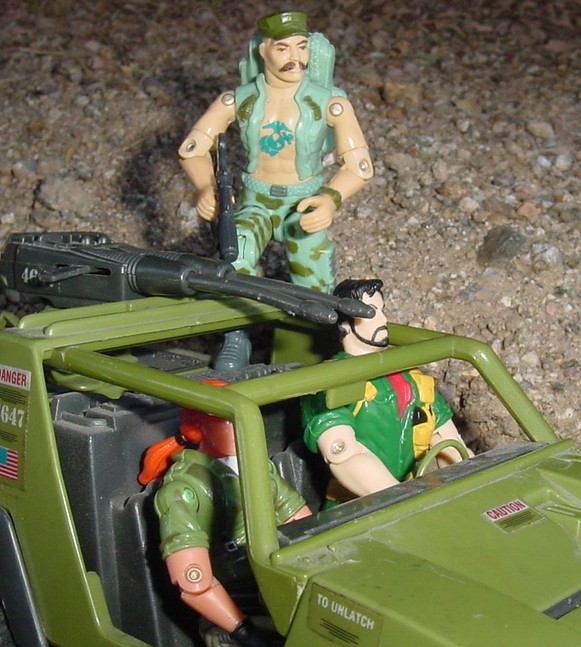 Posted by Robot_Sonic at 4:48 PM
Email ThisBlogThis!Share to TwitterShare to FacebookShare to Pinterest
Labels: 1983, Gung Ho