Maybe it's the fact that 48 of the past 49 days have had snow on the ground. Or, it could be that I was recently waxing nostalgic for the old days. Or, it could be the recently re-released version of this vehicle that is a Toys R Us Exclusive. Whatever the reason, I've been wanting to pull out my old Snow Cat.

The Snow Cat was the second Joe arctic vehicle to be released. Unlike the Polar Battle Bear, though, the Snow Cat was designed to be a major arctic force. The toy itself fell into the mid-range Joe vehicles at the time when those showcased far more detail and playability than their price point would at first indicate. As such, this toy is full of the type features that have made it a fan favorite. The "ski-pedos" remain a nostalgic favorite among many fans. Their simple concept created a play feature that even those who haven't seen a Snow Cat for many years can still remember. Aside from those, the vehicle featured a cockpit that could hold two figures. You could then arm it with at least 4 more troops on the outside foot pegs. (10 if you removed the ski-pedos.) The vehicle is nicely detailed and features many other smaller attributes that make it very realistic and fun to use.

The Snow Cat also continued the tradition of cool Joe vehicle drivers. Frostbite was a nicely detailed figure who perfectly fit with the Snow Cat. He also came with a unique rifle that was one of the coolest accessories produced in the line up to that point. It was this guy alone that fueled my interest in Frostbite. Over the years, I acquired extra Frostbite figures for the sole purpose of having spare examples of his gun. Going forward, this is a strategy that would be good for Hasbro to remember. One of the great features of the vintage Joe line was the vehicle drivers. The new vehicle drivers don't have anywhere near the coolness factor those old figures showcased.

From the minute I first acquired this vehicle, I felt it had a fundamental design flaw: the vehicle has no guns. For many collectors, this simply isn't a problem. For me, though, a vehicle without guns was simply not something I could really enjoy. I'm not much of a vehicle person. I prefer figures. As such, even as a child, when I did use a vehicle, it was usually in conjunction with several figures. As such, vehicles usually squared off against infantry troops rather than wheeled entities. A vehicle without guns was simply at too great a disadvantage. The later Cobra Wolf addressed this glaring need with the very cool gun turret that it sported behind the cockpits. The Snow Cat, though, just seems too poorly armed for me to use it as a stand alone entity. It has always needed either another vehicle that was properly armed with guns or a contingent of heavily armed Snow figures. In my estimation, though, that is the only area where the Snow Cat fails.

The Snow Cat suffers from 4 common trouble spots. First off, the steering wheel is often missing. Second, the windshield wiper is also commonly lost. (Plus, the nook that holds it to the canopy tends to break on more "played with" examples.) On top of that, the vehicle's signature ski torpedos are often also missing. If you manage to find a Snow Cat with all of those items intact, you still have to check the missile turret. The four pegs that attach the launcher to the shaft are VERY brittle and tend to break. As such, finding a mint, complete Snow Cat can get problematic. You will also pay quite a bit more for a mint, complete Snow Cat for these reasons.

The Snow Cat mold was re-used several times. It was released in 1988 as part of the Tiger Force subset. It was also released again as part of the Street Fighter line. The changes made to the mold for that release have been inherited by the new Snow Cat. Seeing a vehicle mold four times in less than 20 years is a testament to the Snow Cat's popularity. I still like to have my original as I don't have an arctic Joe vehicle (aside from the mighty Blockbuster tank!) that I like better. Seeing as how collectors seem to be enjoying this new Snow Cat, I don't think I'm alone in enjoying this mold.


Do you like the new Snow Cat? Let me know. 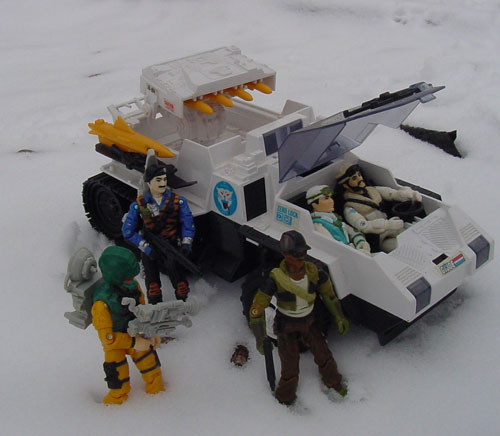 Posted by Robot_Sonic at 9:48 AM
Email ThisBlogThis!Share to TwitterShare to FacebookShare to Pinterest
Labels: 1985, Snow Cat, Vehicles