So far, in my opinion, 2003 has been a stellar year for new figures. While 2002 had its highlights, this year has really started to show some of the magic that was the hallmark of the original line. The figure sculpts are starting to come into their own. Each figure is well accessoried and is having accessories other than guns included with them. The colors are strong and show the diversity necessary to keep the line fresh. We have gotten a nice combination of old favorites coupled with some well thought out new characters who are expanding the Joe universe. Among these is the new Black Out.

As a character, Black Out is rather interesting. You see, he is the brother of Barrell Roll; a new character introduced in Wave 5. They are both the brothers a now mysterious female character named Cadet Bombshell. (What is this, M.A.S.H.?!? How about a little subtlety!!) This little twist brings a new element to the Joe world. While Cobra has had a couple of siblings working for it in the past, this marks the first time that relatives have been on different sides of the conflict. (Remember, Stormshadow and Snake Eyes were not blood relatives.) This provides a point of conflict that could prove compelling should it be played out in canonical Joe media. The different levels on which the familial conflict can be portrayed brings some depth to these new characters and makes the prime candidates to become a more well-liked faction of the new Joe continuity.

As a figure, Black Out is remarkable well done. He is cast in a combination of black, silver and brown and looks like the type of night op sniper who could wreak havoc when left untamed. As is becoming standard on newer figures, Black Out is nicely detailed but with a purpose. He has web gear, small grenades, and other minimalist trappings that make the figure appear realistic without being overdone. He also includes very nice accessories. He has the now common plastic "holster" attached to his waist. While this looks decent, it doesn't serve much purpose as it can't be removed and does not serve as a working holster for his small pistol. He also includes a newly molded sniper rifle that has the interesting detail of having a working bi-pod being attached to the top of the rifle. Again, the weapon is well detailed and fits the figure well. Perhaps the best accessory included with Black Out, though, is his goggles. These fit snugly on his head, but are not so tight that they will damage the figure. With them on, Black Out looks like a Cobra villain and has the menacing look you would expect of someone in his profession. While a small accessory, they are really what makes Black Out. They just add that little something extra to a decent figure that pushes him over the edge and makes him something a little more special.

One of the things I like most about the newer Cobra is that they are coming with exposed faces. Scalpel showcased this feature nicely and Black Out continues in this new tradition. While one of the hallmarks of Cobra was that they were a faceless enemy, having the new characters openly flaunting their countenances implies a little more air of arrogance among the new breed Cobras. It's almost a catch me if you can attitude where these new villains feel no need to keep the ability to hide among the masses. To me, this makes them more dangerous. An unknown enemy can cause problems as you never know who you can trust. An enemy you know, though, can be much more desperate as he has absolutely nothing to loose. If he's caught, there are no denying his crimes. This leads to a much more ruthless opponent and gives Cobra that little hint of danger that it's characters had been missing for some time. While I don't think that every new Cobra character should have an exposed face (in fact, it is necessary for the nameless troop builder figs to be masked) having one every wave or two gives Cobra back a little of the attitude and swagger they have been lacking in recent years. I like that.

In my collection, Black Out is an up and coming younger Cobra who still has something to prove. The fact that his brother is a Joe only makes him more suspect in the eyes of the Cobra hierarchy. As he completes more dangerous and challenging missions, the level of trust held in him will grow. Until then, though, he is a lone operative who does not command Cobra troops and is assigned a small, though often somewhat important, task that is part of a larger operation. In time, I could see this character having more responsibility. However, while his family ties give him some depth at this point in his young fictional life, I see them holding back his characterization at some point. The main reason is that once you've had your climatic scene with the brothers, there is no where left to go. You can either end it once and for all or simply repeat it ad naseum until it simply becomes a parody of the original story line that was compelling. As such, I can see me either killing off Barrell Roll or Black Out at some time. Their feud will grow tiresome and neither character will be able to grow without the monkey of the other off of his back. As we go forward and see what sort of roles these characters will play in other Joe media, I will decide their ultimate fate in my Joe world.

While Blackout is probably the coolest figure offered in Wave 6, he is also the most plentiful. In some of the Wave 5.75 cases that shipped sans the Sand Viper, Blackouts replaced the missing army builder pack. Of course, Wave 5.75 wasn't all that plentiful, so the total overproduction of Blackout figures is probably under 10% of the total production run. What this means, though, is that if you want a Blackout, you can find him. Wave 6 is just shipping to retail en masse right now. As Wave 7 is still a ways off, we should see Wave 6 cases ship for a long enough time that everyone will be able to get their fill of these figures. (And to make the Dart/Dr. Minbender pack a tremendous pegwarmer.) As with all new releases, though, I would recommend not putting off a Black Out purchase. After the Sand Viper, I can see this figure being the second fastest seller out of the case. While I don't think they will ever be scarce (and we are certain to see at least 1 more Black Out repaint at some point in the future), if you pass them by now, finding one later can be a hassle that is best avoided. To me, this is a nice figure that shows the remarkable improvements the line has seen in the past year. At this point, Black Out is one of the best new sculpt figures released. As Hasbro will continue to improve these figures, though, that distinction may not last. For now, though, Black Out is a nicely done figure and one that I am happy to own.

Blackout is a cool figure and one I'd like to see repainted at some point in the more distant future. In what color scheme do you think he would look best? Let me know. 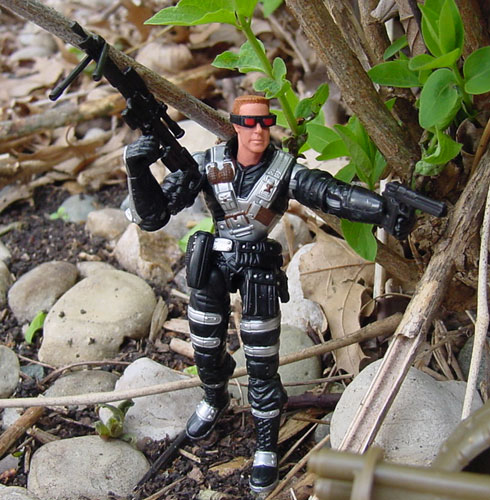 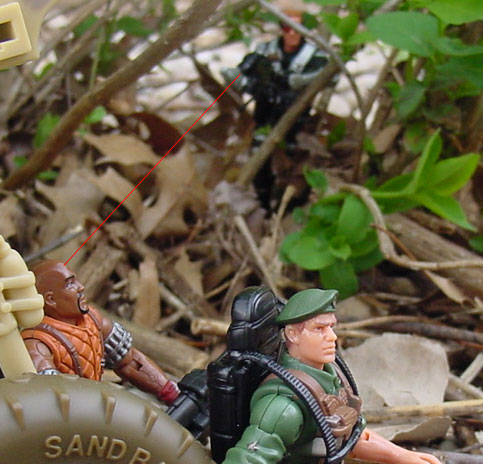 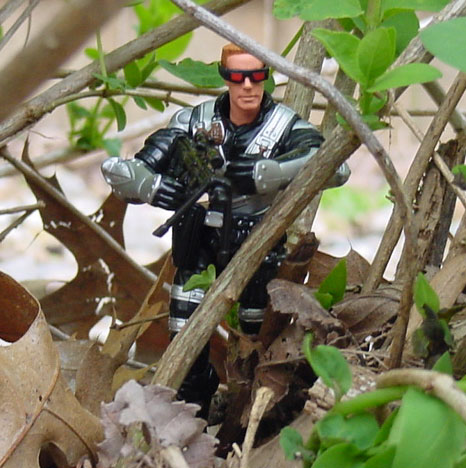 Posted by Robot_Sonic at 1:02 PM
Email ThisBlogThis!Share to TwitterShare to FacebookShare to Pinterest
Labels: 2003, Blackout, JvC