I've already profiled two other versions of the Wet-Suit character and this mold. However, those profiles were done in close proximity back in the site's earliest days. As such, I thought I would take an opportunity to profile one of the more recent interpretations of the original Wet-Suit mold. The fact that the repaint is done in great colors and finally gives the mold the final color scheme it needed is just an added bonus.

This Wet-Suit mold is classic. Made during the height of Joe's original popularity, it features all of the experience from the first 4 years of the line coupled with the availability of resources that were present when Joe was the toy king. As such, we are left with a timeless figure. What past incarnations of the Wet-Suit have lacked, though, has been proper coloring. While never bad, the bright orange and teal from the '86 and '98 versions kept the figure from being just about perfect. (The Mission to Brazil Wet-Suit fixed this but came with bright orange accessories.) This figure solves most of those problems. The figure is cast in a basic black with grey highlights. Rather than use bright colors for his secondary hue, though, this Wet-Suit has a dark blue chest. The result is a figure that finally looks like a combat diver.

Not that this figure is without its flaws. For one thing, the paint details are lacking. While not like the '94 figures who were simply painted in 2 colors, this figure does not have all the details that his earlier versions have enjoyed. This is most noticeable on his head. The piece is solid black with the only break the exposed skin around Wet-Suit's eyes. While not bad, you lose some appreciation for the mold's detail when points that were previously accentuated by differently colored paint are now melded into the figure's overall color appearance. It is a minor point, but something you notice when you compare this figure to previous uses of the Wet-Suit mold.

For me, though, this is about the perfect Wet-Suit figure. I've long used the original as a rescue and exploratory diver. He hasn't really seen the depth of combat that other, more suitable colored divers have experienced. The Mission to Brazil Wet-Suit filled this void when I was a child. Now, though, the expense of acquiring multiples along with the less than subtle accessories have made me look elsewhere. This figure will be able to act both as deep sea support as well as back up my S.E.A.L commandos in more shallow water based operations. His colors make him perfect for rising out of a murky depth and surprising a passing Cobra contingent.

This figure, like just about all the figures in gift-pack, suffers from a fatal flaw: his accessories. Wet-Suit is a diver. On top of that, he is a diver whose mold was designed to be used with his specific accessories. His head has the pegs for his breathing hose molded into it. However, the gift-pack did not include the proper accessories with the figures. Instead, each figure got the complement of accessories that was originally given to the original figures that comprised Wave 2 of the 2002 new Joe releases. While in some cases (Dial-Tone) the choices were okay, it left figures like Undertow and Wet-Suit with terrible choices of accessories like chainsaws and field packs. Wet-Suit includes a silver flare gun (from the 1994 Lifeline) a silver sound attack version of Tunnel Rat's gun, and a black backpack. None of these are the type of accessories that you would associate with a diver! He has no air tanks, breathing hose or fins. The lack of accessories leaves this figure almost useless in his intended capacity. Fortunately, if you can find them, the pack and hose from the '98 Wet-Suit figure, they perfectly match this color scheme and help make this figure useful. (You can see them on the figure in the pictures below.)

If you wanted to acquire the 8-figure Joe gift-pack of which this Wet-Suit was a member at retail and you live in the Midwestern United States, you were completely out of luck. The set simply was not made available to stores outside of the East and West Coasts. While this (apparent) lack of availability got one toy magazine to name this set as a good potential "investment", it frustrated many Joe fans who knew they weren't going to be able to find this set locally. Fortunately, many online Joe dealers were able to pick up some stock from Hasbro and offer the sets online. While this allowed many collectors who were geographically cut out of the availability for this set to actually acquire it, it did not really endear the entire situation to a great segment of the Joe collecting world. (The set was poorly boxed in a way that made it very expensive to ship for just 8 figures.) To add insult to injury, many BJ's warehouses got overstock gift pack sets after the Christmas holiday. As they don't like to stock toys during the non-holiday buying time, they clearanced the sets out. Many collectors got extremely lucky when they came across caches of the sets with a clearance price of $10-$12 each.

While this thwarted many of the non-Joe collecting speculators out there who were hoping to cash in on the set, it only further infuriated those who could not acquire it as they heard stories of people finding these sets for ridiculously cheap and passing them by. The only good thing about these clearances was that a few dealers were able to pick up loose figures for very reasonable prices. As such, you can now get a loose Wet-Suit figure for about $4. However, despite the figure's lack of accessories, at that price, they tend to sell out quickly. Many dealers still have the Snake Eyes figure and an army builder or two from the set but do not have Wet-Suit. This strikes me as a bit odd (especially considering how collectors flock to anything army builder these days) but speaks to the quality of the figure. Personally, I've long army built Wet-Suit figures and would like to be able to add a few more of this guy to my collection. He is the best colors of this mold that are not too expensive to drop into a mud hole and actually use. If you can find the right accessories to accompany him, I think your collection will welcome this version of Wet-Suit as well.

I'm well set for the gift-pack figures. Would you like for Hasbro to produce another set of this type for 2003? Let me know. 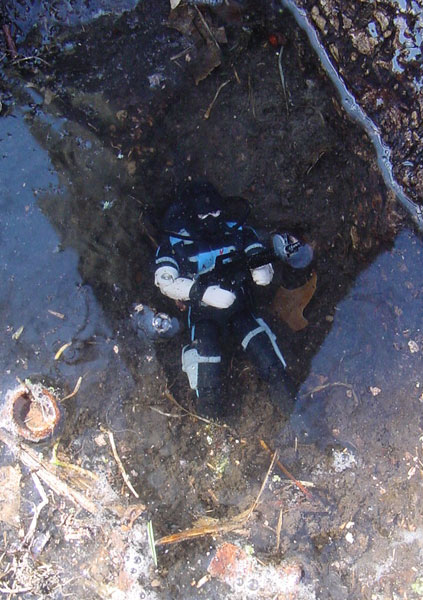 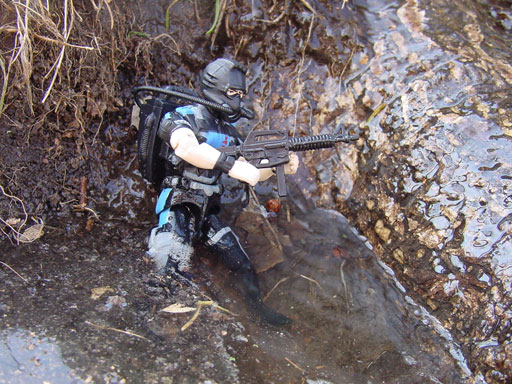 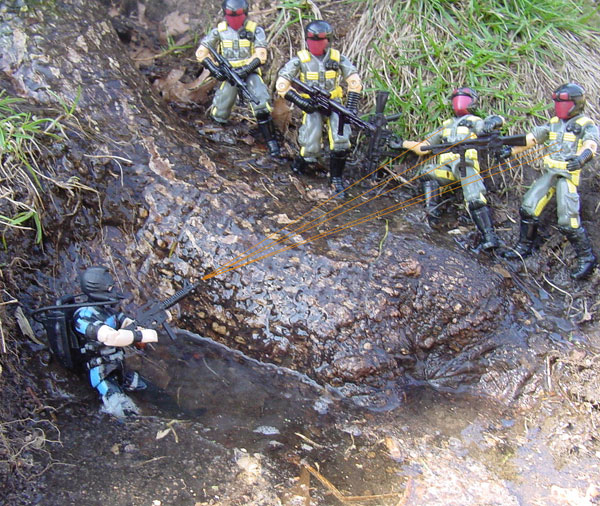 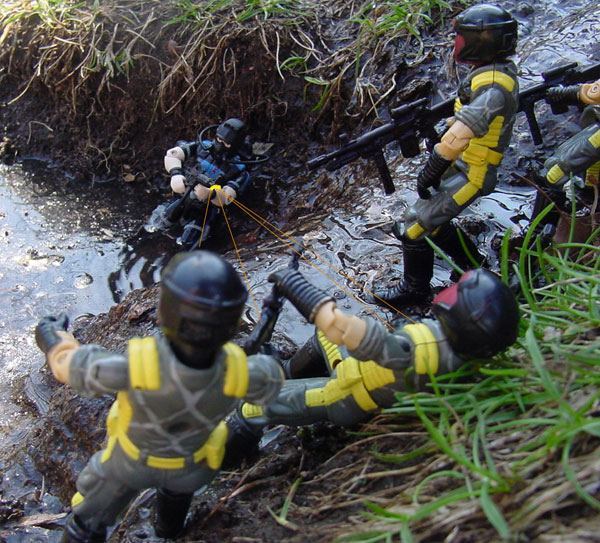