Back in 1989, I was out of Joe. It was the first year I did not buy any new figures. However, my youngest brother still, from time to time, would pick up a Joe figure or two. This allowed me the opportunity to keep up with the new releases without having to actually acquire any of the figures myself. Unfortunately, my brother's taste in figures left something to be desired. As such, he did not often pick the type of figure that I would have chosen were it I buying the character. One of his, at the time, garish choices is now the subject of this profile: Scoop.

Scoop was intended to be a battlefield reporter: someone who could document the happenings on a battlefield for either later training or simple evidence. In fact, his filename was an homage to a real-like reporter. While this concept was good, Scoop's usefulness was used up in his initial introduction story. "Hey, here's a guy whose teammates don't like him as he's not really a combatant." For a one-off story, Scoop was an okay character. However, he just didn't bring anything else to the table beyond that. As such, he remains an obscure character to this day. Most people just don't have a need for someone of Scoop's specialty in their Joe missions. The fact that his mold is poorly colored in bright yellow and dark green only helps to further sink him into Joe obscurity.

In my collection, Scoop basically has two uses. His more historic use has been as a gunner. For some reason, his helmet just made him fit into that role for me. He is, essentially, a nameless, faceless trooper type character who has a job as a gunner on my various vehicles. Usually, the gunner is among the first operatives killed when Cobra attacks, so my Scoop figures tend to have hard lives. The more recent niche that Scoop has filled is as a member of my security forces. He documents things like arrests, seizures and crime scenes so that the investigators have a record of the proceedings. I don't use Scoop as a real security officer, but as a tag-along who is responsible for keeping the officers honest. Of course, this leads to tension and resentment among the true law enforcement officials as they feel the character represented by this figure is there to keep tabs on them. It brings another element of conflict to my Joe stories and gives some of my more hardened law enforcement characters additional depth as they now have to deal with a rolling camera documenting their every move. Beyond those sparse uses, though, Scoop doesn't see much time out of his drawer.

The worst part about the Scoop figure is that his mold and accessories are actually very well done. Aside from the gaudy color, Scoop's mold is very worthy of praise. He is covered in little details that make the figure true to his specialty. He is covered in electronic gadgets that you would expect to find on a high tech cameraman. On top of that, you can plug his camera into a battery pack molded onto his leg. His accessories show an equal level of detail. The camera fits into a small notch on Scoop's pack, thus freeing his hands and enabling him to carry his gear efficiently. He also includes a nicely done helmet that is not too big to look nice. It even has a small microphone that protrudes from the side and adds another little cool factor to the figure. Finally, he includes a small pistol. It is not much, but something that works in the context of the figure. Basically, Scoop is perfectly outfitted with realistic accessories that would, were the figure better colored, probably have made Scoop a more popular figure.

Scoop figures are pretty easy to find. However, they are usually missing at least one accessory with his mouthpiece being the most common absence. With a little searching, though, you can find them as collectors, as a whole, tend to ignore this character. This means you can still get even carded Scoops for next to nothing. For as cheap as he is, he makes for great custom fodder as his specialty really lends itself to some sort of repaint. (On that note, Scoops parts also saw extensive use in South America. He, himself, (though with a slightly altered mold) was released in Brazil. However, his legs were then used on the Flying Scorpion and Tigor.) As collectors really don't mention this character at all, though, you still don't even see that many Scoop customs even though his mold screams for a repaint. To me, though, this character is someone one the very fringes of usefulness. From time to time, I can find a reason to include Scoop in a mission. But, those times are few and far between. This leaves me with a well molded, well thought-out, albeit poorly colored, figure. While some guys like this find themselves frequently used in my collection, it just doesn't happen with Scoop. He gets no press and remains fairly forgotten in my collection. Perhaps this exposure will help me remember him, but he is just not the type of figure who I think will ever see long term popularity. He is just another backup character in the Joe mythos whose most important role is that he makes the line just that much more diverse.

I'm good for Scoop figures. Do you find Scoop a valuable member of you collection? Let me know. 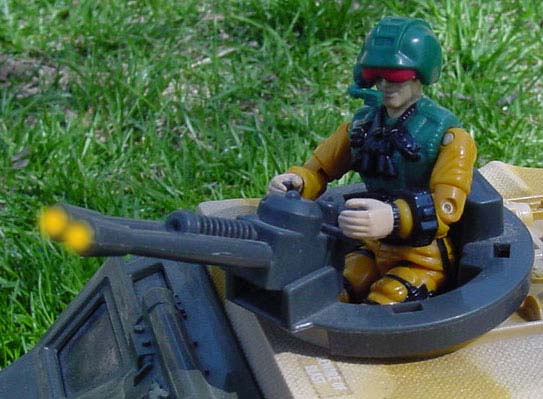 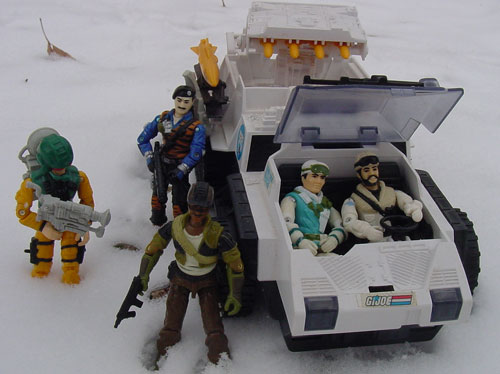 Posted by Robot_Sonic at 10:06 AM
Email ThisBlogThis!Share to TwitterShare to FacebookShare to Pinterest
Labels: 1989, Scoop