Vypra is probably the ultimate fan made character. She was created entirely by Joe fans and represents a lot of what fans might like to expect from a new character. She is a Cobra. She is female. And, she is a ninja. Many collectors see this as a positive thing as Vypra is what they want. To me, though, it diminishes the figure's overall value as her entire concept seems forced. The whole package was just too much and felt like they tried to pack the essence of all the fan favorite figures of the time into one new character. Of course, I'm in the vast minority on this part. And, while I don't like the concept of Vypra, her figures is actually well done and does succeed on the visual level.

Vypra is a straight up repaint of the 1987 Jinx figure. Her change in affiliation is her main selling point, though the new color scheme is decent enough. She is basically dark black and blue with wisps of white interspersed to give the color some depth. The overall effect is that you can actually see the figure, but the notion of her darkness is not lost. As a design, it is definitely something interesting and is different enough from Jinx's look that it is easy to accept Vypra as a new character. The marbleized effect gives her something that had not been seen before '98 and still leaves the figure as an a nicely done repaint. Vypra also includes the full complement of Jinx's accessories. It was a nice touch to fully accessorize the vehicle driver and makes finding a complete Vypra that much more problematic.

As she was released in 1998, Vypra has no real characterization beyond what appears in her filecard. As such, many Joe fan-fiction writers have taken to the character as they have been able to use her in any way they see fit. She is the only Cobra female who was not fully fleshed out in both the cartoons and comics and is about the only option authors have when they want a female Cobra operative for their Joe worlds. This has lead to Vypra getting a fan following as online collectors have the opportunity to see her in action in a number of dio-stories. Surprisingly, that exposure has been enough to take someone who should be obscure (like her contemporary, Volga) and vault them into the second tier of Joe figure popularity.

I don't use the Vypra figure at all. From the minute I got her a few years ago, she went into the '98 Joe drawer and hasn't emerged. I just don't have a use for the character. I do like what some authors have done where they have made Vypra Cobra Commander's bodyguard. However, as my Commander is now more ceremonial and has a contingent of private guards, I don't have a need for Vypra's services in that capacity. She doesn't fit with my new Cobra guard as they are more combatants and have moved away from the ninjas so heavily utilized by their predecessors. This leaves Vypra as the odd character out in my Joe world. She just doesn't fit with the Cobra hierarchy that I have established.

Going forward, I think Hasbro could look to the Vypra figure as an example of how to and how not to create a repainted figure. In some cases, making an old mold a new character will work. However, as many Joe characters are inexorably linked to their original molds, trying to create a new character from an existing mold can backfire. (See Wreckage.) Finding more obscure molds, or even those that haven't been used anywhere in the world in the past 8 years, seems to be a better way to create new characters. In Vypra's case, though, the idea worked. Even though we all know this mold is Jinx, the drastic color change was enough for collectors to suspend disbelief and accept this mold as a new character. Now that a repainted Jinx has been created, though, it's doubtful that this would work again with this mold. As Hasbro looks to create new characters or figure versions from existing ARAH molds, they need to remember that creativity is the hallmark. Overall, the repaints of 2002 and 2003 have been solid. The same could not be said of those from 2000-2001, though. Hopefully, we will continue to see a variety of molds and colors in the ARAH-style remakes. It just seems to work best.

The Jinx mold has only been used by Hasbro. After it's original use in 1987, the mold was kept in production as a mail away figure for many years. In 1995 or so, Hasbro used the body mold for Sonya Blade as part of the Mortal Combat line. There were two versions: one green and the other black that were quite popular among collectors for a while. The first whole body repaint was this Vypra in 1998. From there, Hasbro got some mileage out of the mold by producing a Jinx figure as part of the 2003 Tiger Force set. The mold then changed affiliation again and was used for the Cobra Ninja Strike Vypra figures in 2004. Also in 2004, the body mold appeared as part of the comic pack Scarlett. It has not appeared since but is a likely candidate for a future release since there are so few female bodies available in the ARAH style mold arena.

Despite her current pricing, Vypra was a remarkable peg-warmer at retail. Rattler jeeps were available at TRU's well through 2000, more than a year after they had last shipped from Hasbro. Back then, army building was not as in vogue as it currently is. Plus, as Joes were substantially less expensive back then, it didn't make a lot of sense for people to spend $10 for a Rattler jeep with a unique character when they could still easily acquire original Stinger jeeps with driver for even less than that. As such, collectors didn't tend to pick up more than 1 or 2 of the Rattler jeeps. Many of those who did, also quickly traded off their spare Vypra figures to those who didn't want to spend the money for the entire jeep. Of course, yesterday's pegwarmer is today's hot collectible as mint, complete Vypras can now easily top $40. Frankly, I don't know why. As a character, she is simply not really part of what I would consider cannon and couldn't have gained a fan base based upon her Joe media appearances. As a figure, she is interesting, but nothing so remarkably creative as to warrant such a high price tag. From a production standpoint, she is probably rarer than most figures produced for retail from '82-'94, but, again, there are probably exponentially more Vypras than there are 2002 Serpentor figures. As such, I think that Vypra figures are highly overpriced. I know I balked at paying $8 for one, but decided to take advantage since I needed her to complete my collection. Were it not for completeness, though, I would never have added this figure to my collection. I just don't get collectors' fascination with her. 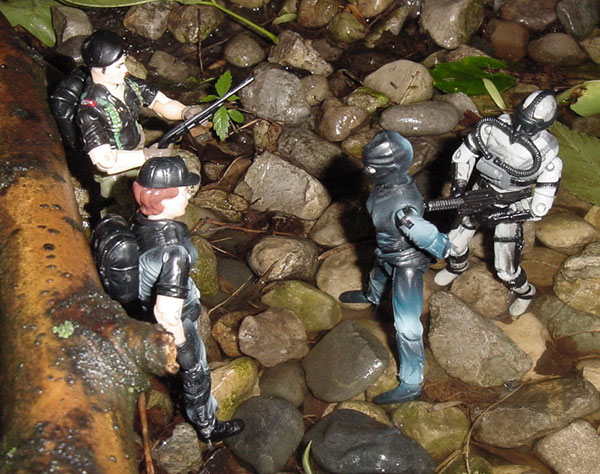 Posted by Robot_Sonic at 10:07 AM
Email ThisBlogThis!Share to TwitterShare to FacebookShare to Pinterest
Labels: 1998, Retailer Exclusive, Vehicle Drivers, Vypra