If your Joe eye has blinked any time in the past 120 days, you have missed quite a lot. Through the first 8 months of 2003, Hasbro released, essentially, 12 figure packs to retail. This was the beginning of the Spy Troops theme and offered some excellent new characters and molds. The drawback, though, was that these figures were available at retail for a long time and there were only 2 army building figures among the 12. The last 4 months of 2003 have seen a flurry of Joe releases. First, there was the highly anticipated Wave 7 (Though that, technically, appeared in late August.). Before that wave really had a chance to settle into retail, the first cases of Wave 8 were released. While collectors were still trying to finish acquiring that wave, the most anticipated wave of the year, the army building wave was released. That wave, though, quickly disappeared, leaving many collectors without the figures they wanted. The reason for the quick hook was that Hasbro wanted to get the 2004 Venom vs. Valor figures on the shelves before Christmas. This lead to Wave 9's appearance at retail in early December. This, alone, made for 24 figure packs that were released in the final third of this year: twice as many as were released in the previous 8 months. There was one last surprise, though. Hasbro offered Wal-Mart an exclusive 6 figure repaint wave that was to be released under the Venom vs. Valor banner. This wave was 3 desert Joe repaints who were paired with 3 urban themed Cobra army builder repaints. This brought the total to 27 figure packs released in the final 4 months of 2003. A huge number of these figures are army builders so budget conscious collectors have had to make some tough choices. The saving grace is that these figures have been the best new sculpts to date and the repaints, in this case, are inspired. As such, I felt it appropriate to profile the Urban Neo-Viper from these Wal-Mart exclusives.

In my opinion, this Wal-Mart wave is a perfect example of repaints done right. Hasbro has tried to theme some repaints in recent waves, but I don't like that approach. What we've ended up with is a hodge-podge of characters that don't really fit into a theme. The Night Force repaints are scattered and it's hard to piece them together as a cohesive unit. (Especially with the long time between some of the wave releases.) Offering repaints as an exclusive is a great way to fit a number of like-colored Joes and Cobras together without making a full release figure wave too bland. Rather than the full 12 figures that comprise a normal, full retail wave release, this exclusive wave only offers 6 figures. That is the perfect number as it doesn't allow the theme to overtake the importance of the entire line, but does offer collectors and children alike some variance in their figure purchase choices. Going forward, I would prefer to see smaller exclusive waves like this for repaints rather than having them spread through full retail release waves. That will keep the full releases fresher and allow Hasbro to better time their releases for 2004.

This Wal-Mart exclusive figure wave features 6 figures: Duke, Roadblock, Gung-Ho, Iron Grenadier, Cobra Claws and this Neo-Viper. The Roadblock is a straight repaint of his Wave 6 release. The Gung-Ho, reuses the awful non O-ring mold from Wave 1 of 2002 and, as such, is really out of place in this wave. The Duke is more interesting as he is an amalgamation. He features the Wave 4 Duke head on the Wave 3 Snake Eyes body. I like this approach as the figure is not a straight repaint and offers something more exclusive than just figure color to this wave. The IG is nicely cammoed re-do of the figure we've already gotten at retail twice in 2003 and the Claws is the O-ring version. (And is, in my opinion, the best version of Claws to date.) The three Cobras mesh well together and work well as an urban assault force. All the Cobras feature their basic accessories that we've grown accustomed to. However, the dreaded sound attack weapons make an appearance in these sets. While the Cobras at least have guns that are usable, some Joes do not. Duke only has a sound attack gun and that, to me, makes him less desirable than he should be. These figures also feature spring loaded missile launchers. (Yes, these sets feature 2 of the most hated additions to the Joe line, spring loaded missile launchers and sound attack weapons!) The nice thing is that the figures are evenly packed in the cases and are shipped in ratios that make it possible, should you find these guys, to build an army in short period of time.

I have always liked the Neo-Viper mold. From the first non O-ring figure from 2002 to this figure, the mold is just solid. He looks like the updated Cobra trooper he is supposed to be. He is articulated in a manner that allows for some nice action poses and makes him the type of figure that is easy to display in a variety of ways. The inclusion of the unique rifle and pistol with this version really make him a more desirable alternative to army building than many of the Neo-Vipers of the past. His colors really allow for some diversity in his use. The marble, white, black and bright red Cobra sigil work in a way that allows this guy to be used in arctic, urban or mountain environments. To me, this makes this version of the Neo-Viper the most useful of all his incarnations.

In my collection, Neo-Vipers are the replacements for Vipers. I was somewhat disappointed to see the Viper character appear in Wave 9 as I felt that it was the Neo-Viper who really occupied this position in the new Cobra. I feel that it is the Neos who make the basic grunts of the Cobra legions and their different uniforms allow for their appearance in all situations. Going forward, I think I'll keep that concept intact and use the Viper as a higher ranking trooper who is a bit more elite than the standard Neo-Viper. My new Cobra will be a bit more streamlined than my ARAH-sculpt based Cobra as I feel that Neos will comprise the bulk of my troops. The other Viper types will be more highly specialized and exist in far fewer numbers.

This figure's availability is not yet determined. It could be that Wal-Mart will completely sell out of this wave before Christmas and those who don't have this guy will be left in the cold. However, that is unlikely to happen. I would imagine that this figure will be available at retail well into the start of 2004. As he ships 4 to a case instead of 2, it will take longer for even a small shipment to sell out. Plus, there are thousands of Wal-Marts in the U.S., and even the most remote American collector usually has access to more than one. That should allow collectors to get their fill of this figure. International collectors, though, are less lucky. As this is a Wal-Mart exclusive, it will only be available in the U.S. Online Joe dealers won't be able to get these figures without buying them at retail and passing the markup on to foreign buyers. This is unfortunate as this is a nicely done Neo-Viper. Hopefully, 2004 will see Hasbro take at least some steps to help overseas and remote collectors who can not find items at retail. For, when they start producing even repaints of this quality, Joe's popularity can only be supported.

What do you think of this method of repainting army building figures? Let me know. 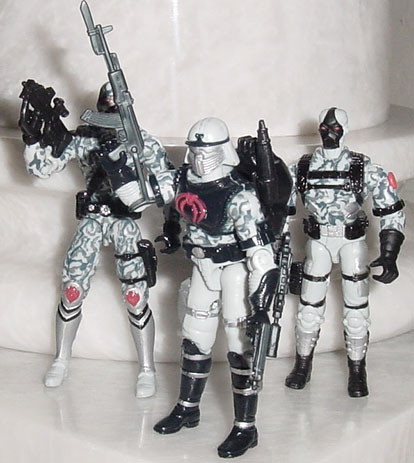 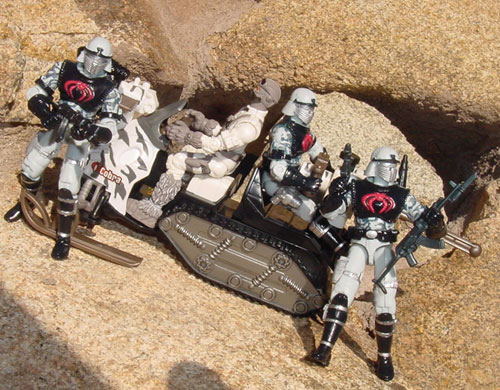 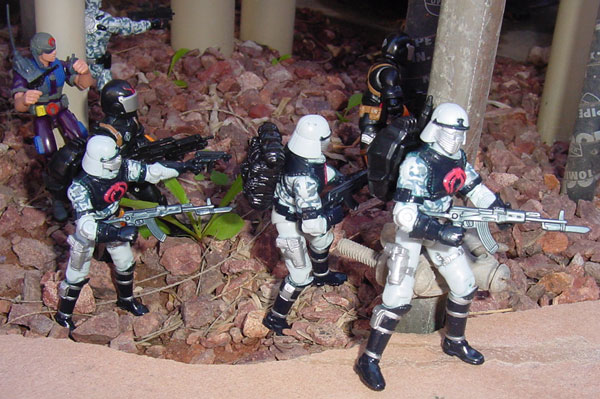 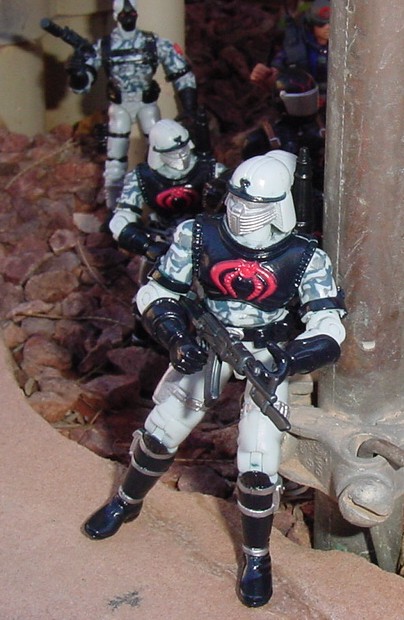