1991 was an odd Joe year. It really marked the end of the line that had existed from 1982-1990 and ushered in the rapidly approaching end. In prior years, Hasbro had mainly focused on their basic series of carded figures. This was the line's staple that was supplemented by vehicles, playsets and other related toys. In 1991, though, Hasbro really seemed to lose focus. While subsets had really started in 1987, they had still been primarily contained to either retailer exclusives or slight variations of the main carded line. In 1990, though, they started to waver a bit. Sky Patrol ushered in a wave of themed carded figures who were offered at a higher price point. 1991 took this idea to it ridiculous extremes as Hasbro brought out a number of alternative figure packages that were all more expensive than the basic carded figures. The result is that most figures from 1991 were only produced that one year before they were pulled from retail while Hasbro tried to regroup with their 1992 offerings. (It is interesting to note that just about all of the basic 1991 figures were released in many different countries shortly after their American release as Hasbro tried to recoup their development costs.) The nice thing about 1991, though, is that it is actually full of very nice figures who round out a collection. Not all of them are in the best colors, but the mold design is easily on par with any prior year. A perfect example of this is the 1991 Skymate figure.

On the surface, Skymate is an ok figure. He seems to have a good base color, but his details push him into a place where most collectors don't really care about him. A closer look, though, shows this mold's true value. Skymate is full of intricate detail and great sculpting. He has a number of small, easily overlooked features that make this mold stand out from many others. His wrist knife and the arrows on his legs all play into his specialty as well as his accessories. A complete figure makes sense when you see the small details that expand the overall figure. His neon paint details do detract from his overall appearance, but Skymate would be downright awesome in a new jungle or desert color scheme. His painted details would be a perfect example of the sculpting prowess that was still evident in the Joe line as it wound down.

Skymate also features a nice complement of accessories. While the bright yellow bow and hot pink boomerang don't have colors that are very useful, they are original, well designed accessories that accent the figure perfectly. The bow has the bonus feature of attaching to Skymate's chest. This enabled him to carry it while flying his glider. It is more compact than the bows included with other figures and has a nice, sturdy design that prevents it from breaking. The small, easily lost boomerang fits into a snug holster on the figure's waist. The weapons fit Skymate's background as an Australian soldier, even if they are cliched. The fact that they are so integrated to the figure mold, though, makes Skymate a unique figure in the line. Had he been released in 1986 instead of 1991, he would probably be one of the more popular figures among collectors. The accessories only enhance the overall figure. This is an art lost on the current crop of ARAH-style Joe figures. They include accessories that are there or that are common. Their weapons don't add to the figure's personality and leave them rather bland. Even a small accessory like a boomerang, though, gives a figure more character and makes it more memorable. It is a lesson that would be well learned by the current Hasbro.

Skymate was only released by Hasbro. While many of his contemporary 1991 figures globetrotted as Hasbro tried to recoup development costs, Skymate was left behind. None of the other three contemporary glider figures (Cloudburst, Sky Creeper and Night Vulture) were released outside the US, either. The gliders themselves went down to Brazil where they were released with different figures. At this point, it is not known if the figure molds followed them and were simply never produced by Estrela or if they remained under Hasbro control and have been forgotten. If these glider molds are available, though, they would make excellent candidates for re-release. All of them are nicely done molds who suffered from poor color choices. The fact that they all are rather difficult to find on the second hand market only makes them better choices for a repaint.

As a character, Skymate doesn't have much to offer. He's Australian. That's about it. The nice thing, though, is that this leaves Skymate as a character who is free for collectors to characterize however they want. I have yet to really find a niche for Skymate. I like the figure, but don't see him ever being an important player in my Joe world. He is too specialized and doesn't fit with the look of the figures who see the most use in my collection. He is, though, a solid background character who, were he re-released in slightly better colors, could find a place in a strong supporting role. For now, though, he remains a fun figure: one who is occasionally used as a diversion from the now melding-of-common-colors that the Joe line has become.

Skymates are very hard to find. He also has the double whammy of having a small, easily lost accessory. While his boomerang is bright pink and not as easy to lose as, say, Heavy Metal's mic, it is an item that is difficult to track down. The figure itself isn't often seen just due to his odd method of release. All of the 1991 glider figures are rather tough to find and can be difficult pieces to add to your collection. In recent months, I've seen complete Skymates sell for as cheap as $4 and as much as $40. The disparity is based on the marketplace. There are a many collectors who don't have this figure and complete specimens are few and far between. If just one collector is looking when one pops up, you see them go cheap. But, if even 2 are in competition, the $40 price tag becomes more likely. Truth be told, $20 or so is probably a good price for a complete version of this figure. He is hard to find and his accessories are among the most difficult post '87 pieces to track down. Plus, he is a good mold. At some point, more collectors will realize that and many will wish they had seized an earlier chance to acquire Skymate. 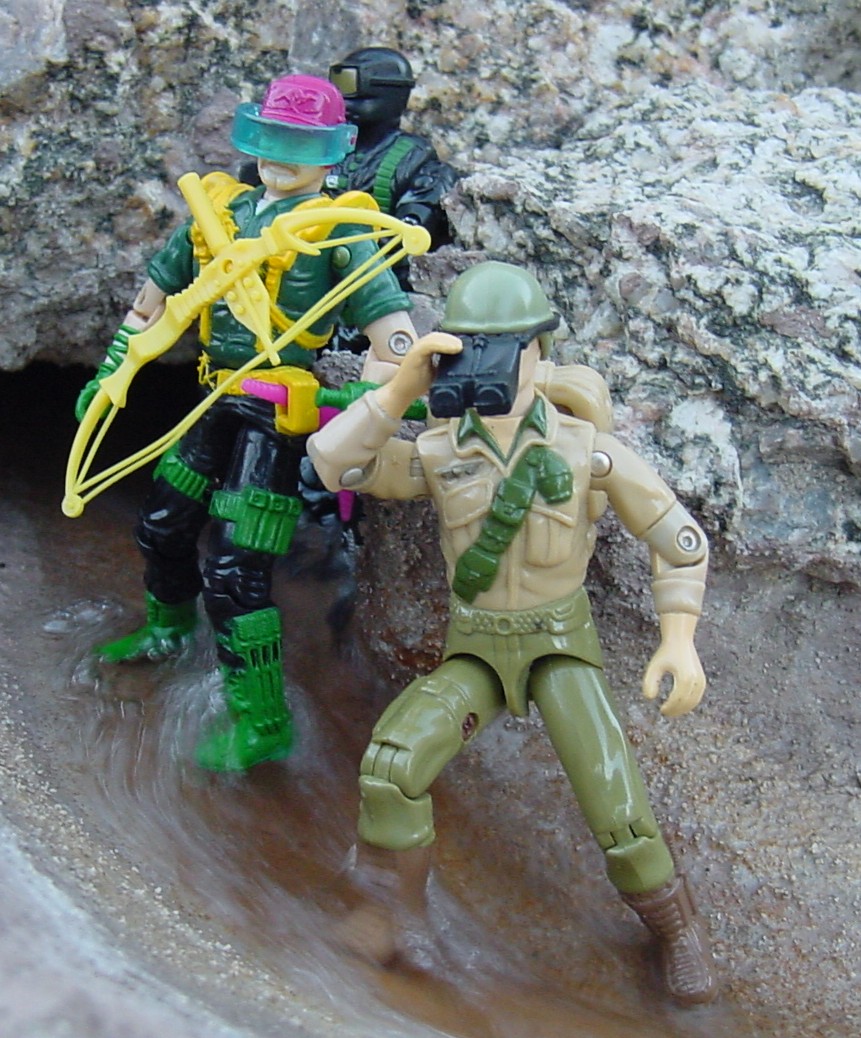 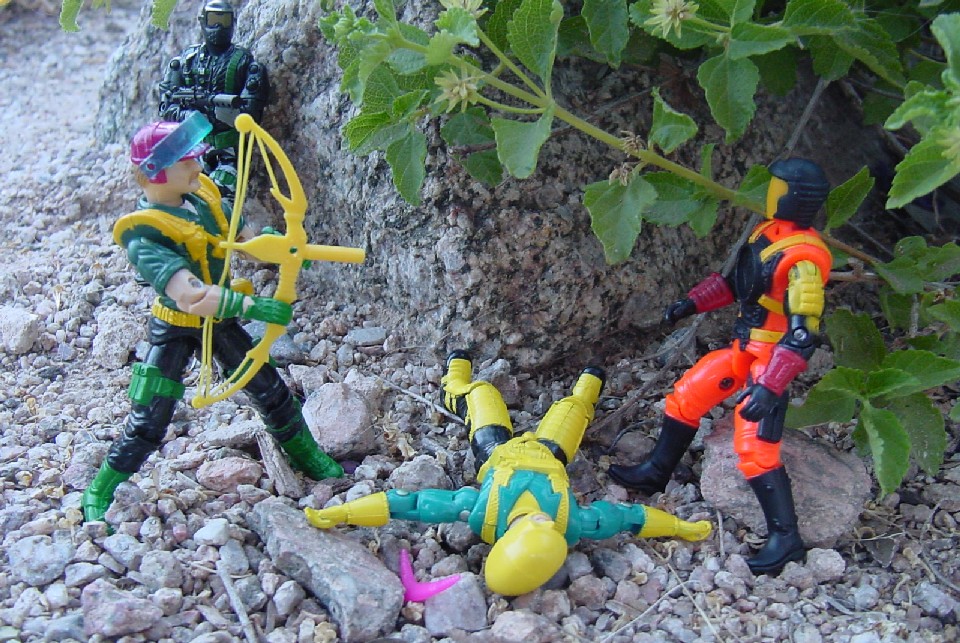 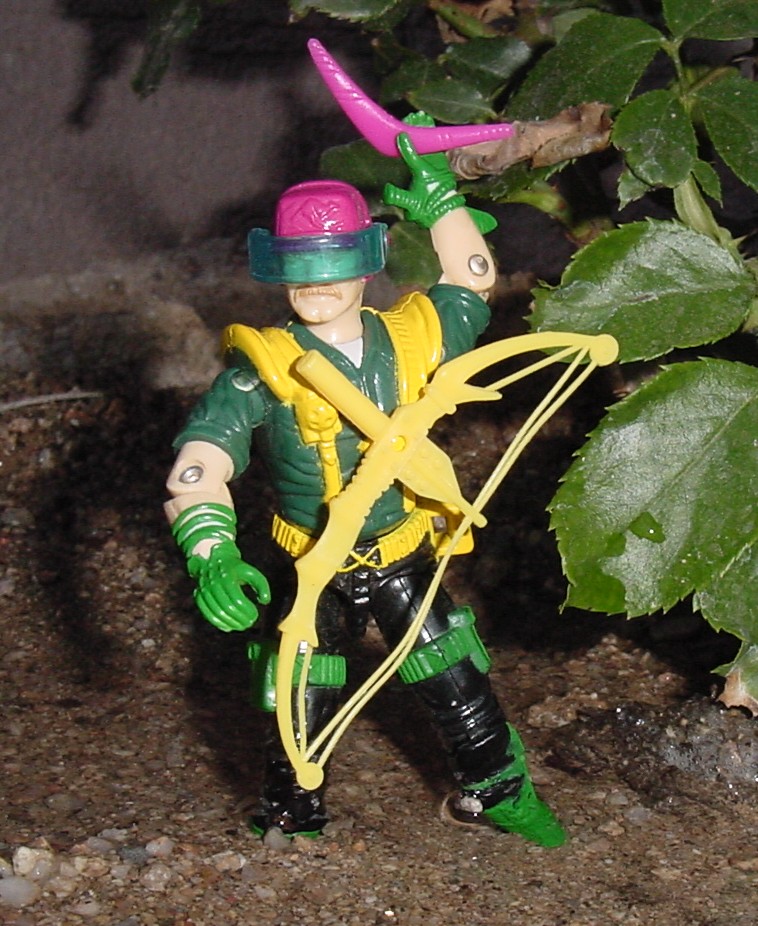 Posted by Robot_Sonic at 9:10 AM
Email ThisBlogThis!Share to TwitterShare to FacebookShare to Pinterest
Labels: 1991, Skymate, Vehicle Drivers