Since 2002 the annual G.I. Joe convention has offered collectors a multitude of exclusive figures. Most of them are molds that are not otherwise seen: but at a higher price. As such, the convention exclusives are still a source of much debate among the collecting community. However, for the most part, the figures that have been offered have been a nice change from the bland retail ARAH releases that we have seen. While some of the character selection has been suspect, the Convention figures have also brought back a wide variety of obscure molds that had never previously been repainted. Zanzibar is just such a figure.

Zanzibar has had a tough life in my collection. When I first got the original figure, he quickly became one of the most used characters in my collection. His unique look, solid colors and cool accessories made him an essential element of my enemy minions. Unfortunately, by the time Zanzibar came out in 1987, I was near the end of my Joe collecting childhood. So, one fall day, some friends of mine and I decided to torture a few Dreadnoks. My parents had a two-story garage. The top part was wood with a window. The bottom was solid cinder block. So, we got a long string and hung Monkey Wrench and Zanzibar out of the second story window and then threw ripe walnuts at them. Somehow, Zanzibar escaped relatively unscathed. Monkey Wrench was pretty much destroyed, though. However, to prove that escaping that fate wasn't enough to spare his life, that original Zanzibar also fell prey to my family's new puppy in the early '90's. While I still have the figure, he has a many broken parts and a hand that was gnawed off.   Usually, though, having a mauled childhood figure isn't too big a problem for me. In the years I've been collecting, I've managed to replace just about every figure I've ever wanted. However, for some reason, Zanzibar has been hard for me to acquire. I have never picked up another version of the original figure. He and the 1987 Mercer remain the 2 childhood figures that have simply eluded me in my adult Joe acquisitions. I'm not really sure why, but it has allowed me to remember Zanzibar for what he was in my childhood rather than what I did with the character as I got older.

This convention figure, though, really doesn't offer much that hasn't been done before. Sadly, the Dreadnoks are not molds that really lend themselves to repaints. Their tattered look is hard to disguise with color and most of the repaints fall flat due to that reason. It's not that the figures are bad, it's just that they don't really supplement the original versions. Instead, they offer a replacement. When I'm buying a repainted figure, I want it to be something that the original figure is not. In the case of Zanzibar, the only thing he offers beyond the original is the fact that I have a nice copy of this version. However, this Zanzibar is still a nice figure. He features an intricate paint mask with a full 8 different colors. He has sharp details painted all over the mold including a brown eyepatch string that surrounds his head. This is a detail that was even left unpainted on the original figure in 1987. It is in this detail that the convention exclusive figures succeed. Most of them feature these complex paint applications that simply make their contemporary retail release ARAH figures pale in comparison. Of course, this is problematic as collectors see the nice paint masks on convention figures and then see the skimpy coatings on retail figures. It does create a dichotomy among the series and perhaps shrouds a bit of resentment among those who are not able to acquire the convention sets as they feel they are financially distanced from quality figures.

In my collection, this Zanzibar is just Zanzibar. He no longer is the major player he once was, but is a useful character from time to time. I mostly use Zanzibar as a scavenger who sells scrap and other materials to Cobra. They melt them down and re-use them for projects on Cobra Island. Zanzibar still retains some affiliation to Zartan. But, since Zartan has moved more into the higher echelons of Cobra politics in my Joeverse, Zanzibar has little contact left with Zartan. While I still retain Buzzer as someone who participates in Cobra operations, I don't use Zanzibar in the same way. He is simply someone who might be found on Cobra Island at any given time. If he hears of some mission or objective that interests him while he is there, he might go along: if the price is right. Since this no longer really fits the aims of my Cobra, Zanzibar is mostly left as one of the fringe characters who might show up every now and then but is mostly a farce among the real combat troops who now comprise most of Cobra.

As far as availability goes, this figure is both somewhat rare and also somewhat common (as convention figures go!). At the 2003 Convention, Master Collector publicly brandished the production numbers for their Firefly packs. This year, though, there was no such hullabaloo. In fact, despite convention goers purchasing multiple packs for friends back home, Master Collector had some of these sets left over. (My guess is that the $40 price tag for repaints of easy to find and not highly sought after figures may have played into that.) As such, many collectors had their chance to add these figures to their collection without having to spend outrageous sums on the secondary market. In the long term, though, this Zanzibar (and the other Convention figures) will become harder to find. As their entire production run is concentrated in the existing collector base, though, I don't foresee a large price increase as the demand has already been met. That isn't to say that this guy will be able to be had for under $7, but it does mean that I don't see him ever running upwards of $25 or so. 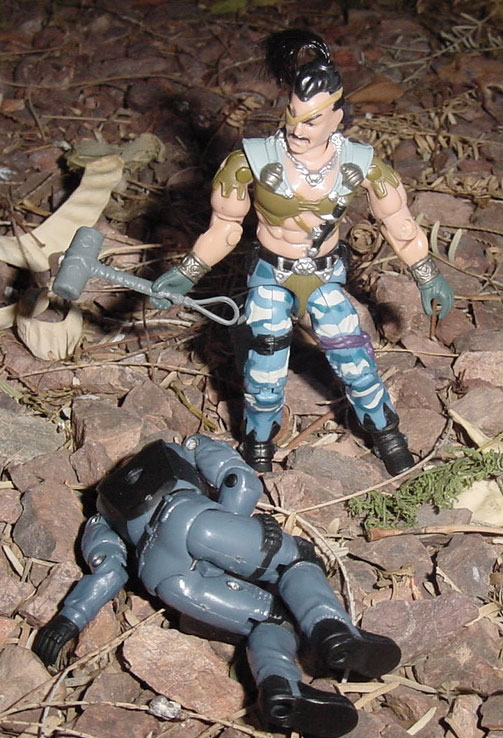 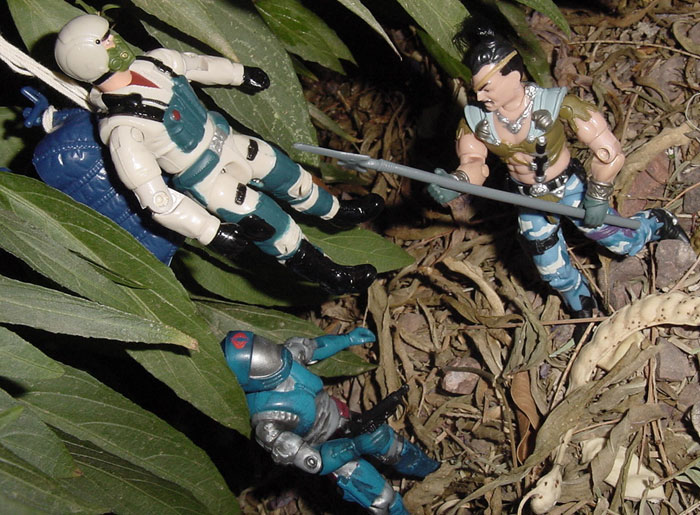 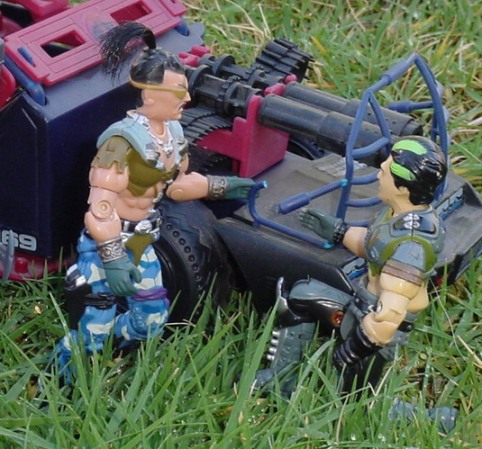