The hallmark of this site has always been obscure and often poorly colored figures who, were it not for their off the wall paint schemes, would be more appreciated by collectors. The Joe line is full of high quality figures who suffer from poor paint jobs that take away from what should be a cool mold. Many of these figures were released during the final years of the original retail run. The 1991 Sludge Viper is just the latest figure I've profiled who fits this description.

The Sludge Viper marks a dubious distinction in the history of the Joe line. While we had seen other subsets and teams marketed in the Joe line in prior years, those had all still been true to the main Joe theme. With the Eco Warriors in 1991, it marked the first time that Hasbro no longer lead innovation in the toy world: they followed it. Environmentalism was very hot during 1990 and 1991 and Hasbro used the Eco Warriors to cash in. At the same time, they began the downward slide of the Joe line into the fragmented neon final years. The thing that made Joe so powerful throughout the '80's was that it was true to itself and didn't follow the latest fads to try and gain market share. Perhaps Joe sales were already slagging by '91 and that lead to a change in philosophy. But, with the advent of the Eco Warriors, Joe suddenly became a toyline that mimicked current fads and lacked the distinct vision that had made it a powerhouse in the previous decade. It was a monumental change in the way Joes were developed. Yet, this new philosophy is the one that the modern Hasbro is closer to. They seemed to have lost their ability to innovate and lead with the 3 3/4 Joe brand and '91 can be pinpointed as the point where the slide really started.

The Eco Warriors seemed to have been a popular enough subset. The '91's were pretty much gone from retail by '93. Hasbro also produced a second series of them in 1992 with some new members. (The '92 Eco Warriors figures, though, are a bit tougher to find than the '91's.) A third Eco Warriors series was planned for 1993. However, it was scrapped at the last minute. It was ditched so late in the process that Hasbro had already put two of the figures (Outback and Snow Storm) into production. These figures were released anyways on Battle Corps cards in their Eco Warriors colors. The figures were "corrected" to non Eco colors (though I'm not sure how blue and orange on Snow Storm could be considered less "Eco" than the straight orange of the 1st version), though, rather quickly. Around 1993, the Eco Warriors concept was exported to Brazil as Forca Eco. This series featured 3 exclusive Joe frankensteined repaints, one exclusive Cobra and a repaint of Cesspool. After that, though, the Eco Warriors concept was pretty much finished.

The Sludge Viper was released by Hasbro in 1991. In subsequent years, Hasbro packaged the figure in various countries and the Sludge Viper saw a wide release. It was not until 2001, though, that a repaint was used. The 2001 Sub Viper was a straight repaint of the Sludge Viper. This time, though, it was in colors that really showcased the mold's depth and proved to collectors that the mold was not bad: just the original paint job. Since 2001, though, we have not seen the Sludge Viper mold. Frankly, I'm not sure why. While the same Cobra figures have been repainted over and over again, a figure who was used less than 5 years ago, is a solid mold and is versatile enough to have multiple uses has been left on the shelf. It's possible that the Sludge Viper mold went to India along with Law, Big Brawler, Ambush, Major Bludd, etc. and is no longer usable. But, if he is available, I think he would be an excellent figure to repaint and re-release. It's a shame that collectors have to wait for expensive convention exclusive figures to get decent repaints of many of the '90's molds. The few repaints of '90's figures that we have seen prove that many of the molds are just as good as those from '80's. They just suffer from bad color choices. If only Hasbro would realize this and put some effort into their future ARAH repaint offerings.

In my collection, Sludge Vipers serve the same purpose as Toxo Vipers. The only difference is that Toxo Vipers are more combative in their duties and serve in combat zones. Sludge Vipers are more of the support structure. They have experience working with dangerous elements, but do it in a more controlled environment. The tend to appear in labs or in controlled field settings like a pipeline on Cobra Island. This is a rather limited use, but the mold's colors force my hand on that. I'm not too taken with the combination of yellow and blue. While I like bright figures, I like complementing colors. To me, this figure lacks that. As such, they don't see much use.   That isn't to say this is a bad figure. The mold details are quite intricate. I think that with different colors, this figure would work great as a diver, pilot or even a new version of BAT. The armour covered with electronic gear and the futuristic helmet allow the figure a degree of diversity that could be exploited through different color schemes. The solid yellow armour hides many of the smaller details of the mold and gives the figure a bland appearance. Even one or two small extra paint applications could breathe immense amounts of new life into the mold and allow for its greater appreciation.

It seems that Hasbro put a lot of eggs in the Eco Warriors basket and produced a large number of them. While their original retail price point was higher than the basic figures, it seems that the Eco Warriors were popular among kids of the day. As such Sludge Vipers are now rather easy to find. Many of them exhibit play wear and the color changing paint tends to deteriorate over time and can become "stuck" in one shade or another. But, that still doesn't make mint Sludge Vipers hard to find. These days, though, figures from the final 5 years of the original retail run are a bit more desirable. (A dealer recently told me that he now sells more figures from '90-'94 than '82-'89.) This can be attributed to the double whammy effect of older collectors who grew up with the '82-'89 Joes having completed those early years and moving to the later years to finish their collections as well as the rise in younger collectors who came of age during the '90-'94 timeframe and who consider those years the epitome of Joe. Still, this doesn't mean that Sludge Vipers are expensive. You can usually get them mint and complete with filecard from various dealers for around $10. However, deals still abound. Many non-Joe dealers and comic/toy shops still see any neon figure as undesirable and price them as such. I've found multiple mint and complete Sludge Vipers in the past year for $3 each. So, a little patience and shopping around can pay off nicely. I feel the Sludge Viper has his uses, but isn't a figure of overwhelming importance to my collection. For cheap, I'll acquire more. However, they are not a figure that I will actively seek out. Most collectors seem to have this attitude towards this figure and others of similar color and style. It affords collectors a chance, though, to acquire a decent army builder for a fair price. These days, that is becoming harder and harder to do and I fully suggest taking advantage of these opportunities when they arise. 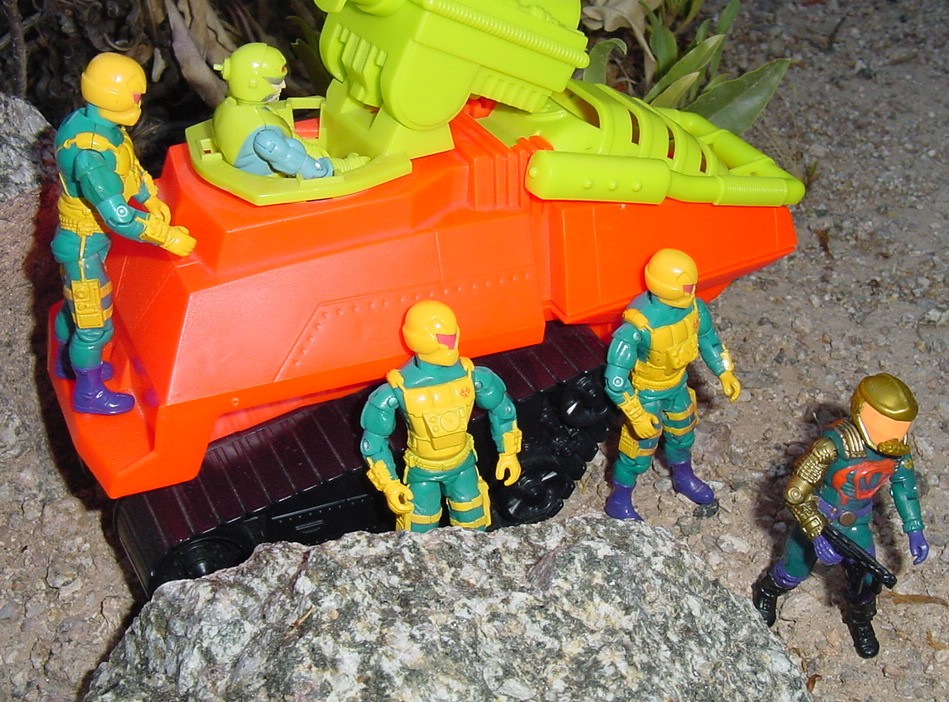 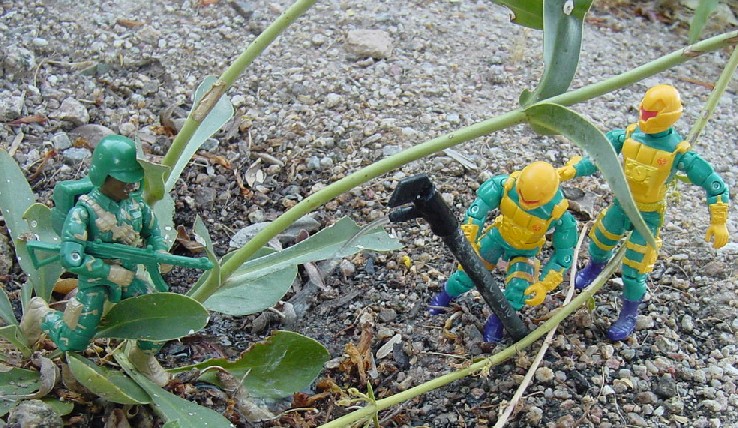