In 2004, Hasbro announced they were producing 3 figure packs that were based on issues of the classic Joe comic. When the first pictures of these surfaced, collectors were quite pleased with the results. At the '04 convention, more figures were shown and collectors were even more excited over the possibilities that were shown. Now, over a year later, all of those figures have been released and we are afforded the luxury of hindsight to see how the line fared. While the comic packs gave collectors some of their most requested characters, they also suffered from repetitiveness and many poor mold choices. As such, I would rate the entire exercise as mediocre. It was a great idea. The execution lacked the direction, though, to produce a line that was truly memorable. One figure who perfectly personified my opinions of the packs as a whole is Rock and Roll.

Rock and Roll was released in the 3rd series of comic packs. He was included in #8 along with Short Fuze and an astronaut Flash. His series, though, also featured packs 6 and 7 which included the fan favorite and highly anticipated Oktober Guard figures. Naturally, this put Rock and Roll's pack in an immediate bad spot as he was doomed to be a member of the least popular pack in his wave. It's not entirely justified, but the inclusion of 5 new Oktober Guard figures were simply so desired that Rock and Roll's pack was not fairly judged from the beginning.

Rock and Roll was the Joe team's original machine gunner. He was actually graced with a unique chest mold on his original figure in 1982. (This mold was later exported to Argentina, Brazil and Mexico. The mold was also used in Argentina as part of the Shimik figure. It is likely that this mold died in South America as Rock and Roll was missing from the 1997 Stars and Stripes set even though the back of the package showed that he was intended as a member.) While this updated figure is an homage to the original design, the longer hair and full beard actually looks a bit dated. While that isn't too bad for a figure intended to be a throwback, it does somewhat limit his appeal to newer collectors.

On the surface, this figure is actually quite good. Where most of the comic pack figures failed was that they went sequentially from the first issue of the original comic and used many original molds from the '82 series. While these molds are historically significant, the fact is that they are very dated: even when compared to figures released only a few years after them. This lead to a great deal of repetitiveness in the line as Hawk, Stalker, Zap, Stalker again and Breaker all used the same body in the same basic colors. Where Hasbro broke this trend, though, they actually got rather creative. Clutch, Steeler, General Flagg, Grunt and Rock and Roll all used different, more modern parts to create figures that better fit within the context of the Joe line as a whole but were limited by the fact that, again, they were in the same basic colors as the other figures who used older molds. The fact that the use of the Big Ben body for Rock and Roll actually is in line with the characters original appearance showed a level of planning that has been missing from most of the ARAH style Joe releases. But, even this had a flaw.

While Rock and Roll's colors and body mold are a perfect update to the original figure, the sad part is that the mold choice was already too common for it to have the necessary impact. Aside from the fact that Rock and Roll used the same General Tomahawk legs as most of the other comic pack figures, the Big Ben torso mold has been released 3 times since 2001. One was a huge pegwarmer and the other two were included with highly collectible army builders. As such, many collectors have grown tired of the Big Ben mold and have little love for the character. On top of that, the Schrange figure who was released the same time as Rock and Roll in comic pack 6 used the same chest. While it was differently colored, it still was a glaring misuse of parts in too close of proximity to each other. This left Rock and Roll feeling like he was less original and just more of the same, tired figures Hasbro had released since 1997.   The bright spot of the Rock and Roll figure, though, was the newly sculpted M-60 machine gun and bipod. This new weapon was slightly shorter than the original sculpt M-60 but has more bulk. It fits with the scale of the figure perfectly. It is highly detailed and is probably one of the best new sculpt weapons to appear in the comic packs. It is of high enough quality that it simply must be re-used more in the line. Figures like the SAW Viper, Roadblock, Vietnam Snake Eyes and even another Rock and Roll would be perfect candidates for this weapon. While I don't want to see it released with every figure, it would be a better choice for many potential characters as the line moves forward.

For some reason, Rock and Roll never really played a big part in my collection. As a kid, he was one of the last original figures I acquired. By the time he was added to my collection, Roadblock had already come along and replaced much of the need for Rock and Roll. When the second version of Rock and Roll was released in 1989, I was pretty much out of Joe. I still collected the comic, though, and saw Rock and Roll's appearances there in his new uniform. This fascinated me as I thought the design was just a great update for the character. When I returned to collecting in the '90's, a complete '89 Rock and Roll was one of my first priorities. But, after I got one, it still didn't bring the character into my Joe world on a full time basis. I never really felt that Rock and Roll distinguished himself enough from the original Joes. As such, I never took to the character in a way that would keep him a major player in my collection. With the advent of this figure, though, I can see some of that changing. While the comic pack figures as a whole have been repetitive and dull, some of the remakes have moved into my top tier rotation. As I have enough diversity of color and mold in the figures I use the most, I can absorb a comic figures or two (Clutch being the other who has become important) as they are different enough from the other figures that their mundane colors aren't overused. As Roadblock has fallen a bit in my collection due to the incredible over saturation of his molds, Rock and Roll is poised for a bit of a comeback. This figure is just interesting enough that it could be a welcome addition to my most used Joes.

Overall, I think the comic packs have been a modest success. When taken as a whole, they have more good figures than the TRU exclusive sets have offered, but still have too many misses for them to be considered great. Only now that Hasbro has freed themselves of the constraint of moving chronologically though the comics has some diversity creeped into the releases. The last two waves of comic packs showcased a panorama of new colors that added some much needed life into a medium that was all too green and drab. (Unfortunately, they took a step backwards by releasing Comic Pack #9 as it was just more of the same and wasted a valuable slot by producing a crappy DD comic pack. It should have been scrapped and Cover Girl released on a single card as she is the only figure in the pack that anyone wants or cares about.) My feeling on the comic packs from the beginning was that they were too similar to really take off at retail. And while sales seem to have been decent enough at first, the reality is that the line was heavily clearanced after Christmas of 2004, the Rock and Roll wave of comic packs saw shortened production, the wave succeeding Rock and Roll's was heavily clearanced and unsold Wave 1 comic packs showed up at discount retailers in bulk for 1/2 the retail price. This is not the hallmark of a strong line. I think that had Hasbro skipped around from the beginning and offered a wide selection of figures and characters in each and every wave, it might have been more successful. Parents had little incentive to buy each pack as, from their perspective, the figures in each pack were largely the same. Had their been comics from different eras in each wave, there might have been greater interest among kids and their parents as they would have felt they were getting something different and new with each pack. At this point, though, that's moot anyways.

Right now, this Rock and Roll is somewhat hard to find. He was released during a slow retail period and his entire series of comic packs actually saw a shorter production run than the other waves. As such, going forward, this will be a figure who will be more difficult to find than the other comic pack figures. This isn't to say, though, that he's rare. Most collectors had sufficient opportunities to acquire this figure at retail and were able to do so during his short release window. Some people are currently paying astronomical prices for carded samples of comic packs 6,7 and 8. This is premature as it is still not certain that all overstock has made its way to discount retailers. Plus, the fact that collector demand was mostly sated for this figure and he isn't a sculpt that will have a huge demand for it going forward helps ensure that even the reduced availability won't translate into a high future price tag. I think this figure was a good buy when purchased at retail. He is a more traditional version of Rock and Roll that actually fits in with later figures. That's nice, but he will never be the type of figure who becomes a fan favorite. 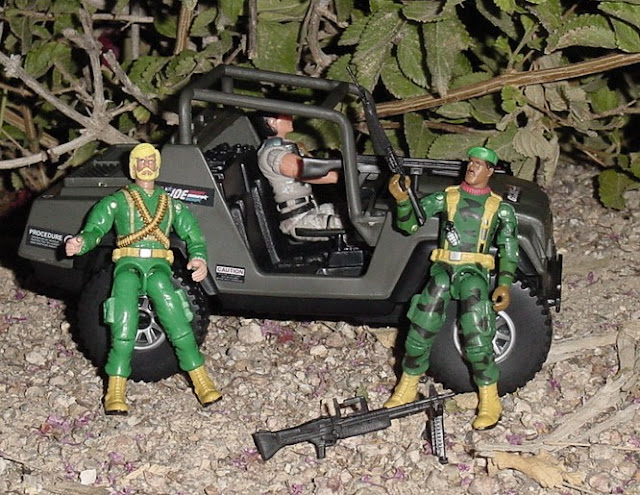 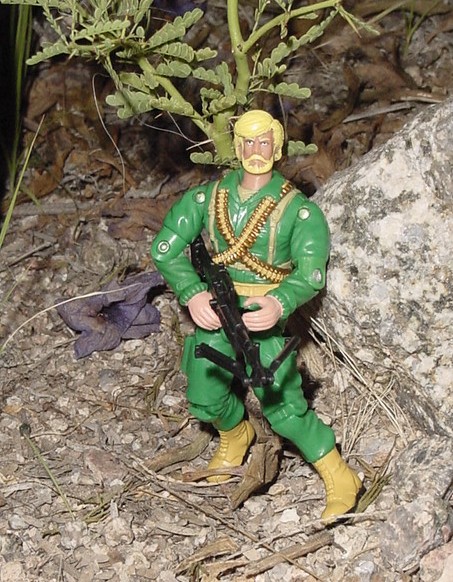 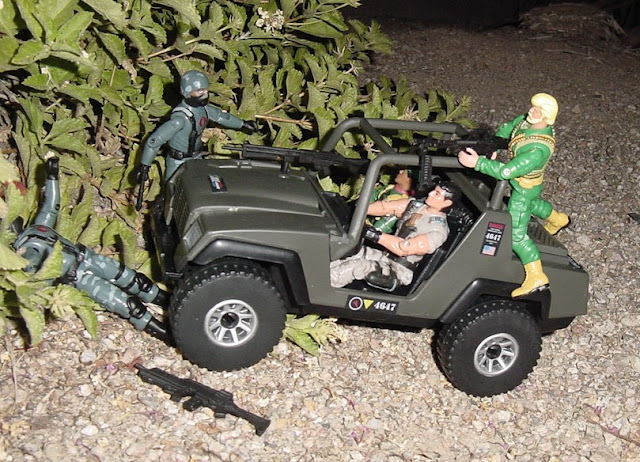 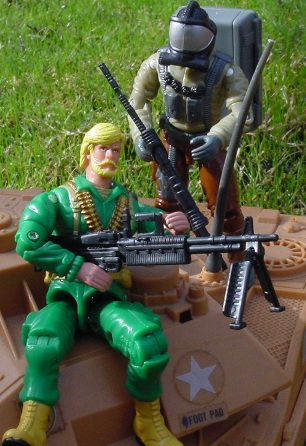 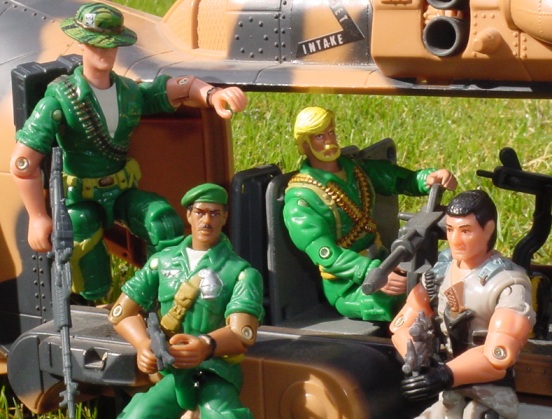 Posted by Robot_Sonic at 10:15 AM
Email ThisBlogThis!Share to TwitterShare to FacebookShare to Pinterest
Labels: 2005, Comic Pack, Rock and Roll