In 2003, collectors were simply sick of Mirage. He had been released 3 times: twice with Vipers that collectors army built to extremes and once with a really crappy hover vehicle. Despite the fact that all three repaints of the mold were well done and were perfect examples of how Hasbro should have approached the retail repaints, the Mirage figures were generally loathed by collectors just because they acquired so many in their army building zeal. A few years removed from this, though, Mirage doesn't have quite the same reputation. Now, he has fallen back into semi-obscurity even though a clear version was released in the Winter Operations set. Collectors have gotten over their overwhelming animosity towards this figure and that has lead me to re-examine his role in my collection. As I finally had a chance to acquire his original version, this visit to the Mirage mold is for the first version of Mirage.

The reality is that this is not the best version of Mirage. In fact, it is only the 4th best version of the figure and that's only because I find it hard to use clear figures. But, as it is the original, it has a significance due to the quality of the mold and the then-unrealized potential of the figure from 1993. The Mirage figure shows a remarkable attention to detail as it features a wide array of molded accouterments that hearken back to the golden years of Joe sculpting. Mirage also features a detailed head mold that is complete with colored goggles that affix to his face. The goggles complement the detailed head gear that is molded onto Mirages head.   The Mega Marines were an interesting subset of figures. They were designed to fight against Cobra genetic "monsters". They all included moldable "bio-armor" that was playdoh that could be stretched over horrid plastic "armor" shells. All the figures in the set were also very bright. They all featured various neon hues of red, yellow, green or blue. The worst part, though, was that they were higher priced at retail due to their included armor. This just added to their pegwarmer status and kept them around gathering dust at retail along with Armor Tech and Shadow Ninja figures.

The figures themselves, though, were actually well done. Each figure had a nicely detailed mold that was just colored wrong. In subsequent years, we have seen repaints of Mirage, Mega Viper, Gung Ho and part of Blast Off. All of these repaints have been light years ahead of the originals and have showcased that these molds can be made into memorable figures with just a sane paint application. I wish Hasbro had taken this approach with more of their ARAH releases. There are still so many well done molds from the line's later years that would be great figures with a decent paint scheme. Instead, they focused on bringing back molds who were done right the first time and revisiting them. In time, this got too repetitive and I think that some of the waning retail interest in the product could be attributed to this lack of ingenuity.

Mirage is an decent figure. In fact, he is about 70% perfect with his base colors of olive and black. Unfortunately, the remaining 30% of the figure was colored bright blue and neon orange. This odd mix of colors doomed the figure. (Though, sadly, Mirage is the best colored of all the Mega Marines figures.) In his time, though, Mirage was somewhat useful. Back in '93, the bar for good Joe figures was actually rather low. While I think that 1993 did produce a wide array of very good figures who stand up against the line as a whole, the sheer number of overall figures produced lead to some real clunkers. These simply overwhelmed the year and left it as being perceived as a terrible year despite the hidden gems. As such, Mirage was one of the more popular Mega Marines figures and did not hang around on the pegs as long as Clutch, Gung Ho or Blast Off.

For years, the Mega Marines were a customizer's favorite. The mix of classic characters, good molds and bad colors lead to many new interpretations of the Mega Marines. Many of these custom pieces showcased the level of detail inherent in all the Mega Marine molds. While more recent years have featured less of this as the part base for customizers has grown and Hasbro has filled many of the character gaps with their vast amount of retail releases, you can still find some customizers who revisit the Mega Marines molds and use their skill to bring out the details that the Hasbro sculptors felt were important but the people who designed the paint masks did not.

While I lament the fact that there weren't more post '00 repaints in the spirit of the '02 Mirages, the sad reality is that collectors really aren't interested in them. One thing I have noted about the Joe collecting community is that we, as a group, do not reward ingenuity and originality in our Joe releases. Since Hasbro brought Joe back in '97, the most popular figures have been the molds of major characters or significant army builders all done in color schemes that are similar to the vintage figure. In the case of a few army builders, collectors have flocked to the newer color schemes, but that was mostly in situations like the Alley Viper where there was no non-neon vintage figure. Yet, even then, collectors lament that the Alley Vipers released were not straight repaints of the V1 figure. Master Collector has been the one outfit that has attempted to create some original figures. Yet, all of their figures with the exception of the Crimson Strike Team have featured waning interest in them after their initial release. It appears to be no coincidence that the lone convention set that has kept collector attention is also the least original in terms of figure mold choice and color scheme. While the Cobra Infantry figures who are slight retools of the vintage mold in almost matching colors are heralded by collectors, a figure like the Nullifier (Who is in the exact colors of the Infantry figures!) who updates a great mold that most collectors don't have in multiples with perfect colors is relatively ignored. It all points to the result that we really only have ourselves to blame for the repetitive releases who feature the same characters, colors and molds over and over again. While this seems to be what the main base of the collecting community has wanted, though, I would suggest that this has been off-putting to the newer, more casual collector and has, over the past half decade, eroded the fan base to the point where they are not a great enough purchasing entity to keep the line afloat at retail.

I have yet to really determine this Mirage's role in my collection. While I use the later Mirage repaints as faceless army builders, that was more due to the fact that I had amassed them in quantity and liked the mold and color schemes so much that I wanted to use more than one of the figures at a time. This version, though, is more unique and really needs to be used as the character of Mirage. While Mirage was intended as a heavy gunner, but I can not see him in that role. I think of him more as a technological foil to Zartan: someone who uses new technologies to hide in plain sight and mimic invisibility as a means of infiltration into enemy territory. Going forward, I may flesh the Mirage character out a bit more. But, for now, he remains one of those figures who doesn't see a lot of use but does get pulled out of his drawer when I stumble across him in a search for another '93 figure.

Mint and complete Mirages are actually somewhat hard to find. The Mega Marines was an unpopular, higher priced subset at the end of the line that was still hanging around retail in 1995. As such, many collectors passed these figures by. With the majority of them going to kids, many Mirages were played with, damaged and suffered lost accessories. Now, a complete with filecard Mirage typically will run you around $11 or so. Some will be more expensive and others can be cheaper. It seems this is one case where overused repaints of the mold actually helped the original release as collectors realized that it was a quality mold and discovered (as they tried to find one) that the original figure is actually tougher to find. Now that there are better versions of the figure available, I find my need for the original Mirage to be diminished. This version is still rather visually interesting, though, and could find a place in various base situations. But, if he's going into the field, this version is put away and some of the 2002 figures will come out. Most collectors are the same way and, these days, you will not often see this version of Mirage being desired for anything more than completion's sake. 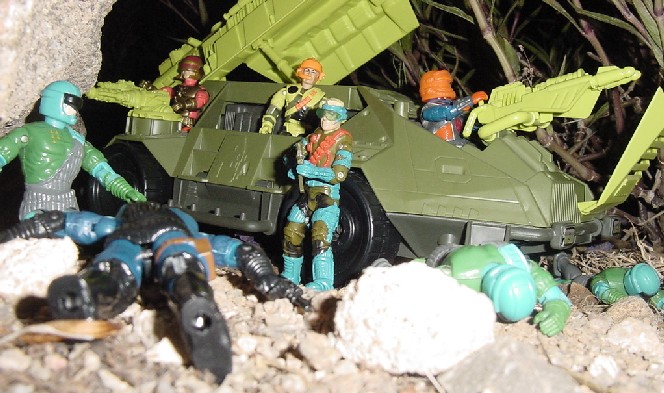 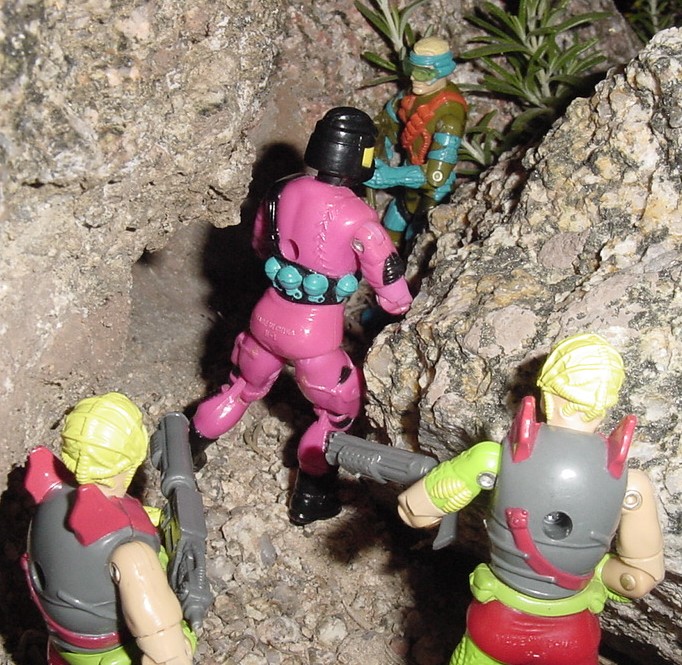 Posted by Robot_Sonic at 10:15 AM
Email ThisBlogThis!Share to TwitterShare to FacebookShare to Pinterest
Labels: 1993, Mega Marines, Mirage