Destro is, arguably, the most complex character in the Joe world. While Snake Eyes and Cobra Commander both have their issues, Destro was always portrayed as being stuck in a morally ambiguous morass: unable to allow his penchant for evil to be overridden by his honor nor able to allow his desire to be good to be overruled by his inbred greed. The conflict created a character that most collectors have latched on to and enjoyed since his first appearance in 1983. Through the years there have been classic Destro figures, great Destro figures, bizarre Destro figures and terrible Destro figures. Unfortunately, this version falls closer to the terrible category than most. But, he also fits squarely in the bizarre. As such, I felt the 1997 version of Destro was worth profiling.

In December of 1992 I went to a Toys R Us during my lunch hour. I checked over the Joe section for the first time in 2 years and was amazed at what I found. I bought a few new figures that day but was most excited about my new Destro. I had long liked the Destro character and the chance to get a new figure of him that was in the classic colors (I didn't much care for the gold Iron Grenadier look at the time.) was too much to pass up. I bought the figure, opened him up and started to realize that, while nice in the sense that the character had a new look, the mold had certain limitations that really knocked it down a few notches from my initial impression.

While this mold has some nice features, it is also overly stylized for most collector's tastes. It features an incredibly high collar, an ostentatious necklace and shoulder and knee pads that make the figure look like parts of his outfit came from the wardrobe trucks of the worst Medieval genre movie in Hollywood. The entire figure is bulky...except for the head. As such, Destro looks like a cartoon character whose body is blown up to be out of proportion with the head. For a guy who wears a steel mask, that doesn't quite work and really takes away from the entire figure. The head, though, is decent enough and can be used on other bodies to build more creative Destro figures. As parts, the mold works much better than it does as a whole.

When collectors think of Destro, they usually think of the V1 mold followed by the version 2. These are the 2 distinctly classic looks of Destro. This mold originally was used to pay homage to the V1 and mark Destro's return into the Cobra fold. In my collection, I tend to use this coloration of the mold just for the fact that it is so distinctly different from his other incarnations. However, even that use is limited. These days, I see Destro as mostly retired from active combat duty. Instead, he remains a political force within Cobra. Being too controversial to ever lead Cobra, Destro, instead, makes his mark as a senior advisor to just about all of the Cobra hierarchy. While he will help out the current Cobra Commander, he spends most of his efforts helping the younger generals who are in charge of South American operations. In this advisory role, Destro has become an icon to the next generation of Cobra and has probably secured a legacy within the organization that is greater than that of the original Commander.

And now we come to the most interesting part of this figure's history: the Pimp Daddy version. In 1997, Hasbro originally painted this Destro in leopard spots. This figure was actually photographed for a Toys R Us advertisement and has lead many collectors to have "Rocket Firing Fett Syndrome" where they swear they saw the Pimp Daddy Version at retail. It is highly unlikely that any PDD's were released at retail in the US. The only carded samples that exist have come from Asia. But, some were carded. The fact that only a few of the PDD's have shown up, though, suggests they were not mass released. While most collectors would be astounded at the number of PDD's that were produced, it is still a small number in comparison with regular release retail or even convention figures. The mystique of the PDD, though, is such that is has become the most famous unreleased Joe figure and that has lead it to price points that are probably unrealistic were the true production numbers known by the general collecting base. As such, I keep my eyes open for PDD's as they do show up for very nice prices from time to time. You just have to be ready to pounce when they do.

After 1997, this mold was used again in 2001 and 2005. Also, in 2005, the head was plated in gold and used for the convention Destro. None of the body releases have done anything to really elevate the mold in collector eyes. The more versions of it that are released, the more collectors realize the limitations of the mold. While, in 1992, this was a decent update to Destro, by 2006, collectors are left wanting more when they know there were better Destro molds available that Hasbro could have chosen for release over this version. This figure, though, does feature decent colors. He is one of the few version of Destro where the good laird is decent enough to cover his bare chest. That alone makes the figure worth owning. The deep maroon hues set against the black highlights make the figure more imposing than other colorations of this mold. The crowning achievement, though, is the chromed head. This was the first time this mold was released with a head that wasn't painted and the bright, shiny chrome sets the figure apart. (Though, most collectors agree that the head is vastly undersized for the body.) The overall effect achieved with this figure is a nice update to Destro's classic look. You know this is Destro the second you lay your eyes on him. For a character who is as visually powerful as Destro, that is a hallmark of some success.

In 1997, this figure was a HUGE pegwarmer along with the rest of the Joes. By 2001 and 2002, though, collectors had forgotten this and mint, complete versions of Destro were fetching close to $20 on the second hand market. Now, though, demand for the figure has sated and they can be routinely purchased in the $7-$10 range. At that price, the figure is worth owning just for the chromed head and non-traditional coloring. When I'm looking for a different take on the Destro character, this if the figure I use. That is rare, though, so this isn't a figure that's become vital to my collection. I think that is doomed to be his fate. Collectors will get one of these but I think the heyday of this figure has passed. That's not really a bad thing, though, as most of the subsequent Destro releases have surpassed this one. Those that haven't, though, are real stinkers. For me, this will remain my odd Destro for when I want to add depth to a dio. Other than that, though, he isn't a figure who holds great importance in my collection. 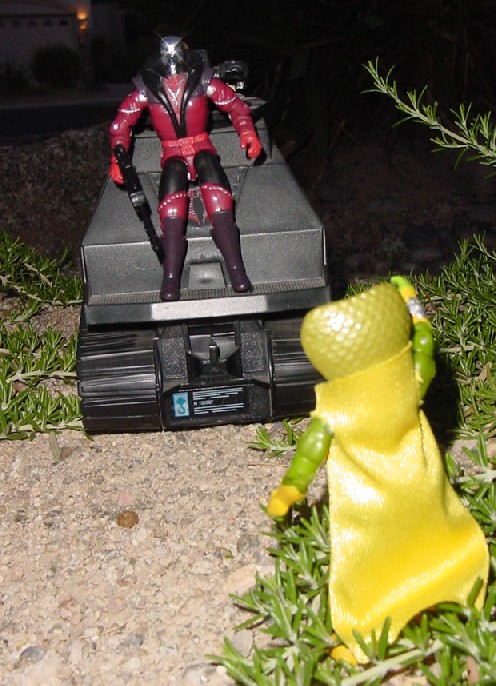