The G.I. Joe line was originally conceived as a series of vehicles.  They were high profit toys for Hasbro.  However, the figures that were designed to interact with those vehicles turned out to be massively popular.  But, the vehicles remained a vital part of the line's overall profitability.  As the line progressed, the scale and audacity of the vehicles grew as well.  Each year, Hasbro was able to produce vehicles that outdid the year before.  In 1985, though, the bar was raised as high as it could go.  Along with the excellent Moray and Mauler, Hasbro pumped out the unprecedented USS Flagg.  The 7 1/2 foot behemoth remains the flagship for the Joe line: both literally and figuratively.  Lost in between massive carrier and the amazing higher end vehicles, though, is the Transportable Tactical Battle Platform.  Despite its lack of an included figure, the TTBP (for short) is on par with Hasbro's other releases and is an excellent example of the overall vehicle quality that dominated the Joe line.

My younger brother got the TTBP for his birthday in October of 1985.  Unfortunately, the one he got had a production defect where the control room windshield was warped and didn't fit into the base.  This heavily colored the toy for me since it was frustrating to not have a cool feature like the window be available.  So, I didn't really pay the TTBP much mind.  Of course, I had my recently purchased Mauler and hope of a Christmas USS Flagg (that never materialized) to divert my attention.  One of my best friends, though, loved the TTBP.  Whenever I'd go to his house, he'd pick it first and have it be the focal point of his play.  He had his mom get him longer string and kept it on a small table.  The longer string could reach all the way to the floor and he'd use this as the means of making his base impenetrable.  I finally starting bringing my JUMP pack over so I'd have a way of attacking him other than the Skystriker, Rattler or Dragonfly.  (At his house, it wasn't Joe Vs. Cobra, it was me vs. him with each of our armies.)  But, that was about the extent of my interaction with the TTBP.

In late 1986, the TTBP finally found a calling.  Having given up my dreams of a Flagg, I looked to other options for an aircraft carrier.  So, I used my bed.  I set up the 1983 HQ at one end and put the TTBP at the corner of the other end.  The HQ was the ship's bridge and command center.  The TTBP was the air traffic control who launched the fighters and spotted approaching Cobras.  This made the TTBP the action center when it was time to fight.  Cobra would attempt to destroy it first, so the Joes couldn't launch any more aircraft.  Usually, the TTBP would last for a while: its missiles taking out the first few Night Ravens or Rattlers.  But, eventually, Cobra would take it out.  Once that happened, the battle turned into a sea fight with Hydrofoils and Hovercrafts while the ground crew on the ship tried to sort out the carnage while also trying to fend off boarding Eels.  Some of these battles were so elaborately set up that I'd sleep in my parent's guest room for a few days so I didn't have to move all the toys each night.

This scenario, though, was a recurring theme throughout 1987 and continued as a key plot point until my final days of playing with toys.  Having a massive command ship opened up large opportunities for play.  In that regard, the TTBP held its own.  The bridge, helipad and mounted gun and missile launcher offered a myriad of different stories.  If the missiles shot down the Cobra aircraft too soon in the battle, the next attack would be differently formulated to avoid this problem.  It allowed for an ever escalating conflict to remain fresh.  And, with large surface area of the "ship", I was able to combine sea, air and land vehicles into one battle.  This was perfect as it allowed me to use all of my toys and keep my favorites in the mix, even when it wouldn't, on the surface, appear that a Mauler tank would be all that useful at sea.

The TTBP has a few key elements to the design.  It's set up so there are multiple play areas that can either act alone or in concert with each other.  The primary point is the command center.  This is a large, open pit with a control room piece that surrounds the space.  Inside is a mounted spotlight and the whole area is enclosed by a windshield.  There is just a single seat.  But, there's lots of other space to pose figures around the controls or in command.  It has an opening to a tunnel that connects the command center to the cargo area.  It's nicely tucked along the back of the toy and is a somewhat forgotten feature of the TTBP.

The cargo area is another wide open space that allows for lots of figures.  The keystone is a crane.  It has a winch with rope and hook from the Dragonfly.  It has a small ladder to allow characters to climb in and out of the depressed pit.  The lowered floor allows for figure posting around the edges.  There's some small details on the floor.  But, in general, the space is open and uncluttered.  You can easily store some of the mundane pieces of the Joe line like weapon crates, gas cans and other battlefield necessities in the space.  It's something that's overly practical on a base like this, even if it doesn't seem like much fun out of the box.  (Oh, and as Jeremy reminded me in the comments, there is also a 5 weapon rack that fits across the outer wall.  Included with the TTBP were slightly differently colored versions of Stalker's M-32, Grunt's M-16, Snow Job's XMLR, Airborne's XM-16 and a very differently colored version of Ripcord's SLR-W1L1 rifle.   The weapons were attached to a tree and slightly lighter in color than the versions packed with the figures.  It's a great additional detail that adds some more play value to the cargo area.)

Between the command center and cargo area is a helipad.  It is accessible by a small ladder.  (The entire playset uses ladders to great effect as they don't take up much real estate and provide great realism.)  The helipad can hold either a Dragonfly or a Skyhawk, depending upon your preference.  You could also set a JUMP platform up there.  Thought that's overly redundant.  You will notice small hooks on the dec.  In the comic, two Dragonflies attached their hooks to these and carried the TTBP out to sea.  As a kid, I re-enacted that scene with two Dragonflies.  It actually held for a while and I could the whole thing.  But, eventually, one of the hooks gave way and snapped under the weight.  So, they aren't overly useful bits, but are kind of fun to remember from the TTBP's introduction in the comic.

Across the front the TTBP are three main details: a gun turret, missile stand and ramp.  The ramp is somewhat interesting.  The slot for it is about the exact size of the 1985 Armadillo vehicle and it's a perfect piece to combine with the ramp for extra defenses.  The missile launcher uses slightly recolored versions of the missiles that were available on the Skystriker.  The Skystriker missiles are darker and you often see TTBP missiles sold on complete Skystrikers.  So, that's something to watch for.  The gun is massive and can shoot up in the air or straight.  Not being able to point down is a bit of a letdown.  But, it's still cool to see a gun station on a Joe base.  Each weapon sits on a small platform and has a hatch that is covered with a tab.  You can remove it to see additional mechanical details.

The overriding theme of the TTBP is space.  There's lot of open area to display figures.  In that regard, it's an excellent toy.  You can showcase pretty much an entire year's worth of figures without being overly cramped.  For something with a small footprint, that's a real rarity.  And, adding in the fact you could also showcase a Dragonfly and Armadillo on it, it has a full range of possibility.  As such, you often see TTBP's as showcase items in many collections.  They aren't there to show off the possession of a TTBP: like you see with both the Flagg and Terrordrome.  They are a clean way to show off a collector's favorite Joes while being able to use a fun playset.

The TTBP is slightly reminiscent of a Maunsell Fort from World War II.  There are pictures of samples that are in colors similar to the TTBP's.  The notion of a water fortress has been ingrained in man since early warfare.  So, getting something like this in the Joe line was just another example of how the early designers were tuned into real military concepts.

The TTBP was only ever released by Hasbro.  It saw production in American, European, Canadian and Japanese packaging.  But, all the toys were made from the same facilities.  It was never exported out of the Hasbro family.  In 1995, Hasbro planned to repaint the TTBP and release it as the Battle Station.  It appears this would have been an Arctic themed release that was mostly white.  So, not all that much different from the original release.  But, it would have included a couple of figures: Snow Serpent and Big Ben.  Had it been released, I probably would have bought it just to get the two figures.  But, it would have been cool to see another take on this mold.

Transportable Tactical Battle Platforms have lots of small pieces that are easily lost and broken.  On top of that, you have a windshield that tends to yellow.  And, the base itself is easily discolored white plastic.  As such, truly mint and complete TTBPs are pricey.  Usually, they'll run between $60 and $80 depending on the number in the market and the brilliance of the white base.  You can get them a lot cheaper if you sacrifice a few pieces or are fine with some discoloration of the plastic.  There are some spectacular custom TTBPs out there made from discolored parts.

As a playset, the TTBP is tough to beat.  It can display a lot of figures, and even hold a vehicle or two.  It can use the storage footprint to offset other toys and becomes a relative bargain as a display piece in terms of space used.  Plus, it's a great way to incorporate figures from across G.I. Joe generations since many different figures integrate well with the design.  In short, it's one of those toys that pretty much every collector has: but none really love.  It's awesome to own.  But, once you have your setup complete, there's no real reason to come back.  Other, more popular vehicles of the vintage era are returned to by collectors time and time again due to their complexity and general spectacular design.  The TTBP is kind of like an Alpine or Footloose figure.  They are rarely anyone's favorite.  But everyone has them because they are great toys.  They are just eclipsed by other figures from their time that were better.  That's the TTBP's fate.  But, that's OK since that will keep something that's attainable and useful for pretty much everyone. 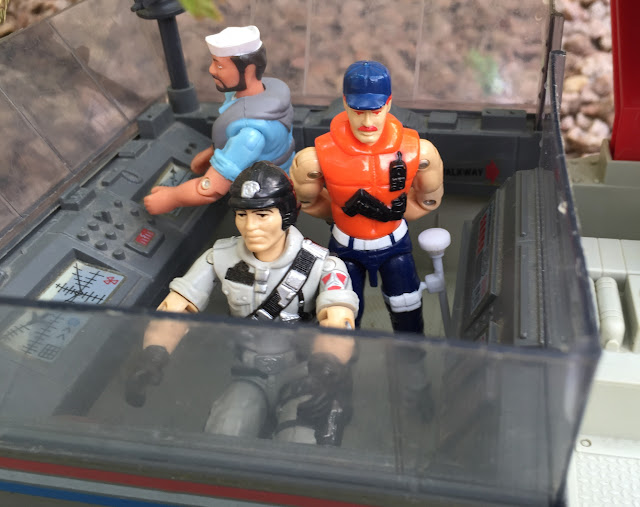 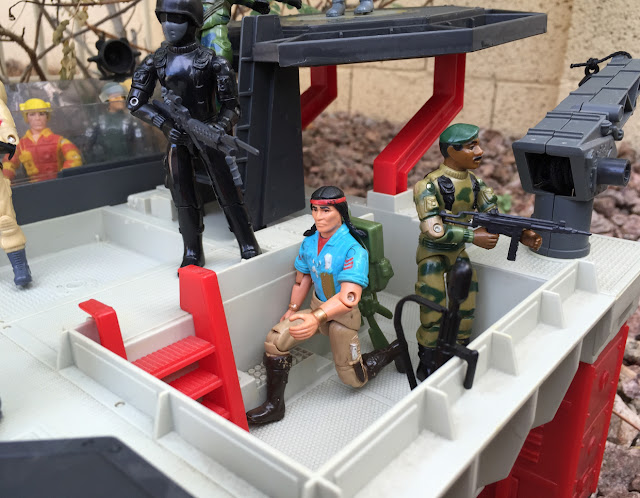 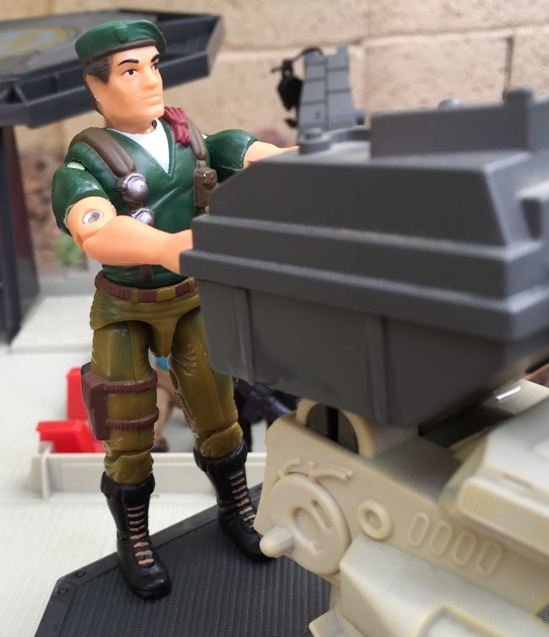 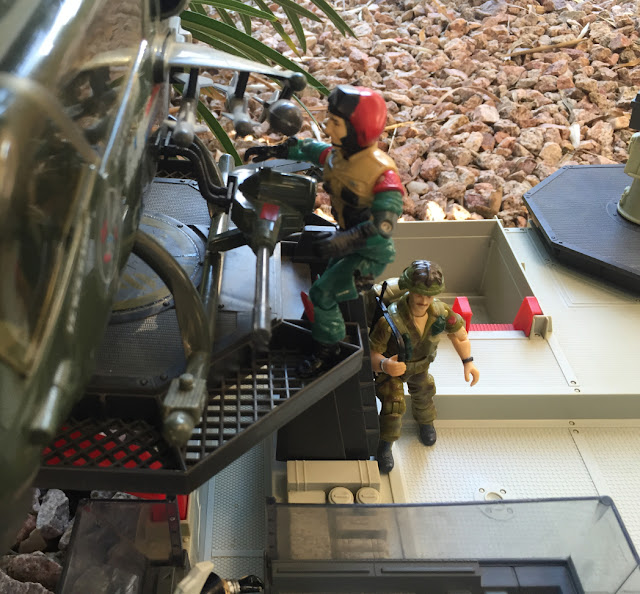 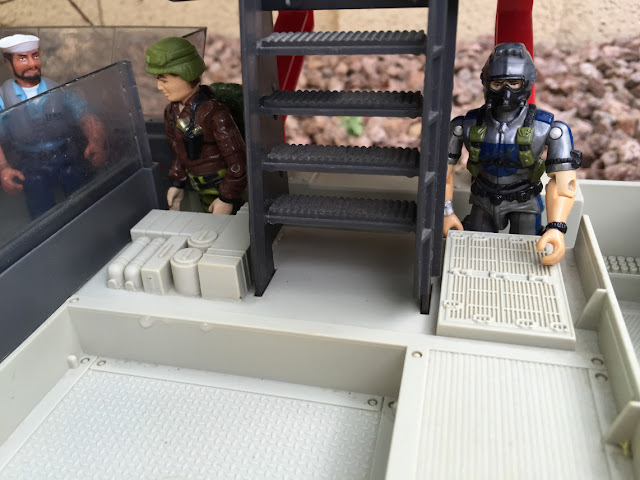 Posted by Robot_Sonic at 2:18 AM
Email ThisBlogThis!Share to TwitterShare to FacebookShare to Pinterest
Labels: 1985, Tactical Battle Platform, Vehicles