I remain a Star Brigade junkie.  I enjoy the subset and find the figures from both 1993 and 1994 to be extremely well done.  I freely admit that the notion of all astronaut sub team that, in the end, was fighting aliens is pretty far off the edge of acceptable G.I. Joe mythos.  But, that doesn't take away from the overall quality of the figures released in the series.  The reality is that the Star Brigade figures are extremely high quality and feature some great colors and molds and were a great bookend to the vintage line.  Of the figures in the 1994 Star Brigade series, it is the Countdown figure that features my favorite color palette.

As a character, Countdown was not the first Joe astronaut figure.  But, he was the first to be released in the carded retail line.  (Though the Cobra Astro Viper was released the year prior.)  As such, Countdown was actually designed as an astronaut mold.  The remaining repaints in this series are all from other purposes, originally.  This gives the mold some authenticity.  The body features intricate details that fit with the astronaut theme.  The helmet, though, is the greatest asset of the figure.  The helmet fits snugly over the figure's head and melds perfectly with the body.  It looks like an astronaut helmet and matches the look for the figure.  Countdown has some weapons (which I assume would be used inside space stations or in the atmosphere) molded to his chest.  This version, though, lacks the backpack from the original figure.  The result is a helmeted figure with no life support systems.  The upside is that 1989 Countdowns are cheap and it's easy to get extra packs to outfit this figure.  But, it's a glaring omission that plagued most of the Star Brigade figures.

I found the 1993 Star Brigade figures at a toy liquidator in 1995.  I enjoyed the hodge podge of blues, reds, whites and greens that comprised the 1993 series.  I did not learn of the 1994 series until much later.  As soon as I saw the more muted colors of the 1994 Star Brigade series, I was hooked and had to have them.  I began a search for any and all 1994 Star Brigade figures.  At the time, it was fairly easy to find the Lunartix aliens on the second hand market.  They were expensive, but available.  The remaining figures, though, were very difficult to find.  Over time, I was able to track down carded versions of the complete 1994 Star Brigade series except for Countdown and Ozone.   Those two figures just never appeared for sale.  Finally, in very early 1999, I found a lot with multiples of each. I staked it out and was finally able to add Countdown to my collection.

I immediately opened the carded version as there was no way I could not have a loose version of the grey, green and blue Countdown figure.  This version was easily the best version of Countdown ever released.  Quickly, this figure became the replacement for the 1993 Countdown who was one of the main pilot figures in my collection.  He looked good in the Skystriker, but did not fit in the Skyhawk.  As I did not have a Defiant, though, my uses for Countdown were somewhat limited.  I wanted the figure to be more prominent.  But, it was difficult to find many of the few aircraft I had in my collection that would both fit the figure and display him appropriately.

The second series of Star Brigade was extremely limited in production.  It was estimated that only around 10,000 of each Lunartix alien figure was produced.  The humans in the series were produced in equal numbers.  So, Countdown, Ozone and Effects join Lobotomaxx, Predacon,  Carcass, Gears and the V2 Techno Viper as some of the rarest figures in the vintage line.  That doesn't mean you can't find them.  But, even today, it is much easier to track these figures down still carded than it is to find them loose.  By the time the 2nd series of Star Brigade was released, many collectors and dealers were in the market for them.  That kept the carded figures easily available in the collector market while loose figures have mostly come from collectors like me who opened carded figures acquired on the secondary market.

The Countdown mold has a decent history.  It was released in 1989, 1993 and then in 1994.  Around 1999 or 2000, the mold appeared in India where it was released by Funskool.  The Funskool version is similar to the 1993 Countdown, but has some unique elements.  (It should be noted that Funskool was still releasing Countdown as late as 2009.)  Overall, there are 3 basic incarnations of Countdown, but each is very well done and is different enough from the others that the mold has some nice diversity.  The V1 and V3 figures are both excellent visual representations of the character.  The V2 offers some different colors that still work very well.  Even if Hasbro had the mold back (though that is unlikely) there isn't much that could be done with the mold that would surpass the figures that have already been released.

These days, the 1994 Star Brigade figures are actually somewhat desirable among collectors.  This has lead to higher prices than we've ever seen for carded and loose samples of the figures.  The most highly sought after figures remain Roadblock, Blackstar and Space Shot.  But, figures like this Countdown are starting to get their due.  Collectors have realized that Countdown is among the rarest figures ever released in the line, is actually a great color scheme and is worth owning.  As such, you can expect to pay upwards of $12-$15 for a mint, loose, complete version and maybe $25 for a carded sample.  In the grand scheme of things, that's still pretty cheap.  But, when you consider that about a decade ago, you could carded samples for under $3 each, you're talking quite an increase.  For my money, this figure is worth it.  The colors are excellent and really add something interesting to any collection. 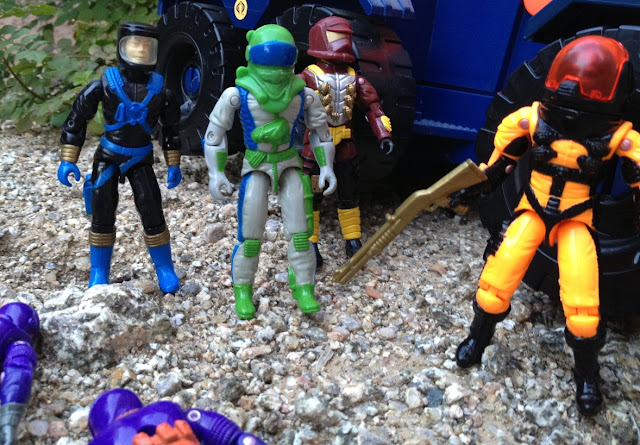 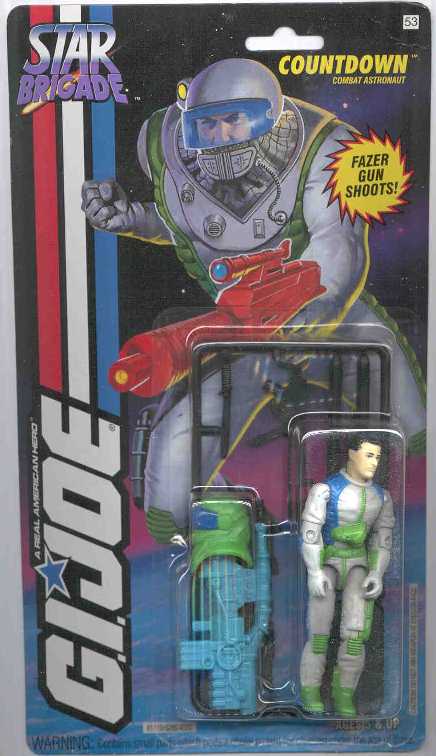