In 1995, I was buying pretty much every Joe toy I could find.  Over the summer, I had spent many lunch breaks scouring various retail stores to purchase just about every figure and vehicle I could find.  As the calendar wound into fall, I headed off to my senior year of college.  Back in my college town with no automobile, my inventory of stores to search for Joes was limited to Big Lots and Wal Mart.  In September, I was shocked to find a rack of 1993 Joes at Big Lots for the outstanding price of $2.00 each.  I only had a few dollars on me at the time and just bought two figures.  When I returned to the store a week later, the entire stock had sold out.  I pretty much resigned myself to not finding anything else to buy until I went home for Christmas.  However, in October, I was buying groceries at the local Kroger and wandered down the promotional aisle.  There, atop a shelf was a Cobra vehicle I had never seen before: the Parasite.

At the time, things like the Internet were nascent.  So, there were few ways for someone like me who had been out of Joe to really establish a timeline of when certain figures and vehicles were released.  Through my purchases in 1994 and 1995, I was able to track down catalogs from 1993 and 1994.  This helped me date some of the figures and vehicles I was finding at the time.  As the Parasite was not featured in any of the catalogs I had and since the artwork featured the 1992 Destro (who I had purchased in 1992 so I knew the date of his release), I figured it must be an earlier release.  I hoped it would contain a 1992 catalog that would help me piece together more of the puzzle that was the final years of Joe to me.  But, I wasn't about to go buying a G.I. Joe toy at Kroger, in a college town, in the middle of the day.  Sure, an adult buying toys now is commonplace.  But, in 1995, it was still a bit odd for someone who was too old for toys but too young to have a child of the proper age to be buying toys.

So, I left the Parasite that day.  I figured I would find a time when I was at the store late at night (it was a 24 hour store) and purchase it then.  But, as the Kroger was about as far from my house as possible and I didn't have a car, it was a few weeks before an opportunity presented itself.  Finally, late one night, my room mate needed something from the grocery.  We headed off to Kroger around midnight.  The store was empty.  So, I took advantage of the vacant aisles and pulled down the Parasite.  The grizzled towny cashier looked at me a bit funny when I took it through checkout.  But, that was the extent of the hassle I got.  I took the Parasite home, opened it up and found the incredibly disappointing 1992 catalog inside.  While this helped me piece together more of the Joe figures I would need to acquire, it did not give me the great pictures of the figures I had hoped for.  It was mostly the same artwork that I had already seen on the few cardbacks I had available to me.  This disappointment, though, was somewhat tempered by the quality of the vehicle I had just opened.  The Parasite was actually surprisingly better than I had anticipated.

On it's face, the Parasite did not match up with my collecting goals of the time.  I generally didn't buy vehicles unless they met the following criteria:

1.  They included a figure.
2.  They were decently colored and fit with my collection.
3.  The vehicle design was something I simply had to add to my collection.

The Parasite did not match 1 or 2.  I was not sure on number 3.  On the box, the vehicle looked a bit odd and blocky.  But, for the price and my desire for the catalog, I was willing to reconsider my criteria.  When I had the vehicle in hand, the most glaring aspect is the outlandish orange and purple coloring.  Once I got past this, though, I found the Parasite to contain a remarkable level of detail and play features.  In short, I had some great potential.

The Parasite is armed to the teeth.  The front gun station features 4 guns focused on the ground to take out any infantry.  It also has a mounted four barrel weapon array that is capable of elevating to take out low flying aircraft or just to elevate to take out troops on higher ground.  This entire weapon system rotates to protect the vehicle from a rather large angle.  If this isn't enough, there is a mounted Gatling cannon on the vehicle's back that protects the rear but also can cover the sides of the vehicle.  Finally, the Parasite features a set of mines.  These are stored on the vehicle's side.  The true play feature of the Parasite is that the mines can be launched from the spring loaded catapult on top of the rear door.  It is somewhat intrusive to the design.  But, it does give the Parasite an impressive amount of weaponry.

From a troop transport perspective, the Parasite can carry six figures in the cargo hold.  There are seats large enough for figures from the '90's.  It holds one driver and can carry a large amount of additional figures on the footpegs on the side rails and rear.  This gives the Parasite a larger footprint than vehicles like the Hiss Tank.  The extended front guns and wheels that jut out from the main body make the vehicle appear larger than it is.  But, fully loaded with a complement of 15 figures, it is an impressive sight.

One of the knocks on the Parasite is the open driver's cockpit on the front of the vehicle.  You have an armored troop transport to move highly valuable Cobra Troops around the battlefield, but you leave the driver of the vehicle dangerously exposed to fire from any weapon.  While this is a realistic detriment to the vehicle, it is in line with Cobra vehicles from prior years.  The classic Hiss puts the driver front a center, though he is encased with a canopy.  The STUN, though, does not.  Motor Vipers atop a STUN are not only susceptible to any fire, but the design of the STUN's front gun pods would actually deflect a lot of bullets directly up towards the driver.  So, in design, the Parasite's driver protection is actually a step above the STUN's.  However, I have long incorporated this exposed driver as part of the Cobra lore.  Cobra likes fearless drivers.  In order to temper them a bit and prevent total recklessness, Cobra leaves the drivers exposed.  This causes them to be more cautious.  Sure, it's a stretch to incorporate major design flaws into the toys.  But, those exposed drivers have a lot more play value than protected drivers like you find in the Mauler or Mean Dog.  So, you kind of go with it.

My general feelings on the repaint era from 2000 through 2006 is that Hasbro missed the boat with what they could do.  The spent far too much time trying to give us the classics either in different colors or in colors generally similar to the vintage release.  The result is a convoy of forgettable vehicles with a few gems interspersed.  I would have much rather seen Hasbro look to vehicles like the Parasite.  Later year vehicles with solid molds but that suffered from terrible colors the first time around.  The Parasite redone in black and grey, black and crimson or Cobra blue and black would have been an excellent update to the Cobra armory.  Instead, Cobra got multiple repaints of the original Hiss Tank and little else.

As much as I want to blame Hasbro, though, I really can't.  In 2004, Hasbro tried something different when they repainted the 1993 Monster Blaster APC as the BAT Transport.  The Monster Blaster was another late year vintage vehicle that had a solid mold.  In this case, the vintage colors weren't even that bad.  But, the mold, while high quality, is very sci-fi in appearance and isn't for every collector.  And, sales played that out.  Even at the height of the army building craze, this repainted BAT Transport that included 3 unique army-building BAT figures did not sell anywhere near as well as the repainted Version I Hiss Tank in Operation Crimson Sabotage.  Collectors did not tend to reward ingenuity at that time.  So, Hasbro using an unheralded late year vehicle and repainting it in decent colors was nowhere near as popular as repainted a classic vehicle in a color that was already available in the vintage line (albeit expensive).  So, the chance for something like the Parasite to be revisited never materialized since there really wasn't a market for it.

Today, Parasite's are rather inexpensive.  They are not desired by collectors and don't really show up except when someone is after one for completion's sake.  A few customizers have discovered the mold and repainted the vehicle into something much more exciting.  But, you would expect the Parasite to be a customizer staple since it can provide such a valuable role to a Cobra army.  For whatever reason, it is not.  Generally, seeing even nicely customized versions is a rarity.  That leaves the Parasite as a hidden value for new collectors.  They are cheap enough to paint into something different.  But, if that's not something you do, the mold still has some value.  The oddly colored '90's Cobras do look at home in the Parasite.  So, it's worth acquiring for that alone.  Personally, I doubt I would have this vehicle had I not bought it in 1995.  But, I did and have not regretted it.  For the small financial outlay a Parasite will cost, I think most modern collectors would find their feeling about the Parasite to be the same. 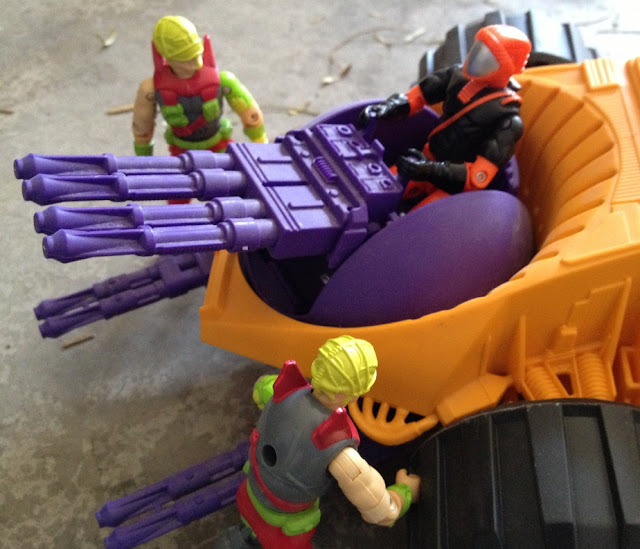 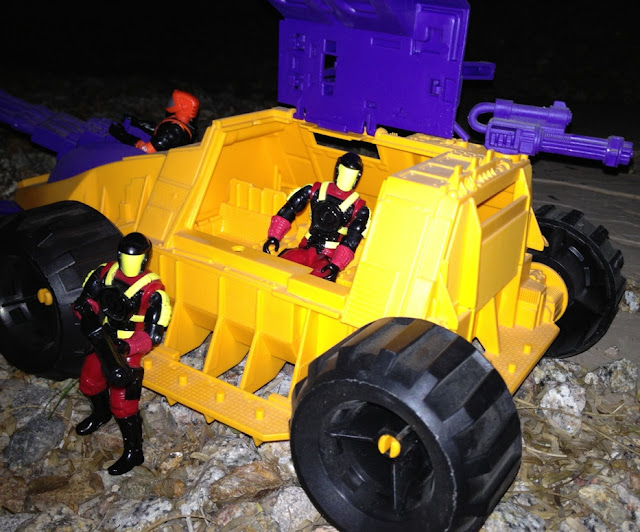 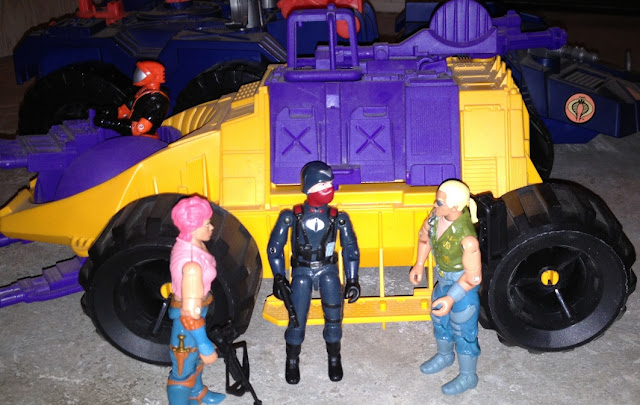 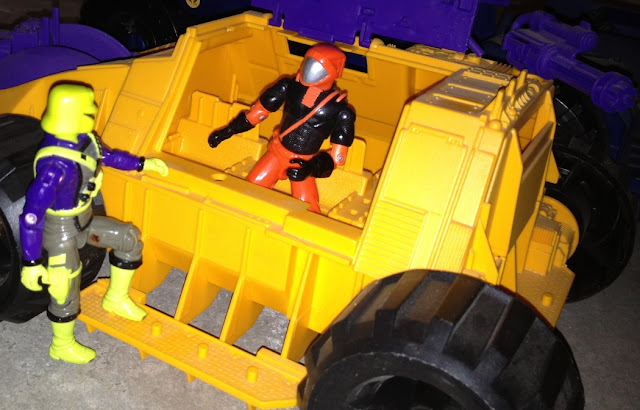 Posted by Robot_Sonic at 3:09 PM
Email ThisBlogThis!Share to TwitterShare to FacebookShare to Pinterest
Labels: 1992, Parasite, Vehicles