By 1985, G.I. Joe had become extremely popular.  Toy stores were packed with entire aisles of Joe toys.  Hasbro tried to capitalize on Joe's notoriety by producing ancillary products to their main Joe line.  These included lunch boxes, stickers, pencils, napkins, etc.  As time progressed, they got a bit ambitious in their undertakings.  One such project was the Listen & Fun Tripwire.  Not part of the main Joe line, the Listen & Fun Tripwire was packaged with a cassette tape and sold for a higher price point.  The result is an unflattering repaint of an obscure mold that is rather difficult to find.

The Listen & Fun notion probably looked good on paper.  Hasbro could cheaply record a lame spoken word Joe adventure, feature the character with whom the tape would be sold and bundle it into a higher price point item that would, potentially, expand Joe's audience.  The reality was that they created a figure that was sold at a much higher price point than their traditional figures with a feature that wasn't all that compelling.  Throw in the fact that the figure was colored bright orange in an era of realistically colored figures and you see the disaster that was the figure.

In the late '70's and early '80's, recorded adventures were big sellers to kids.  Most properties put out records and, later, tapes that featured popular kids characters.  I distinctly remember having original G.I. Joe Adventure Team .45's and wondering why none of the Joe characters I knew were part of the stories.  I listened to them on a record player for kids in the basement.  I had some Disney and Star Wars records as well.  In short order, though, these things became passe.  The cassette players of the '80's ushered in a new era of recordings.  Hasbro tried this Listen and Fun idea and included a cassette with the Mission to Brazil set in 1986.  But, this was the end of the cassette tapes with Joes.  By 1991, Hasbro had advanced to video taped, animated adventures with figures.

I have few recollections of seeing the Listen and Fun Tripwire in 1985.  Were he heavily featured, I'm sure I would have eventually caved and asked my parents for him as I was inclined to buy any Joe figure I did not own, no matter how oddly colored.  I do recall seeing the figures hanging by the checkout counter at the local KB toy store.  They were not stocked with the Joes, but hanging on pegs high above the cashier.  I'm sure I saw the figures other times, but that memory of KB sticks out in my mind.

When I returned to Joe collecting, I maintained the memory of seeing that Tripwire at KB.  I sought out others who recalled the orange Tripwire, but found few local collectors who did.  When I found the figure in the early days of online Joedom, I was quickly reminded of how poorly colored this selection was.  While I didn't mind the neon colors of the '90's, those were largely contextual.  Neon was big in the '90's so having toys in those colors matched the time period.  That was less so for the Listen and Fun Tripwire.  The figure is so out of character with the other releases of his time that he stands too far apart from Joes of his era.  Had he been a '90's repaint, I think I could better accept him.  But, an orange and red figure who wasn't a flamethrower made no sense in 1985.

As a figure, this Tripwire is pretty terrible.  He is based in bright orange with deep red highlights.  He has his silver goggles and insignia along with Copper trimmings.  In all, he is so bright that the details of the mold are largely lost.  The figure did include the full complement of Tripwire accessories, though.  Recolored in a light grey, the original Tripwire minesweeper, pack and mines are a nice addition to this figure.  But, they also add a degree of rarity to it as the mines were easy to lose in their own right.  Some collectors consider the tape to be part of a complete figure.  Others do not.  It is really up to the individual if the tape is necessary.

As a figure and character, Tripwire never played much part in my collection.  In 1983, Tripwire and Torpedo were the last carded figures we found at retail.  As such, my younger brother acquired our first Tripwire in the fall, right as I acquired my first Dragonfly.  This somewhat tied the two together.  But, Tripwire's lack of a firearm quickly doomed him to second tier duty.  Add in the fact that his crotch broke rather quickly and you understand how Tripwire never made much of an impact on my childhood play patterns.  In the mid 1990's, though, Tripwire made a bit of a comeback, though in a different capacity.  At the time, I had few Joe figures available to me.  But, I had two Tripwires, both with no accessories and broken crotches.  I pressed these figures into duty as nameless Joe vehicle drivers charged with driving APC's into hostile territories.  Often, they would end up as cannon fodder as the vehicles were attacked.  But, the non-descript head and identity stealing goggles allowed the figure to fill this role.  In time, though, Tripwire morphed back into the original character and has been pretty much a display piece ever since.

The Tripwire mold was well worn.  The original figure was released in the U.S., Europe, China and Japan.  Over time, the rank insignia paint mask on Tripwire's arm changed.  In addition to the 1985 Listen & Fun figure, Hasbro also repainted the mold in Tiger Force colors in 1988.  In 2001, Hasbro brought Tripwire back in the ARAHC series with a militaristic paint job that was reminiscent of the original figure.  But, they then sent the mold off to India.  In 2003, Funskool produced a purple and orange Tripwire figure, only with a new mine sweeper accessory.  The result is that there are great Tripwire figures, odd Tripwire figures and bad Tripwire figures.  For such a minor character, there are likely more than enough versions of Tripwire to go around.

The Listen and Fun Tripwire is actually rather rare.  As the figure was released through non-traditional outlets, many kids didn't know about it.  He never appeared in any catalogs, so collectors had little way of knowing of him, either.  This has lead to a $50+ figure today.  As Tripwire features unique accessories that can be easily lost and paint that wears easily, finding a mint and complete figure can be a challenge.  So, he remains one of the most expensive vintage figures, even if he is relatively unknown and not something on most collectors' want lists.  Personally, I don't find this figure offers much to my collection.  The 1983 Tripwire and even the 2001 are much better options.  And, if you want something odd, the Funskool version is better.  So, for the price, this isn't a figure that I've found to be really worth the cost.  But, he does stand as an oddity among the first 4 years of the Joe line. 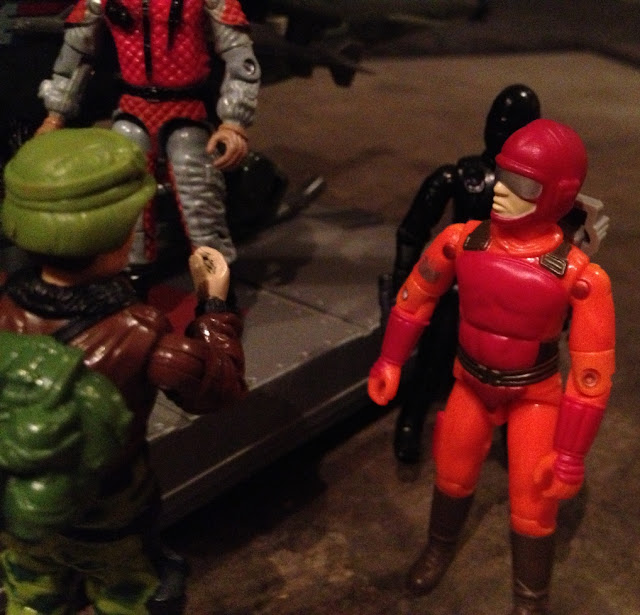 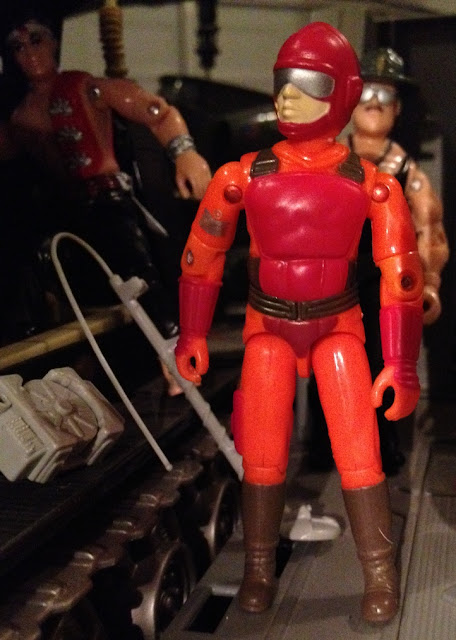 Posted by Robot_Sonic at 11:55 AM
Email ThisBlogThis!Share to TwitterShare to FacebookShare to Pinterest
Labels: 1985, Tripwire