The Rattler is probably the most iconic Cobra aircraft in the line's history.  It was the first larger sized Cobra vehicle to be released at retail and was meant to be a foil to the Skystriker.  In the look and feel of the toy, Hasbro produced a triumph for the line.  The Rattler meshed with the Cobra army, had detail that rivaled any Joe vehicle and was fun to play with.  It was a perfect storm of awesome.  Which isn't to say the plane isn't without some problems.  But, the Rattler is as definitive a vehicle release in 1984 as the Whale.

The Rattler was a brittle toy. The landing gear were easy to snap off, making the plane somewhat useless. And, the canopies featured hard plastic tabs that were also easy to break. These were more problematic since, once broken, they fell off anytime you tried to have the plane fly in any way that wasn't perfectly parallel to the ground. This lead the Rattler's quick demise in my childhood collection. While the Skystriker had suffered great play wear, it didn't have the small, fragile parts of the Rattler and was able to remain useful to me for much longer. This, naturally, lead to the Rattler's diminished importance in my collection. Since the one I had was broken, I never used it. So, my Cobra air army was relegated to the Trouble Bubble and a Claw.

The Rattler first came to my collection in October of 1984. I had been anxiously awaiting the Rattler since I first saw it in the '84 catalog back in January of that year. Wild Weasel had appeared in the comic and I was eager to finally add this missing piece of the Cobra hierarchy to my collection. My younger brother finally got the Rattler for his birthday that fall. Once we had the plane, it's luster quickly faded. Wild Weasel wasn't nearly as cool as his comic appearance had indicated. The plane was missing fun features like the ejector seats that were standard on the Skystriker and the gunner seat barely held a figure and he was stuck facing forward. But, the worst part was that the Rattler was broken in a matter of days. Once that happened, the usefulness of the plane was destroyed. As such, the Rattler was never my Cobra plane of choice. And, as my Cobra air force was so paltry, I developed my Cobra as a more ground focused enemy. I viewed air combat as too expensive and counterproductive to Cobra's goals. They were better off fighting American air power from ground emplacements and mobile gun batteries rather than trying to dogfight with superior technology. When the Mauler was released in 1985, though, I thought the Rattler would make a perfect foil to the Joe's newest weapon. But, since my original Rattler had long since been buried in a broken heap at the bottom of the toy box, this confrontation never came to fruition and encapsulates my frustrations with the quality of the Rattler as a toy.

The Rattler is both superior to and quite inferior to the Skystriker. The Rattler was obviously meant to be a lower price point item than the flagship Skystriker. But, from a detail standpoint, the Rattler was better. The cockpit was more detailed and the rotating wings and back gunner turret were play features that surpassed the Skystriker with ease. However, the Skystriker's working parachute seats and retractable landing gear gave it an edge over the Rattler as well. The main thing that was apparent was that Hasbro's ability to create detailed vehicles was increasing every year and the Rattler showed an improvement in the toy making process in terms of what could be delivered at a price point. It was a trend that would continue for a few years with the vehicles and a few more years with the figures.

The Rattler mold saw decent use. After it's run in the US, it was also released in Argentina in colors very similar to the original. In 1988, it was repainted in Tiger Force colors, re-patriotized and turned into a Joe vehicle. In 1997, Hasbro surprised collectors with the well thought out A-10 that also used the Rattler mold. This plane, while visually appealing, has severe quality problems, though and is really a vehicle that looks much better than it actually is. In 2002, Hasbro released a copper colored monstrosity that didn't even include a canopy for the gunner. In 2008, the mold was refurbished and brought back to retail in identical colors to the vintage plane as part of the Anniversary line. In 2009, that same mold will be released again in Tiger Force colors as an homage to an homage. Going forward, it is likely that this is a mold that will be used whenever Hasbro finds a place for it. So, we have likely not seen the end of the Rattler mold.

Before you go out and drop ~$70 to buy a mint, complete Rattler today, you should look into the 2008 reissue of the vehicle that was a Target exclusive. This plane is nearly identical to the original (the missiles are slightly different colors) and can be purchased for about 1/3 the cost of an original. On display, the two would be nearly indistinguishable and you would get the benefit of plastic that is 25 years newer. If you are a nostalgia buff like me, though, the original still has it's place in a collection. There is just something about owning a toy that was around during those brisk fall days of 1984 when I first took my original Rattler outside to play. That is the main reason why this sample has stuck with me and remains in my collection. The look of it is enough to be meaningful in a display and the design is something that should be enjoyed. I'm long past the point where I'll be flying my Rattler around the house so the display aspect is what makes a vehicle relevant to me. It is rare for a vehicle this size that was part of my childhood for so short a period to attain such a place of prominence in my collection. But, that is a testament to the quality of this toy. 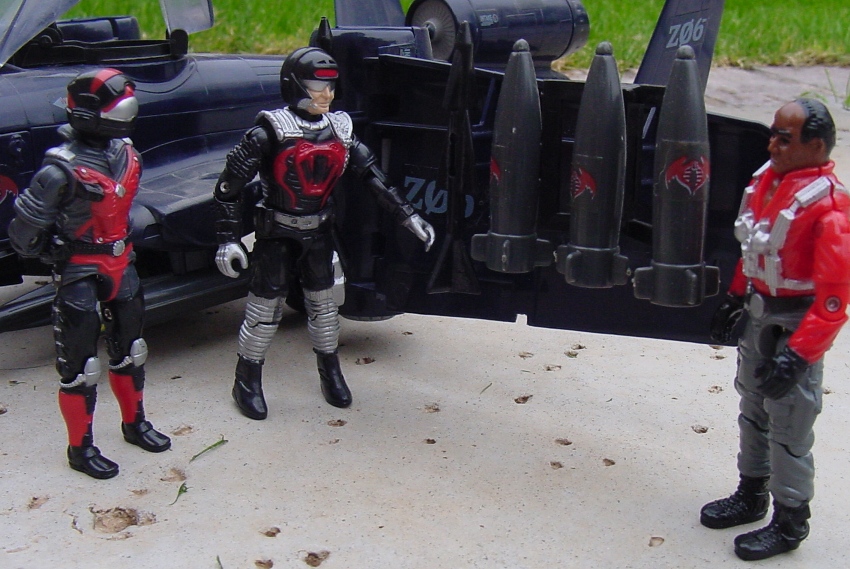 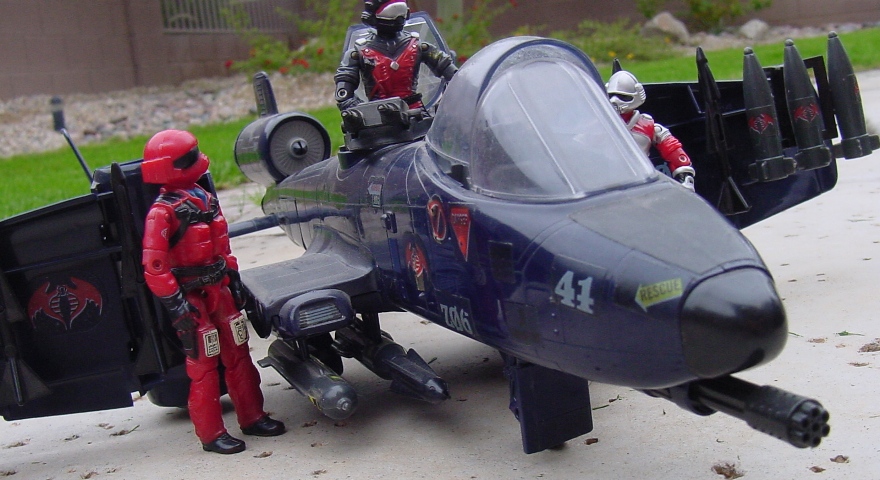 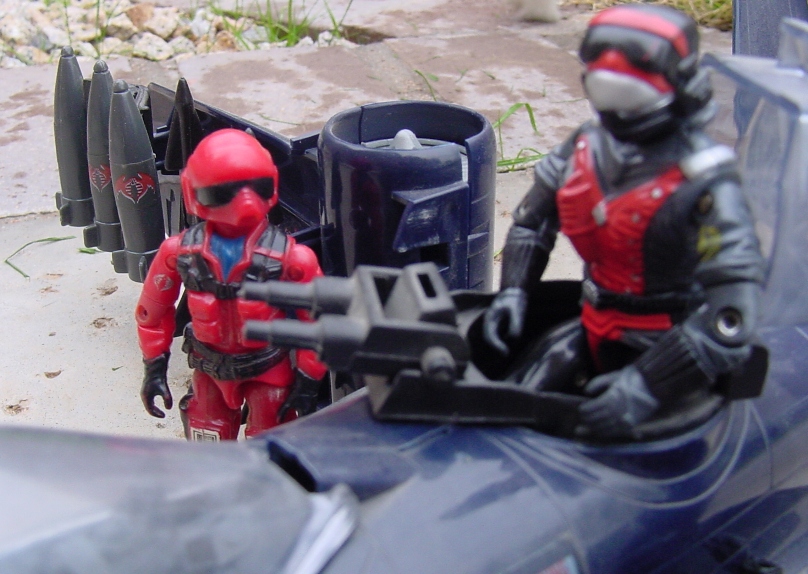 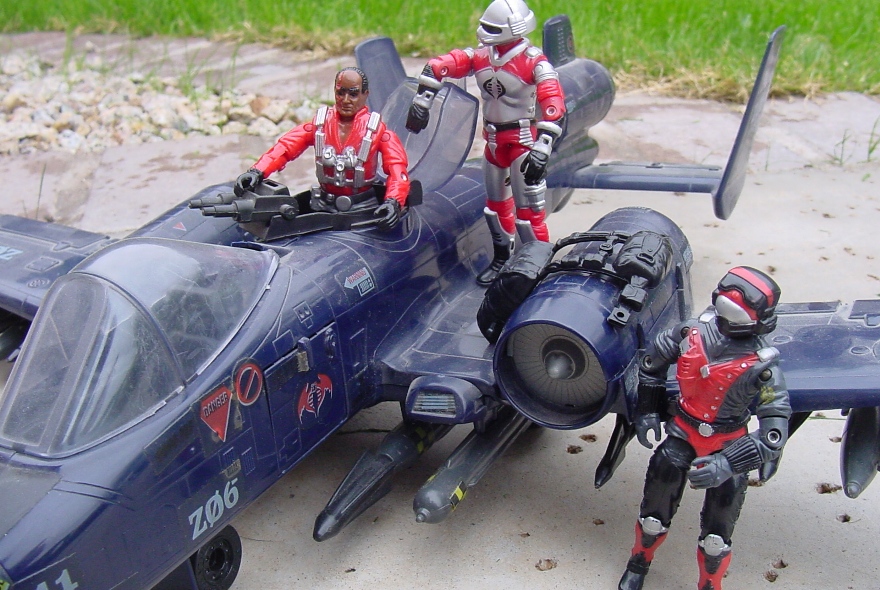 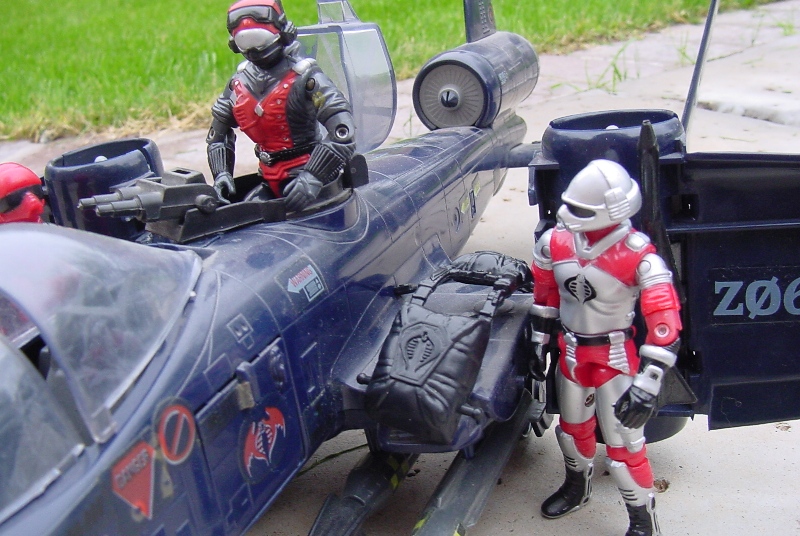 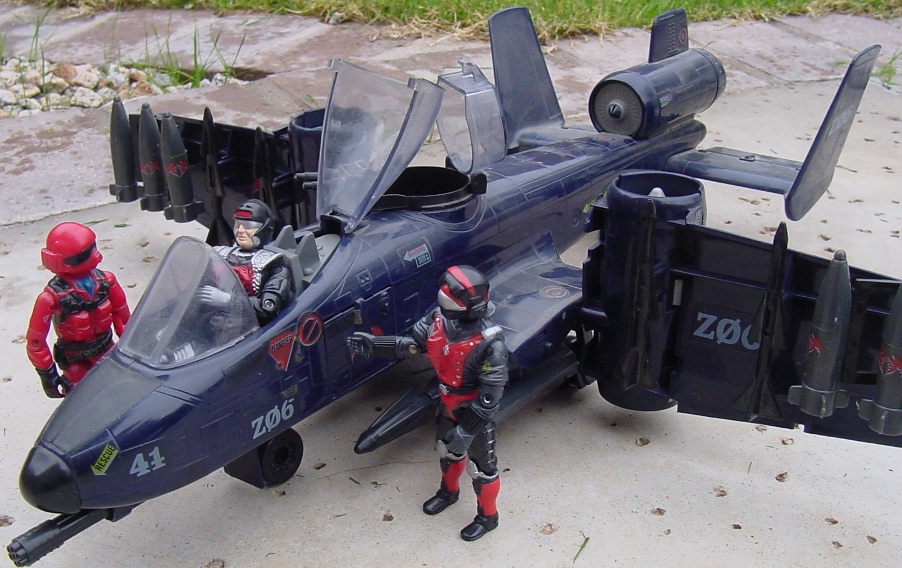