The idea of Joe fighting drug dealers hasn't been a popular one in the modern collecting world.  Regardless of feelings about the subject matter, though, the characters and figure molds that were released during the first wave of DEF figures are among the best in the line.  The feature unique and highly detailed sculpts, muted, realistic colors and great accessories.  In the years I've been at this, I've profiled most of the figures that comprised the first wave of DEF figures.  They are simply that good.  In modern times, more collectors have warmed to these molds and many DEF figures count themselves among the most expensive and desirable post 1990 figure releases.

The Headman was the leader of the Headhunters and the big cheese in drug trafficking.  I call him the big cheese because the figure does bear a resemblance to the Hamburglar and part of me always thinks of that when I see the figure.  The original coloring was decent enough with a black suit dusted with gold stripes.  But, the 2002 figure went all out.  It turned the Headman into a flamboyant drug dealer with the gaudy suit to match his personality.  It was this great orangish-brown suit that drew my attention to the 2002 figure and made it stand out against the backdrop of his similarly colored contemporaries.  The one element of the figure design of which I have never been fond, though, is the pony-tail.  While that physical feature fits the Headman's intended specialty, it does not match with the characterization I have assigned to the figure.  It is a minor point but one that probably keeps this figure from seeing as much use in my collection as it otherwise would were the pony tail omitted.

In my collection, Headman is not a drug dealer and he is not named Headman.  Instead, he is named Rialto.  Rialto is a supply chain management genius and holds an MBA in the subject from an Ivy League university.  Rialto's position within Cobra is as the head of munitions manufacturing.  He is not the designer but he is responsible for ensuring that the raw materials and production facilities needed for Cobra's arms business is a fine tuned machine.  He also oversees the transport of the completed munitions to their final destination.  He is in control of the Cobra ports, railroads, highways and motor truck cargo capacity.  It is a huge responsibility that makes Rialto one of the most important members of the Cobra hierarchy, even though he is, officially, a non-combatant.  It also gives him some leeway in terms of fashion sense since he has no combat role to worry about.  Plus, it's really not like an organization like Cobra: full of outlandish uniforms, would frown on Rialto's choice of wardrobe.

This non-combatant status, of course, causes rifts on Cobra Island.  Combat commanders do not like someone who does not fight having so much power within Cobra.  But, the Commander is fine with this as and actively encourages Rialto's non-combatant stance.  The reason why is since Rialto understands the the logistics of Cobra Island's transportation system, would he ever decide to lead an insurgency on the Island, he would have a huge advantage in moving his troops around the island.  This fact isn't lost on the Commander and he ensures that no combat troops ever deal with Rialto.  That way, Rialto's knowledge is only dangerous as part of a plot rather than as the mastermind.

For his part, Rialto doesn't mind.  He has access to one of the most ambitious manufacturing operations in the world and the logistics of moving massive amounts of hardware all over the globe keeps him satisfied in his duties without having to dream of conquest.  This has lead to a friendship between Rialto and Ramen.  (Cobra's South American Commander.)  Ramen admires Rialto's abilities and his dedicated focus.  The two also share an Ivy League pedigree and that has fostered comradeship.  Ramen considers Rialto one of the keys to the Cobra dynasty and one who, if in Ramen's stable, would give him the ability to do pretty much anything he wanted in the Cobra world.  Rialto has resisted actively joining Ramen, though, as he feels his neutrality is better serving the good of Cobra.  At some point, though, he will be forced to declare allegiance to either the Commander or to Ramen.  When that day comes, the winner will have one of the most important allies in their stead and will gain a clear advantage over the other....

Of course, this leads one to question Rialto's motives.  Why would one of the brightest business minds in the world go to work for Cobra where the military aspect could spell doom despite great business success?  The answer to that lies in Rialto's upbringing and character.  While Ramen was a criminal whose exploits had him facing dozens of years in a white-collar federal prison, Rialto joined Cobra for the challenge.  Rialto wanted to head one of the world's largest companies upon graduation.  But even the most forward thinking company would have put off his dreams for at least 20 years as he navigated the murky world of corporate politics.  In Cobra, Rialto found a refreshing honesty that comes from such a confrontational and deadly military culture.  In Cobra, Rialto didn't have to worry that a rival might sabotage a presentation.  Instead, that rival might just shoot him.  That certainty made Cobra attractive and Rialto was able to rise through the ranks in only a matter of a few years.  There were no golf memberships, knowing the right people nor the other hallmarks of traditional corporate malarkey.  Instead, there was a certainty that if he proved himself, the military commanders would give him control of all the assets he desired and leave him to his devices as long as the money kept rolling in.  The military commanders were glad to be free of the hassle of the business logistics since those did not build their troop counts nor their battles won.  They left Rialto free and he has made the most of the opportunity.  Perhaps too well, though, as his power has become a spot of contention and competing factions on Cobra Island wish an oath of loyalty out of Cobra's most famous and powerful civilian.

The Headman mold was used in 1992 only.  The figure was then first used again in 2002.  Since then, the mold has not been used again as Headman but has appeared as the stock look for suits in the line.  First used on the comic pack General Flagg in late 2004, Hasbro then re-used it again for the under-appreciated suited Tomax and Xamot figures that were included with the Toys R Us exclusive Crimson set in early 2005.  It has not appeared since then, but is certain to be the first choice if Hasbro ever needs another ARAH-style figure that wears a suit.  Truthfully, though, the mold isn't too overexposed since the three releases have been of such drastic different colors and included on such diverse characters.  But, at the same time, I really don't think we need another Headman unless he was to return in a set stocked with his Headhunters and Headhunter Stormtroopers.  Otherwise, the character has been adequately done.

The reality is that Wave 1.5 in 2002 was one of the most overproduced wave in Joe history.  Hasbro needed a stop gap wave to fill in between the disaster that was Wave 1 and the re-tooled with O-rings figures that were planned to be Wave 2.  Retailers were warm to the designs in Wave 1.5 and the floodgates were opened.  Most major retailers stocked Wave 1.5 in abundance.  As if this weren't enough, though, many non-traditional toy retailers such as JC Penny, Kohl's and others also ordered this wave and stocked in their stores.  K-Mart even received an exclusive product wave where a 2-pack of Wave 1.5 figures was packaged with a third "bonus" figure from the Wave.  This made even popular figures like the Viper and Alley Viper very easy to get and collectors were able to stockpile massive armies just through successive months of retail incursions.  As if this weren't enough, though, Hasbro ended up selling a massive production run to Family Dollar stores.  They had walls and walls of the figures in their stores and were not able to get rid of them until they reduced them to $1 per pack in the summer of 2004.  In between times, Hasbro also sold off large quantities of overstock to an Israeli toy dealer and many high end American collectors were offered cheap quantities of army builders from Israel, provided they pay the shipping.

The result is that there is no Wave 1.5 figure that is very desirable.  Even the army builders can still be had for under $5 each and most of the other figures are often sold for $2 or less.  The Headman is one of these as he is often ridiculously cheap.  Personally, I feel the Wave 1.5 figures were decently done and the accessories with the non-army builders alone are worth the small price you often pay to acquire these figures.  I have purchased several after market Headman figures for almost nothing just due to the fact that they are cheap and the figure's look is good.  For the price, this figure is a no-brainer to add to a collection.  Unfortunately, it is unlikely that he will ever be appreciated for more than that. 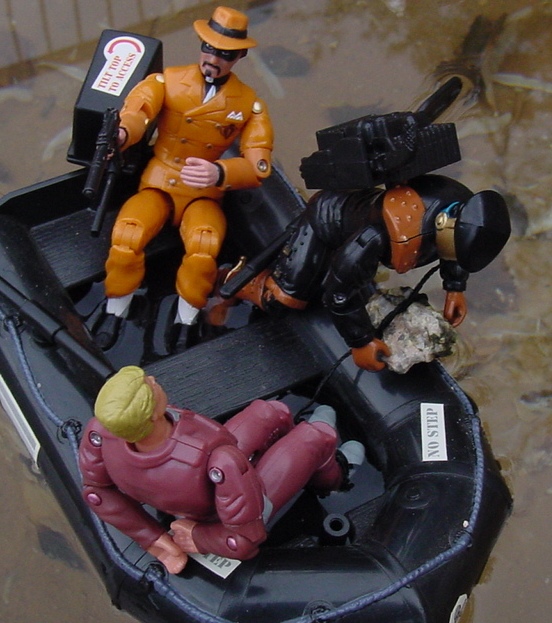 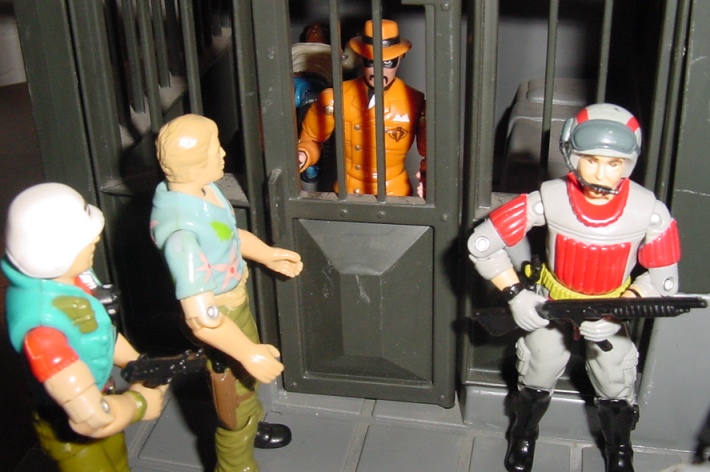 Posted by Robot_Sonic at 10:35 AM
Email ThisBlogThis!Share to TwitterShare to FacebookShare to Pinterest
Labels: 2002, DEF, Headhunter, Headman