The 1985 Tele-Viper is an iconic Cobra army builder.  While the mold may be a bit odd, the release year and the prominence of the character in both the comic and the cartoon have kept him popular.  With Cobra's reliance upon technology, the Tele-Viper remained important long after the figure had disappeared from retail.  In 1989, Hasbro somewhat rectified that problem by offering a new take on the Tele-Viper mold.  Instead of iconic Cobra Blue, the character was incorporated into the Python Patrol subset.  The result is a figure that is bright, busy, but not altogether terrible.

Python Patrol was meant to be a "stealth" unit of Cobras whose uniforms made them invisible to radar and other technology.  To make up for that advantage, they chose bright yellow as one of the primary colors for the Python palette.  This unfortunate choice severely limited the quality of Python Patrol as a group.  The subtle grey and black used as a base for most of the figures was a great foundation upon which to build.  But, the bright yellow really holds the subset back.  Instead of being a valued member of the Cobra army, they are mostly useful only as a group and when displayed with the full complement of figures and vehicles.  In this group, the figures do look good as they mesh well and really look like a specialized team.  It's just that the bright colors limit the usefulness of the overall group.

Python Patrol originally consisted of 6 members: the Crimson Guard, Cobra Trooper, Cobra Officer, Viper, Copperhead and the Tele-Viper.  Made by Hasbro in their normal factories, the Python Patrol was a way for the line to be expanded beyond the traditional standard carded figure mix at retail.  The reuse of popular molds was a way to make the figures cheap enough to justify the truncated production run.  Tiger Force in 1988 had laid the groundwork for the success of such a concept.  And, Hasbro stepped it up in 1989 with both Python Patrol and Slaughter's Marauders.  As Joe moved into the 1990's, Hasbro went subset crazy and the line became more centered around the multitude of subsets they offered rather than the standard carded line.  By 1993, Hasbro even branded the main carded line as Battle Corps.  This loss of identity helped the line fade into oblivion.

The Tele-Viper has an interesting companion piece that was released in Brazil.  The criss cross cammo pattern on the figure's legs is a match for the Brazilian Python Patrol Ripcord: Relampago.  It's likely that Estrela simply used the paint sample to help design Relampago.  But, it does help tie the Brazilian figure to the American Python Patrol and makes it much easier to integrate the figures from the different lines.

In my collection, Tele-Vipers are basically the technological support for the Cobra legions.  The remain the type of character who isn't overly combative, but will see combat when they are embedded with Cobra Infantry units.  Beyond that, Tele-Vipers are the standard Cobra base troopers.  They man the communications stations in Terrordromes and will be assigned to work on vehicles and aircraft as well to ensure their communications systems are working.  Usually, though, these roles are always filled by the V1 Tele-Viper due to the Cobra blue.  The Python Tele-Viper is usually only seen in support of Python Patrol units.  But, these are few and far between.  The bright yellow limits the figure's ability to look good when paired with Cobra vehicles or aircraft.  If you expand into some of the vehicles from the line's later years, the bright colors become less of an issue.

Still, the figure has it's appeal.  I've always found the Tele-Viper head to be overly large.  The entire mold appears...bloated.  But, when you consider the amount of gear Tele-Vipers haul around, they would tend to be bulkier individuals.  So, I can look past the puffiness.  The base grey and white with the black accented head are a great start to the figure.  The Python cammo pattern is intricate and detailed.  Even the maroon goggles work within the context of the figure's specialty.  The bright yellow undershirt and base helmet, though, are a bit too much.  Even the more muted green from the Python Officer would have been better.  It makes the figure overly bright.

The Python Tele-Viper includes the same accessories as the Version 1 figure.  The pack, gun and hose were highly advanced for 1985.  Unlike the accessories from Mainframe, though, the accessories hold up fairly well.  The pack still has an antenna to link to Cobra satellites and the general size of the pack is consistent with the increased functionality the modern Tele-Viper would employ in his duties.  The figure's "gun" is an iconic look.  In the comic and cartoon, it worked as a 2 way camera that could both record and play back video.  As a kid, I also used it as a radiation gun that would project radioactive or microwave beams.  It was a group of Tele-Vipers who basically cooked a team of Joe aligned custom figures I used as a child.  Once that event occurred, the Joeverse that I still have today was born.

The Tele-Viper mold was not overly used.  After the 1985 figure was released, the chest was used in 1986 to make Claymore.  This Python Patrol version appeared in 1989.  After that, the mold was sent to Brazil.  In the early 1990's, Estrela released a Tele-Viper in colors basically identical to the American Version 1 release.  After that, the mold disappeared.  Despite collector demand for its return during the repaint era, Hasbro was not able to come through.  So, collectors are left with just three releases of the figure: two being basically the same and the third being a highly specialized subset.

Python Tele-Vipers aren't overly expensive.  Mint and complete with filecard versions typically run around $12.  While the Python Patrol figures tend to be a bit tougher to find than the originals from which they were created, the decreased collector demand for them helps keep the prices in check.  As a subset, the figures are interesting.  But, individually, the bright colors make them less useful.  So, you don't see too many Python Tele-Viper armies out there.  I've found it's always good to have a different take or two on classic Cobra army builders.  But, the quality of the original Tele-Viper so outweighs the colors of this version that having multiple versions isn't as useful as it is in some other cases.  As an element to complete a collection, the Python Tele-Viper has value.  But, as a be-all/end-all supplement to the Tele-Viper character, though, the figure is somewhat lacking. 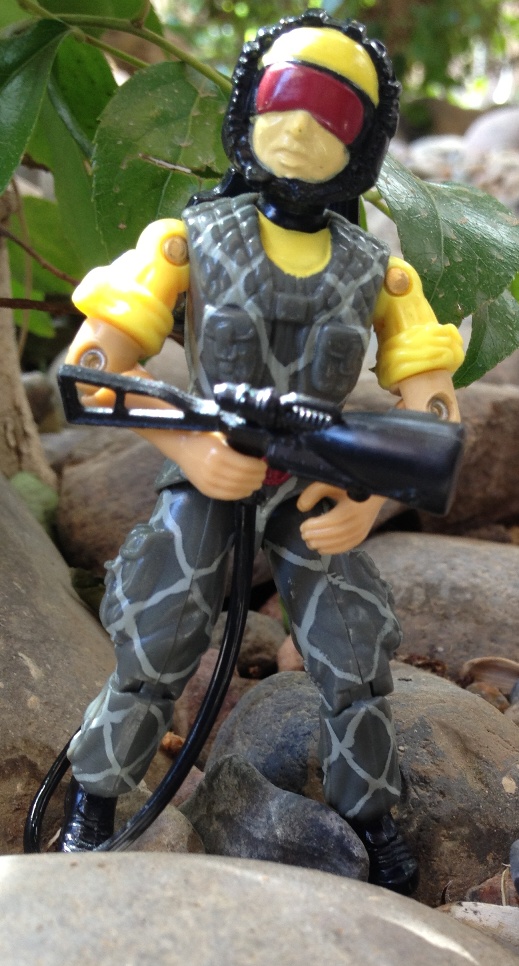 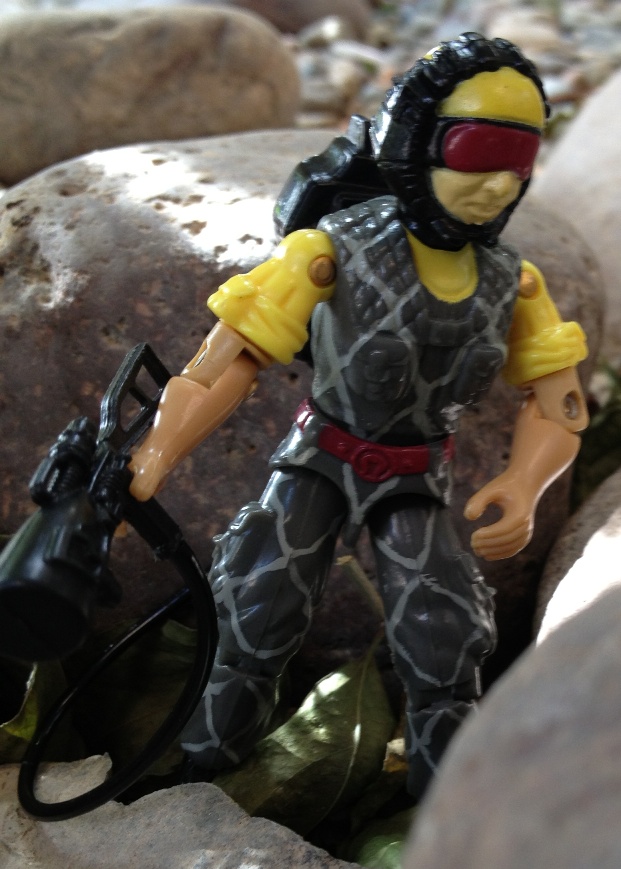 Posted by Robot_Sonic at 9:08 AM
Email ThisBlogThis!Share to TwitterShare to FacebookShare to Pinterest
Labels: 1989, Python Patrol, Tele Viper