In the 1990's, the Internet was nascent.  So, if you wanted to find up to date information about toy collecting, you went to your local bookstore once a month and bought a copy of Lee's or Toy Fare magazine.  In these, you would find the latest pictures of upcoming toys, articles about rare or obscure toy lines and speculative articles about what the next hot toy would be.  Slowly, the Internet changed all this and information and pictures about collector themed toy lines would be broken online and discussed to death long before a printed publication could catch up.  Today, printed toy magazines are all but dead: a relic of a prior era.  But, the toy industry didn't go into the future without a fight.

While toy magazines had long offered toys as an incentive to subscribe to their publication, it was mostly limited to factory overstock.  (Lee's toy magazine was still offering 1993 G.I. Joe mail away figures as their subscription bonus into the 2000's.)  As the Internet made them more and more obsolete, though, the magazines went a different route.  Using their connections to the toy manufacturers, the magazines were able to procure exclusive toys that they could sell through a retail arm.  The upside to collectors was that the toy magazines were company independent and could, theoretically, develop an exclusive from any toy line in the marketplace.  Toy Fare produced exclusives for the Masters of the Universe and Simpsons lines that were well received.  In 2003, they decided to foray into G.I. Joe as an attempt to capitalize on the line's burgeoning popularity.  (While many collectors think the 25th Anniversary was the beginning of a Joe resurgence, the reality is that the 2002 relaunch brought many more collectors into the fold and really was the golden age of Joe online interest.)  The result was a two pack of figures that were comprised of repaints of iconic Joe characters: Snake Eyes and Scarlett.

As a character, you don't get much bigger than Scarlett.  She is one of the top ten or so most popular characters in the entire Joe mythos.  Despite that, the character only had two figures in the line's original run: the 1982 original and a 1993 Ninja Force redesign.  This mismatch between the importance of character and few retail figures was resolved in the repaint era.  Since 1997, Scarlett has had no fewer than 16 versions of the character released.  (Which is still a surprisingly small number when you consider that both Duke and Snake Eyes have seen over 60 versions of figure releases.)  The problem with Scarlett as a toy, though, is that the only ARAH style molds of her are either dated or limited by archaic gimmicks.  But, those limitations didn't really stop Hasbro from exploiting other figures during that era.  The real limitation was that despite collector demand for Scarlett, Hasbro maintained the perception that female figures did not sell during the 2000's.  So, slots allocated for Scarlett were few and far between.  This left ARAH style Joe collectors with precious few takes on the Scarlett mold to represent the character in their collections.

As a mold from the first days of Joe, Scarlett is nothing short of amazing.  While Hasbro reused most of the parts from the original 13 where ever they could so save money, they took no such shortcuts on a figure they knew would have limited reuse and limited retail appeal.  Scarlett has textured padding on her shoulder, just like the Flash mold.  In addition, her arms are decked out with throwing stars on her left gauntlet and her back-up pistol molded under her right.  (A detail that was perfectly fleshed out in the short story "Hot Potato" in Marvel's first issue of G.I. Joe.)  Her lower body showcases a knife, what appears to be an explosive device and a slingshot all molded onto the figure.  It is a level of detail that was rarely present during the line's first year and shows the dedication the Joe team had to quality when you consider they spent that amount of expense to develop a figure who was sure to be their poorest seller.

As a figure, this version of Scarlett is excellently done.  The figure features a full eight colors: silver, red, green, tan, white, purple, flesh and black.  It really is convention level quality in terms of the paint masks.  Every detail on Scarlett is painted.  Her gloves are two toned with a small ring of white separating the tan and the purple arm.  Her belt is painted between the loops and has a differently colored buckle.  All of the gear on her lower body is highlighted and even the pouches on her boots are done in purple to offset them from the black footwear.  The color palette in general is relatively pleasing.  Scarlett keeps her tan base which is true to the original character, but uses a purple undercoat to tie her to the 1997 offering.

But, this is the main problem with the figure.  Really, this Scarlett is two homages in one: both the 1983 original and the 1997 repaint.  So, while the overall detail is remarkable and the colors are decent, the whole thing feels like its been done before.  There is nothing overly original about the paint scheme that gives a new take on Scarlett.  Collectors saw the purple and tan Scarlett and the brown details Snake Eyes and thought: "Hey, I already have a tan Scarlett.  I already have a purple Scarlett.  I already have several Snake Eyes figures with painted details.  (The 2003 DVD Snake Eyes uses the same paint masks as the Toy Fare Snake Eyes, but used a purple body to match the cartoon.  The result is something new for Snake Eyes and an example of what could have been done.)  Why should I buy this set to get two figures that are basically the same as what I already have?"  Instead of doing something new, like giving Snake Eyes the camo pants from the concept art and doing Scarlett in a matching motif, Toy Fare went with something safe.  Their hope was that non Joe collectors would see the homages and buy them.  But, the result was that Joe fans were alienated at a time when there was a huge amount of product hitting the market.  So, this set was relatively ignored and quickly faded into obscurity.

Scarlett's accessories are abundant.  In addition to her iconic crossbow, Scarlett also included the ubiquitous black version of the 1991 Dusty's backpack.  She also included two swords.  These are a great theoretical addition to a Scarlett release.  Tying to her Ninja Force days and link to Snake Eyes, it made sense to have her add swordswoman to her pedigree.  The reality, though, was that Hasbro used two swords from the Ninja Force era with the figure.  The weapons designed with the larger 1992 figure molds in mind are not a great match for the 1982 era Scarlett mold.  More contemporary swords like Stormshadow's Katanas would have been a better fit.  So, while Scarlett has the swords, they look awkward when used with the figure.  But, at it was a good attempt.

The Scarlett mold was probably overused around the world.  The straight armed mold was released in the U.S., Argentina and Brazil.  In Argentina, Plastirama reused the mold as the exclusive Glenda figure.  Estrela used the mold for a white jumpsuit Scarlett named Athena.  The swivel arm mold also got good use.  After the U.S. release, it was used for Quarrel in the European Action Force line.  After that, the mold lay dormant until 1997.  Hasbro used it then, again in 2003 for this figure and finally in 2006, though with a new head.  The issue is that there isn't much diversity in the American Scarlett releases.  Though they had many molds from the 1983 series of Joes available to them, Hasbro didn't do much with them.  Much of the repaint era is the story of unfulfilled potential on the repaints that were offered.  While many figures weren't bad, the reality is that they could have been so much better.  There has been more creativity with repainting molds in the modern line.  But, collectors during the repaint era were largely short-changed with the quality of the releases Hasbro developed.

In 2003, an online toy dealer approached Hasbro about repainting this set for an exclusive distribution.  Hasbro agreed in principle to the set.  The premise was to repaint the Toy Fare figures in Action Force homage themes.  So, in lieu of Scarlett and Snake Eyes, the set would include Action Force Stalker and Quarrel.  (Copyright issues would have prevented those names and it would likely have been Undercover Scarlett and Agent Stalker.)  The figures would have been close in color to the Action Force originals.  But, with some new details and highlights to differentiate them.  However, the deal could not get closed in time.  So, the set never saw the light of day.  But, it would have been a nice addition to the repaints from that time period.

The reality is that the Toy Fare set sold very poorly.  While some Toy Fare exclusives, notably from the Simpsons line, had seen huge aftermarket increases in value,  (Along with questionable distribution practices.) the Joe set mostly languished.  It is likely a combination of overestimation of the Joe collector market along with higher production numbers that doomed the set.  (The fact that the Snake Eyes and Scarlett figures weren't as popular in 2003 than they had been in 1998 and 1999 also played a part.)  Demand was low and unsold sets were still around for years.  Speculators who bought the sets in droves quickly found them worth less than retail price and many of the sets were dumped at a loss.  Today, you can still buy sealed, boxed sets for under $10.  Individual figures, if you can find them, rarely top out at $4.00.  It is a notably cheap price for a figure of this quality and allows every collector to get a great version of Scarlett for basically nothing. 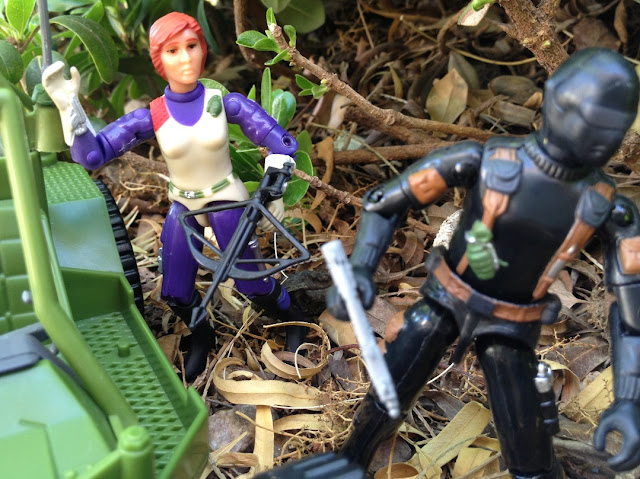 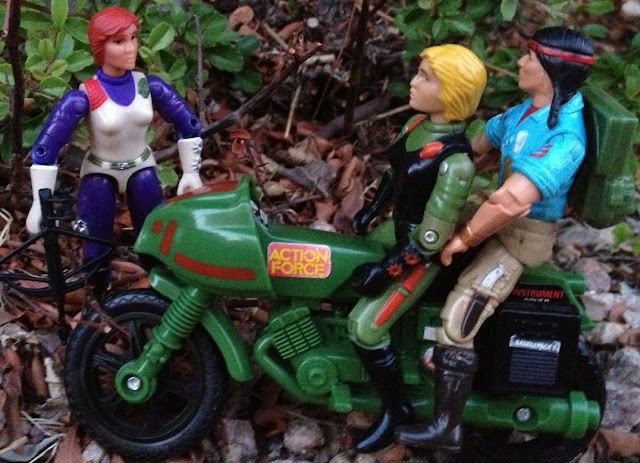 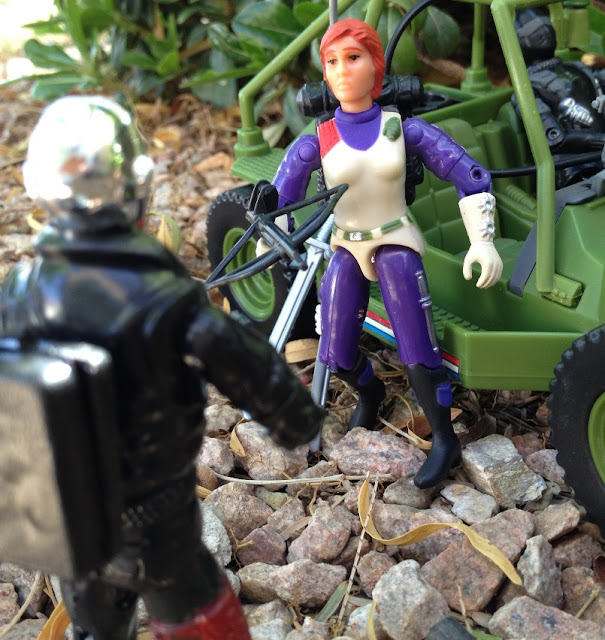 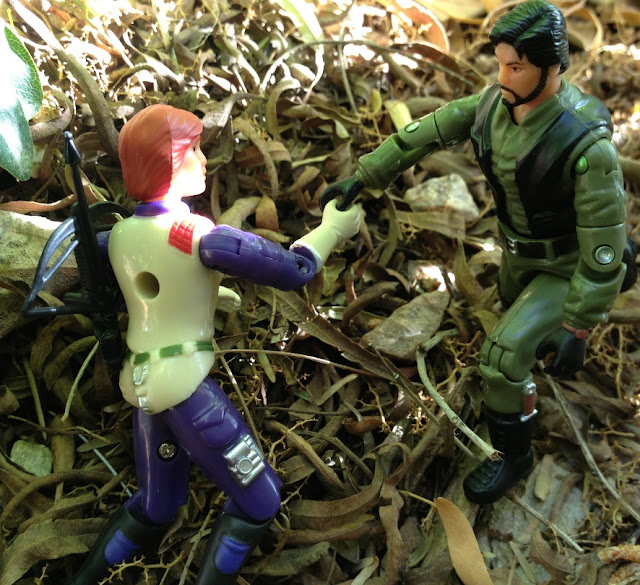 Posted by Robot_Sonic at 9:06 AM
Email ThisBlogThis!Share to TwitterShare to FacebookShare to Pinterest
Labels: 2003, Retailer Exclusive, Scarlett