At the end of 1987, I basically decided I was too old to be buying Joe toys any more.  Of course, as I saw the new 1988 figures, I really wanted a few.  So, in the first few months of 1988, I did buy a few select figures from that year.  Usually, I justified these purchases with various reasons.  I couldn't just want something.  I had to come up with a reason why it made sense for someone my age to still be buying action figures.  When I found Hardball, I had the perfect justification: he was a baseball player and, at the time, I was a baseball fanatic.  So, I had my reasoning and purchased Hardball.

Once I had the figure, the baseball angle quickly went away.  While the mold has the hallmarks of a baseball jersey and cap, I just took these as design elements rather than a full characterization.  Really, the value of the figure was the massive grenade launcher.  I had long ago lost Gung Ho's grenade launcher.  So, having this new one available to me filled a need.  Hardball found himself among the crew of a generic dump truck that fit a SLAM into the back of it, perfectly.  He was put on this detail to take out the STUNs and Hiss Tanks that would attack this moving armory.  Here, his grenade launcher was put to great use as he was able to disable any vehicles without having to leave the confines of the truck.  Alas, though, this duty only lasted for a few months before I was done with toys.

As a mold, Hardball is fairly decent.  The torso is rather bland, except for the blue trim.  His legs are well detailed with extra grenades and a holster.  His arms feature 3/4 length sleeves coupled with fingerless gloves.  Really, the total package is more interesting than the primary white and brown coloring suggest.  The head is well detailed and fits with the body.  The main gripe, though, is the red G.I. Joe on his chest.  Nothing says super secret covert missions team more than advertising your unit name on your uniform.  This isn't enough to sink the figure, but is something that was new to the Joe line.

Hardball's accessories are well done.  The grenade launcher has a working chamber that actually spins.  This is likely the cause for the weapon's large size.  It is a bulky accessory, but not to the point where it's useless.  (It is actually a perfect fit for the 1992 Gung Ho figure.  It matches the larger proportions and allows the figure to retain a weapon true to his roots.)  Hardball's pack is also well detailed.  Filled with extra grenades, it is a perfect match for the figure.  Hasbro was detailed with their accessories into 1993.  So, Hardball has the pack and weapon that match up to help define the character.  It was this attention to detail that kept the figure more interesting than he might otherwise have been.

Being one of the last figures of my childhood, Hardball never saw any great action.  By the time he entered my collection, most of my figures were packed away.  Hardball saw use for a few months.  But, by the time spring rolled around, my focus was solely on collecting the more socially acceptable sports cards.  So, Hardball was tossed into a plastic bin and pretty much sat there for a long time.  My brothers never really had any interest in the figure.  So, my figure remained in good condition with his accessories.  In the '90's, when I returned to collecting, Hardball was in the bin of figures that I had left available to me.  But, rather than have him be a major player in my collection, he became more of a cannon fodder type.  He might represent a casual military member who would be done in by Cobra, a civilian who got caught in the cross fire of Cobra's urban death squads, or a mechanic who would get taken out by the Dreadnoks.  Today, the figure isn't more than a display piece.  I have found that he rarely appeared in any of my photos and has been a figure that even I overlooked.  That isn't likely to change.  This is a good figure, but not one that I recall and use frequently.

The Hardball mold only saw release in the U.S. in 1988 and 1989.  It never appeared in any foreign countries and was never repainted by Hasbro.  When the Joe line returned in 1997, Hardball made sense as a figure they would revisit.  But, that never happened.  In 2008, Master Collector did dig up the mold and used parts of Hardball on the Hotwire figure.  However, the full character never appeared again.  In new colors, the character would have been welcomed in any of the TRU exclusive sets or in a convention set.  The result is a mold that remains unfulfilled and could come back at some point in new colors and be welcomed by collectors.  But, since the ARAH molds are likely done, that will never happen and we are just left with the original Hardball mold.

Hardball figures are not hard to find.  They are plentiful and cheap.  He is not a character that has ever really caught on in the Joe community.  This has kept him relatively easy to find.  That should not dissuade you from the figure, though, as the quality that vintage collectors desire is very much present.  This leaves Hardball as one of the quiet gems that the line still offers.  Sure, this guy isn't Flint or Snake Eyes.  But, the mold, character and accessories allow him to stand with those figures without being glaringly different.  The Joe line needs its supporting characters to flesh out the team without diluting it with too many versions of the major players.  (The modern lines have all fallen into this trap.)  Hardball fills that role well and is deserving of calling all collections his home. 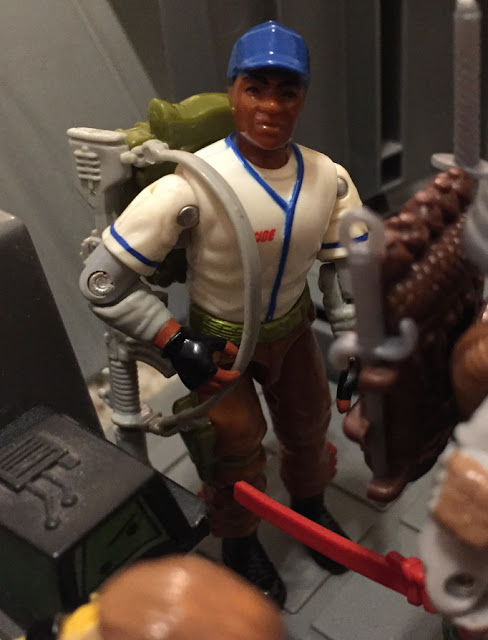 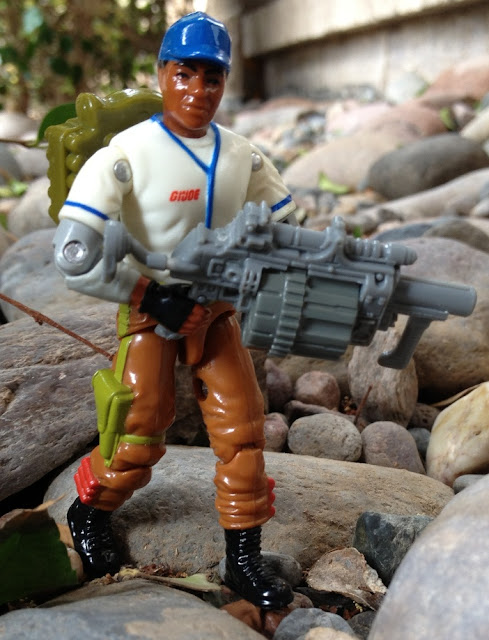 Posted by Robot_Sonic at 3:07 PM
Email ThisBlogThis!Share to TwitterShare to FacebookShare to Pinterest
Labels: 1988, Hardball