In 2001, KB Toy Stores managed to snare a G.I. Joe exclusive.  Despite the heavy emphasis on "military realism" that dominated the 2000 and 2001 Hasbro offerings, KB managed to acquire the rights to the legendary Manimals figures.  To much fanfare, they released the oddball toys in separate waves.  The first wave consisted of Iguanus, Slythor and Warwolf.  This wave was dead on arrival at retail.  Within weeks, Manimals were backed up at every KB Toy Store in the country.  No one wanted them.  So, the planned second wave of Manimals was cancelled: making them the only twice cancelled concept in G.I. Joe history.

There are a lot of reasons why this all happened.  A powerful person inside the KB family was a huge G.I. Joe fan.  And he, likely, had a lot to do with these forgotten concepts getting resurrected.  But, at the time, the hype of Manimals far outweighed their actual popularity.  While lots of carded Manimal figures had sold for around $1,000 each in the mid 1990's: the same figures were sitting unsold at half that price at the turn of the century.  The collectors of the day found the figures too far removed from what Joe should have been.  And, as such, those collectors had no interest in them: even if they were the most famous unproduced item in the Joe line at the time.

At the time, I was a Star Brigade junkie.  I saw the first three figures in the stores and didn't buy them.  They held no appeal to me.  Finally, after a month or so, I broke down.  KB's online arm was participating in the ridiculous Star Wars clearance sales of that time.  They had Stormtroopers in stock and I ordered a ton of them.  The price was stupidly low.  So, seeing that they had the Manimals in stock, too, I added the three figures to my order.  If not for the cheap Star Wars figs, I'd probably have left the Manimals behind.

But, in relative terms, the second wave of Manimals probably contained the more interesting molds from the series.  In this case, we see the Vortex figure.  As a closed up design, Vortex isn't all that spectacular.  He looks like a bulky, armored knight.  If he didn't open up, the figure would look right at home among a number of mid 1990's toy lines.  The special part of the figure occurs when you open him up, though.  Inside, you find a a super creepy, 6 nippled, smiling alien who's pointing to the sky.  (Or, kind of flipping you off.  Not that there's a message in there.)

Like all the Manimals, Vortex is not great.  But, just for sheer weirdness, the character has some value.  He's just so out there.  It's doubtful that Vortex would be any more popular than the other 5 Manimals had all 6 been released at retail. But, the stupid little alien inside is something a little different and kind of makes me want this guy.

In actuality, the unproduced 2001 Manimals are probably rarer than the 1994 unproduced Manimals.  It's just that no one really cares about the repaints in relation to the originals.  This figure is weird and strange and completely not a G.I. Joe figure.  And, all that makes it better.  Manimals aren't for everyone.  But, things like this Vortex show why.  I'm torn as to whether I'd have bought the 2nd wave of Manimals in 2001 had they been released.  On some level, I think I would have since I was kind of a completist back then.  But, I was also on an extremely limited budget in 2001 and 2002 and it's very probable that $30 worth of Manimals would not have made the cut of items I purchased.

This Vortex, though, remains a reminder of what Joe could have been.  I think that if KB had, instead, offered a 6 figure set of unproduced 1995 Battle Corps Ranger figures, all six would have been made and they'd be among the most desired figures from the ARAHC era of the early 2000's.  Instead, we got 1/2 of the Manimal run since collector interest wasn't strong enough to justify a second wave. 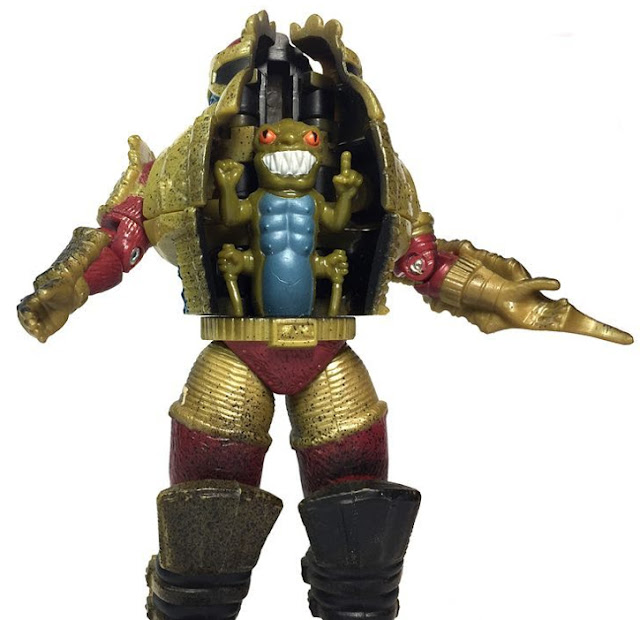 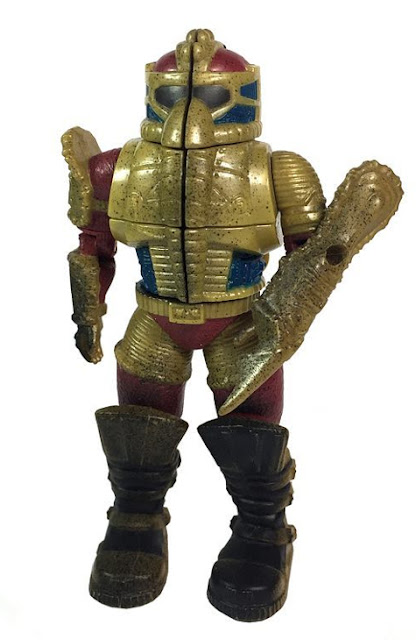 Posted by Robot_Sonic at 1:25 AM
Email ThisBlogThis!Share to TwitterShare to FacebookShare to Pinterest
Labels: 2001, Manimal, Rarities, Retailer Exclusive, Unproduced, Vortex