The 1997 Joe line was so full of promise.  While collectors were largely disappointed by the actual, final product that was released, the reality of new Joes at retail was an endless stream of what could be.  Sure, there were misfires like the Breaker and Rock and Roll figures.  But, many of the other figures were strong and hinted at the possibility that the long term prognosis for the line was a steady flow of classic molds with their original accessories done up in new and often solid color schemes.  While that, largely, didn't come to pass.  The early waves of re-released Joes did have some real winners.

This Torpedo was everything collectors ever wanted in a repainted Joe line: an iconic pre 1988 figure with his original accessories done up in a color scheme that was strong, but did not tread on the original nor get too environmentally specific.  Granted, the base black color bears resemblance to the 1983 figure, but the lack of grey really differentiates them and allows the different versions to co-exist.  (The 2001 Wetdown, was a different story, though.)  The red highlight treads on Cobra coloring.  But, as an accent, it does help to give this figure more depth than a completely black figure would.  It should have been a great figure.  And, until you hold it in your hand, it is.  But, the construction quality on the 1997 Joes was spotty and Torpedo is among the worst offenders.  He feels like any movement could break the figure apart.  It's a sad detriment on a repaint that should be held in higher regard.

Torpedo was sold on a blister card for $9.99 in 1997.  The 1997 series consisted of 3-figure blister carded sets or "Mission Series" where you got 1 figure and a small vehicle for the same price.  The Mission Series consisted of Duke and the Silver Mirage, Viper and Trouble Bubble and Torpedo with the Night Landing.  This time, though, the Cobra raft was rebranded to Joe.  In and of itself, that wasn't a terrible choice.  The raft is generic looking enough that it could easily be manufactured stock that was sold to many buyers.  Plus, it's not really an iconic vehicle (like the Rattler!) where it would be tough to see it in any color without Cobra sigils.  For $10, these sets were an OK deal.  They seem like a bargain now, especially since the figures included their full complement of accessories.  But, in 1997 and 1998, you could often get the original figures and the original vehicles for about the same price.  (Even less if you bought large collections.)  It wasn't uncommon for lots of 40 to 50 mint and complete 1982 - 1985 figures and vehicles to sell for an average of $1 per figure and a couple of bucks per vehicle, depending on which vehicles they were.  So, when you considered that, the sets were seen by many collectors of the time to be of less value for their collecting dollar than buying vintage pieces.

As such, the 1997 Joe line largely languished on the shelves.  While it did sell well enough to warrant a 1998 series, pretty much every 1997 pack and vehicle was available through the entirety of 1998 and even in 1999.  Slowly, the more popular figures started to disappear.  And, as the various production runs of '98 figures came and went, the '97's started to dwindle, too.  The slow burn left a lot of collectors somewhat jaded on the 1997 figures for a few years.  But, when the Joe world exploded in late 2000 and early 2001, the rush to complete these recent sets brought back a great deal of interest in them.

The construction quality of the 1997 figures left a lot to be desired.  And, Torpedo is one of the worst figures in the series.  The figure just feels weak and poorly built.  It may a function of the mold's long use in India by Funskool, or just a really horrible batch of plastic.  But, Torpedo figures feel cheap and like any pressure would break it apart.  As a toy, this is a severe detriment.  As a collectible, it's less an issue.  But, the overall soft plastic used for the hands does make it difficult to long term display the figure in any configuration where he's holding his gear.  That greatly diminishes the figure's value.  If you can't put him out on display, what can you do with him?

And, in the end, that is what makes this figure problematic.  You can argue that this is the best version of Torpedo in terms of coloring.  But, the original is still so strong that this version being superior to it is a marginal victory if one at all.  What you gain in color, you lose in construction.  So, in the end, it's a wash.  I first acquired this figure back in early 2001.  I've wanted to use him many times since then.  But, I find that it's the original Torpedo figure who gets the call for dioramas, photo shoots or general display purposes.

The Torpedo mold got a lot of use through the years, though in few color schemes.  After his American release, Torpedo was also produced by Hasbro for Japanese and European markets.  The mold was then given to Funskool.  Torpedo was among the first figures released by Funskool and saw production runs for many years and in many variants.  (The most famous being the yellow Torpedo figure.)  Funskool, though, also used the mold for parts on a variety of different figures including their infamous Super Hero figure as well as Snake Eyes.  Hasbro reacquired the mold for this release and then proceeded to produce a renamed figure in 2001.  Unfortunately, outside of the Funskool yellow version, most of the other Torpedo molds resemble the V1 American figure.  There is no Tiger Force, or swamp Torpedo that would have brought some diversity to the mold.

The 1997 figures have had an odd aftermarket life.  In 1997 and through the first part of 1998, they were all fairly common at retail.  It's likely that had they more shelf space at TRU, collectors would have considered them pegwarmers.  They sold, but not briskly and you could pretty much get any set you wanted at retail for at least a year.  When the 1998 Joes came out in December, though, that helped wipe away most of the unsold 1997 merchandise.  While you could find some of it into 1999, it was mostly gone.  (At least, the figure sets were.  The Stars and Stripes set lingered a little longer.)  Once they were gone from retail, though, collectors largely forgot about them...until 2001.  Then, as the Joe world exploded under the release of the full retail A Real American Hero collection as well as internet ascension kismet, the market for 1997 figures got rather heated.  By the end of 2001 and through 2003, most of the 1997 Joes were $15 - $20 acquisitions with the army building Vipers and Alley Vipers hitting nearly $30 with regularity.  The 1997 Joe collectors had bought the new figures for their collections, but few bought extras for future trading.  So, as the Joe world got larger and larger, there was simply no supply of 1997 figures available and pricing reflected that.  Slowly, though, a combination of a shrinking collector base and release of other, better versions of many of the 1997 molds brought substantially lower pricing.  Today, the 1997's tend to be pretty cheap.  The poor construction and materials combined with the wealth of other figure options has left them largely by the collecting wayside.

And, that is the fate of Torpedo in my collection.  The vintage figure is much better both in terms of coloring and construction quality.  As such, he is much more useful.  As an alternate, this Torpedo is decent.  But, the overall dark color base makes him difficult to photograph in many vehicles where he would best fit.So, when I'm looking for a Torpedo to man the WHALE or Shark 9000, it is the vintage version who gets the call.  This 1997 figure mostly sits in his drawer and gets pulled out when I have things like a profile of an obscure figure version to write.  It's not a terrible fate and this is a figure who is superior to many of his contemporaries.  I just don't find myself taking advantage of the figure's quality. 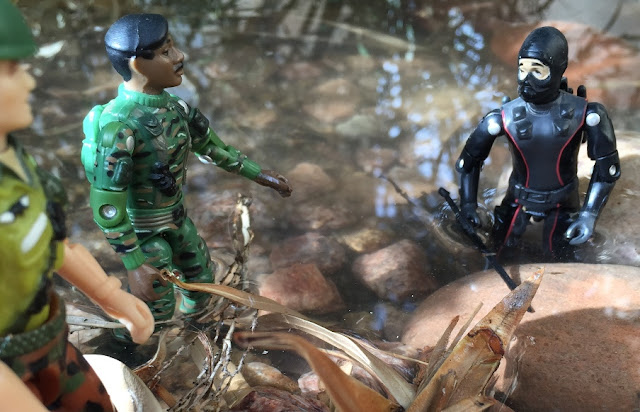 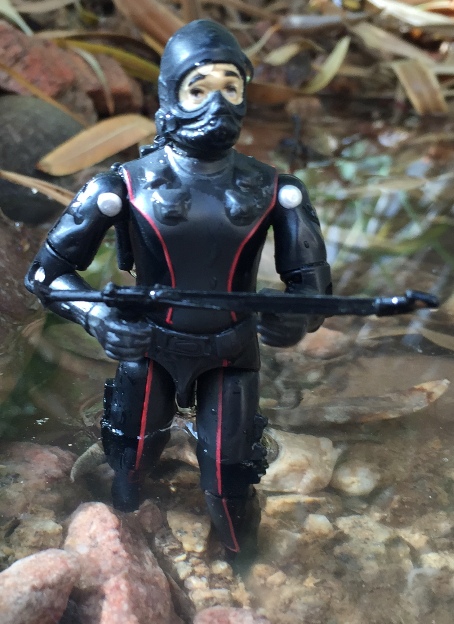 Posted by Robot_Sonic at 5:30 AM
Email ThisBlogThis!Share to TwitterShare to FacebookShare to Pinterest
Labels: 1997, Retailer Exclusive, Torpedo