The summer of 2004 began a weird time in Joe history.  As 2003 wound down, a large volume of figures in unproduced color schemes began to appear from Asia.  The first were items like the cancelled Wal Mart exclusives and a few alternate color schemes for convention figures.  As 2004 passed by, hundreds of these alternate figures began to appear.  Almost every Toys R Us exclusive set released in 2004 also had an unreleased counterpart in an alternate color scheme.  Some were drastic.  Others were minor.  But, collectors had a steady stream of unproduced figures available to them.  The prices would fluctuate wildly.  Some figures would sell for $100 one week and $15 the next.  Some figures disappeared after only a few appearances while others seemed to have a never ending supply.  As a collector who likes oddball items, a few of these alternate figures caught my eye.  The one that really got me going on the unproduced bandwagon, though, was an alternate set of the 2004 Comic Pack #3 figures.

Comic Pack #3 included Clutch, Hawk and Stalker.  Originally planned to be part of the first case of comic packs, it was initially pulled from the first case assortments and didn't appear at retail until a few weeks later.  Frankly, of the first three comic packs, this was the one collectors were least excited about.  So, the fact that it was delayed helped to foster some interest.  Asian sellers, though, had a different version of the 3 pack.  It included the same three figures with three major differences:

1.  Clutch's head was different.  The alternate version was smaller than the production figures.
2.  Stalker's face had Caucasian skin.
3.  Hawk had an African-American skin tone.

It was the Hawk figure that made the pack a must buy for me.  Here was the chiseled Hawk from the comic, with his blazing blonde hair, but set in a completely different racial release.  As soon as I saw the figure, I knew that I had found the perfect head for a new Cobra.  I spent the ~$30 to get the figures from Asia and added this alternate Hawk to my collection.

I didn't, though, know what to do with him.  Switching the Caucasian Stalker head onto the Caucasian Hawk body was a decent match.  For a while, I saw that creation as Manleh.  But, in time, the bright green didn't feel right for the character and that figure faded away.  The African American Hawk head on the African American Stalker body was OK.  But, the small head didn't look right on the body.  And, Stalker's color scheme was pretty weak.  So, I took the head off and left it sitting in a box.  In the first week of 2005, though, my local Wal Mart clearanced all their #4 and #5 Comic Pack sets for half price.  Through this, I was able to acquire a large number of Comic Pack Cobra Officers from the #5 pack.  For some reason, I liked this version of the figure.  It was then that I realized the variant Hawk head would be a perfect fit on one of these Officer bodies.  I made the switch and Skeres was born.

Anthony Burgess (Of A Clockwork Orange fame) wrote a novel titled Dead Man in Deptford.  In the book, there is a character named Skeres who is introduced as a filthy man with no taste for hygiene.  His profession is described as "cutter".  As in, good with a knife and will cut you, cutter.  I thought the name was perfect and the specialty was a natural fit for the background of a new villain to add to my collection.  For years, I had this character in the background, but could never find a figure that fit him.  Enter this Hawk head.  When placed on the Officer body, I had something so visually distinctive, but at the same time grounded in Cobra lore, that I needed a character for the creation.  The marriage of Skeres and this custom was a perfect bit of kismet.

From the get go, this figure has featured prominently in my photos, dioramas and profiles.  He is a mesh of classic pre 1985 Cobra that will mingle with those figures while also being "modern" and fitting with figures from post 1984 release years.  So, I've long used him whenever my Cobra hierarchy meets.  He's such a different animal than you usually see with Joe figures that he always stirs conversation.  Plus, his visible face is part of my new Cobra mentality where the new, younger, dynamic leaders don't hide behind masks or helmets as they do not fear the repercussions of their actions.  They are so confident in their abilities that they don't retain a secret identity that allows them to hide in defeat.  It sends a clear message to the new Cobra troops and has helped turn Cobra into a more dynamic enemy since they are no longer content to slink away for another day.

I have an entire backstory for Skeres that I wrote up nearly a decade ago when I first posted the figure:

A native Algerian, Skeres was orphaned at a young age and left to fend for himself on the streets of Barcelona. He quickly learned the value of being good with a blade and earned a reputation among the homeless squatters of that city as a dangerous man to cross. This reputation brought him to the attention of the Basque separatists who recruited him for terrorist activities in the city. Skeres was taught demolitions and explosives and was turned loose on the unsuspecting city. He destroyed several vacant buildings that had become homes to the street urchins he had recently considered peers. However, Skeres grew disillusioned with the Basque's motives and sneaked out of Spain having pocketed a substantial sum of the Basque's money.

Over the next several years, Skeres roamed the world's hot spots in Africa and Eastern Europe. Here, he honed his skills as a mercenary and soldier. As Cobra looked to move their operations into Africa, Skeres name appeared again and again as a possible recruit to lead operations in the area.

Skeres was approached by Cobra operatives several times about joining them. However, he was never fully convinced they had a viable plan. Finally, though, the leader of Cobra's South American Operation (Ramen) was able to bring Skeres aboard. He was quickly dispatched to South America where he distinguished himself as a field commander. Those who served under Skeres would follow him to their deaths without hesitation. He is a rare commander who earns the respect of his troops through skill, loyalty and sheer ability.

When Cobra was finally ready to move into Africa, Skeres was the first choice to lead the 1st Afrikaaner Division. This unit is comprised of many of Cobra's most battle hardened troops. In the division, there are no ranks. An officer may report to a sergeant depending upon the situation. It is a unique arrangement and one that has drawn great ire from the more established Cobra regimens. (Most notably, the Crimson Guard.) The men who comprise the Afrikaaner Division, though, look to Skeres and his dealings with the Cobra aristocracy. Skeres is the buffer between the bureaucracy and the field troops. His men know he will not betray them or lead them astray. The reward him in turn with fierce loyalty and ruthless drive to complete their goals.

As Cobra expands their operations, Skeres looks to become a prime player inside of Cobra. His affiliation with Ramen is troublesome to the Commander, but no one on Cobra Island can argue with the results that either of them have achieved.

Skeres remains one of the most dangerous knife fighters in the world. While his recent laurels have been earned as a field commander, he is known to still effectively practice the skill that first earned him his name.


The reality is that this figure is very difficult to find.  While there were a good number of these sets available in 2004, the variant comic pack dried up fairly quickly.  In the ensuing decade, all of the unproduced figures have become scarce.  But, with the scarcity has also come obscurity.  While all of these figures are rare, only the most desirable variants (Tiger Force Steel Brigade, Night Force Tracker, Dark Blue Anti-Venom figures) have retained extremely high prices.  Many of the others can be had for more reasonable prices...though they may still run anywhere from $40 to $80 depending on the character and who's in the market.  The problem is that you may wait for years before you see a specific figure.  You might be the only person who's interested when you do find it.  But, you have to be in the game for the long haul to track down all of these figures now.

I was fortunate to be collecting when these figures were available from the source.  It allowed me to add them to my collection with cheap ease.  As those days are gone, it's unlikely that figures like this variant Hawk would be part of my collection were I new to the collecting world.  But, I'm grateful for figures like this.  So much of the ARAH style figures that were released in the 2000's was bad and bland that items like this that were completely different and a little hard to find were fun.  The speculation that the figures were "illegal" or "stolen" only added to the mystique.  This Skeres is a figure that has simply become part of my collection.  He is no longer an oddity or a rarity.  He just "is".  I like that.  It gives me a fun character that's different. 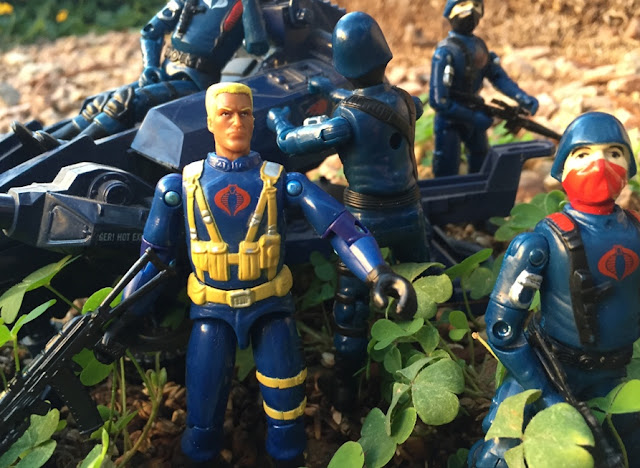 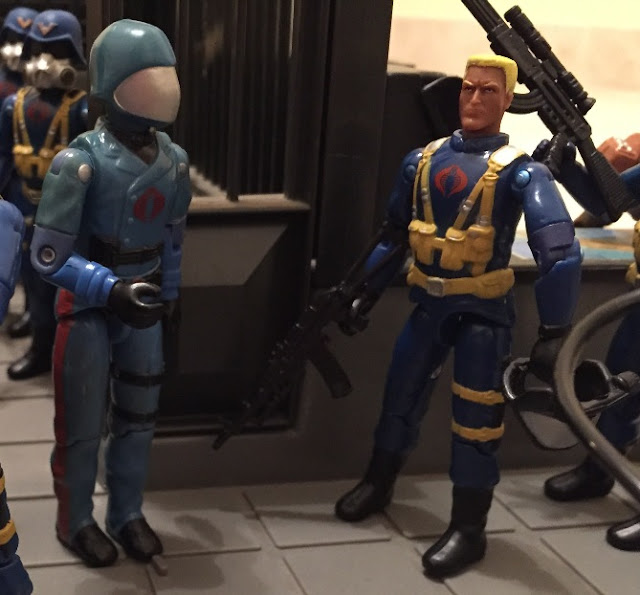 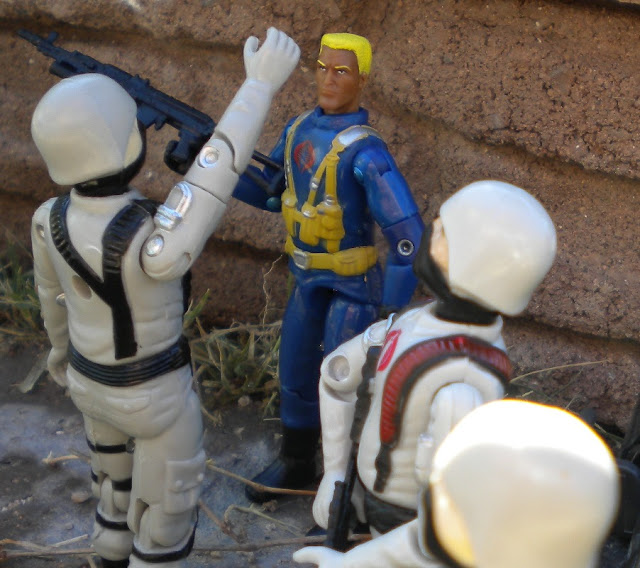