In 2019, Hasbro shocked the Star Wars community with the announcement of 6 Kenner styled figure releases.  These figures looked like the vintage Kenner designs and had matching cardbacks.  They were a Target exclusive for retail sales that were marketed around Father's Day.  But, were also available to online dealers later in the year.  Initially, collectors were skeptical about them.  All of the tired arguments about having them "devaluing" vintage figures were thrown around.  But, when they were actually released, the retail stores sold out of them quickly and collectors generally loved them.  (Sure, there were gripes about the Retro sticker and the "weathering" of the cardbacks.)  Hasbro decided to follow up that success with 6 additional "Empire Strikes Back" themed figures for 2020.  This time, they are a Wal Mart exclusive.  With a bit of luck, I found the end cap containing the figures.  And, for the first time in 40 years, I acquired a Bespin Luke Skywalker figure.

I've told stories of my grandparents and their spoiling me before.  Of course, my memories of this figure also begin with them in the summer of 1980.  I spent a week or two at their home that year.  And, like always, my grandmother spoiled me rotten with daily trips to the various retail stores in Dayton, Ohio.  During these trips, I found many figures.  Lando stands out to me as I remember opening him beside the bed in my grandparent's room.  I found the Snow Trooper at a Best Store, too.  I'm not sure, though, when I found the Bespin Luke Skywalker.  It may have been with my grandparents.  Or, it may not have been.  My first remaining memory of the figure, though, pertains to another piece of my youth, the next door neighbors who lived by us at the time.

Growing up, our next door neighbors and my family were close.  They had two girls who were both older than I was.  One was three or four years my senior while the other was about 18 months older.  Growing up, we were inseparable.  Each morning, we'd meet up outside and play in one of our yards.  By the time G.I. Joe came out, though, the age difference was starting to show and I have no association of Joe to them other than the day they were playing their new "Purple Rain" album in the front yard when I was stuck inside, sick, with my new Zartan figure.  But, I have two, specific, memories of them with Star Wars figures, and the Luke Bespin figure is involved in both.

The first was in the summer of 1980, when I first owned this figure.  As he was my favorite, I tended to take him everywhere.  I was playing outside with him when the girls came out to ride bikes.  I decided to ride one of their bikes down the sidewalk.  The bike had a basket on the front.  So, I put my complete Luke into it, thinking it safe while I rode.  But, somehow, Luke's saber managed to slide under one of the weaves in the basket.  When I stopped riding, it was gone!  We all walked up and down the sidewalk until we found it.  Relieved that it was once again in my possession, I checked the basket to see how it managed to fit under one of the tight weaves.  There were just a few places where it did.  So, it was an incredible stroke of bad luck for the saber to fall out.  Fortunately, being rather young, I was only allowed to ride my bike a short distance.  So, there wasn't too much sidewalk to search to find the missing weapon.

The second memory occurred at least one year later.  By then, my Luke's lightsaber was long lost.  But, one afternoon, the girls came back from an outing with their parents.  They had each purchased one new Star Wars figure.  This was odd as they had never bought a figure before.  But, they had each chosen one for a present.  One of the figures was the Luke Bespin.  We went out to the sandbox in their backyard and built a huge tunnel system to use with the figures.  I was insanely jealous of their lightsaber as it was my most wanted accessory.  Within a couple of days, though, their interest in the figures faded away.  I asked if I could have their lightsaber.  But, they had lost theirs, too.  They said it might be in the sandbox.  I went out and dug through it a bit, but with no luck.  Over the next few days, I'd hop our back fence and sneak into their yard to dig in the sandbox a bit more.  I never found the saber and the yellow weapon with this 2020 figure is the first lightsaber of that color I've owned in almost 40 years.

I skipped over the first wave of Retro figures.  I thought they were neat.  But, none of the original figures really sparked that nostalgic flow.  While I had all of them growing up, I didn't feel the need to track the figures down.  I figured I might buy them if I saw them.  But, I never saw them.  With this second wave, though, more nostalgia did hit.  Originally, I wanted Boba Fett because...well...Boba Fett and Lando as I associated him with my grandmother.  Seeing this Bespin Luke, though, brought back the memories of my old neighbors.  We were inseparable for years.  But, as we got older, the age difference began to drift us apart.  Before that really asserted itself, though, they moved away in the summer of 1985.  Their parents would show up at our house from time to time when they were in town on business.  But, I only saw my friends once more in the summer of 1989.  There's a picture of that meeting somewhere in my mother's house.  The story doesn't have a happy ending as both girls ultimately found drugs, poverty, homelessness and even prison.  But, the memories of playing as kids is something I haven't often revisited.  This figure has brought back a rush of childhood events that I hadn't had occasion to remember in quite a while.

One of the reasons I wanted to talk about these Star Wars Retro Collection figures was because we've all seen the Wal Mart listings for a "Retro" series of G.I. Joe figures coming later this year.  We don't know if they will be full on reproductions of vintage Joes.  Or, if they'll be anniversary style figures in retro like packaging.  Either way, a large segment of the Joe world will be disappointed.  We know the price point on those is $13...which is more in line with a more modern figure style in vintage packaging like the Star Wars Vintage Collection.  However, vintage Joes would require 18 individual pieces as well as metal rivets and an o-ring to produce a figure.  The labor to construct it would be higher than a 5 points of articulation vintage Star Wars figure.  So, the price point really doesn't give us any clues.  At some level, I'm hopeful for vintage Joes.  But, Hasbro slammed the door shut pretty hard on classic Joe figures in the early 2010's.  Sure, things change.  But, I'd also like the figures to be anniversary style so I don't have to bother with them.  Regardless of which figure style they are, though, I hope that things like the Retro sticker and faux shelf wear are avoided since they are detrimental to the overall visual experience of the product.

As a kid, vintage Star Wars figures were amazing.  Kenner improved their sculpting as the years went on.  And, at the time of his release, this Luke Bespin was about the most amazing action figure you could get.  Gone were the crappy telescoping lightsabers.  This Luke had a saber that could be shared with others and it did not render his right hand unable to hold a blaster.  But, looking back at this figure now, it's a pretty sorry toy.  Star Wars figures were fun because we had nothing better.  G.I. Joe came along and it was better.  In 1983, it was a LOT better.  And, with the advent of Joe, I had no need for Star Wars toys.  One of the great legacies of the Joe line is the trove of knockoffs it inspired.  But, the overall quality of the G.I. Joe line in terms of construction, posability, accessories and vehicles simply overwhelmed all comers...Star Wars included.  One of the reasons that I've never really gone back to the vintage Star Wars line is because they were rendered obsolete by G.I. Joe.  What nostalgia I had for them was appeased in the 1995 and later Star Wars line that offered far better sculpting and, ultimately, super articulation.  This Bespin Luke is antiquated at best.  Seeing him now, I associate this figure with the crappy toys from the 1950's that my Dad would show me from time to time.  I couldn't understand how kids found those appealing.  Action figures have moved so far ahead of original figures that they are now that dated.  I guess that's good.  But, it was a stark revelation to me when I brought this guy home.

These Retro figures will be an interesting collectible as time goes on.  If Hasbro were to continue releasing 6 figures per year, they could milk a decade and a half just remaking the classic Kenner line.  But, I doubt that will happen.  At some point, the line will suffer from a lack of major characters and the vintage nostalgia train will run out.  We don't really know how many of these were made.  Wal Mart's initial stocking was a pre-packaged end cap with 4 to 6 sets of figures included.  There are over 5,000 Wal Mart stores in the US.  So, that's 20,000 - 30,000 of each figure just assuming every Wal Mart gets one end cap.  (They won't, though.)  Target never restocked their 2019 offerings after Father's Day of that year.  But, online vendors did get stock and additional figures showed up in Europe in 2020.  Wal Mart's online orders haven't shipped yet, either.  So, it's likely we'll see these again in some form...whether additional Wal Mart stockings on standard retail shelves, online or as part of some other release in the future.

In the pandemic where few people are shopping, my local Wal Mart sold out of these in less than 2 days.  (And, it's a Wal Mart where collectibles often hang around for a while.)  So, there's huge demand for these figures. For me, key releases will be must buys...provided I don't have to jump through hoops to get them.  I'd love a Luke Jedi or even an Amanaman.  But, I'm past my days of having great in interest in vintage Star Wars figures.  Figures like this Luke Bespin that have associated memories are great.  (I'd probably have tracked down an Obi Wan Kenobi had it been part of Wave 1 for this reason.)  But, vintage Star Wars figures are still easy to find.  Even carded figures collect dust at every collectible shop in town.  But, few mint and complete figures can be had with a cardback for $10.  So, the Retro figures maintain that appeal.  For me, this is a fun product that hearkens back to childhood and the time of the original releases.  So, it's worth it.  Within a few weeks, we'll know more about the retro G.I. Joes and will see if they spark the fire. 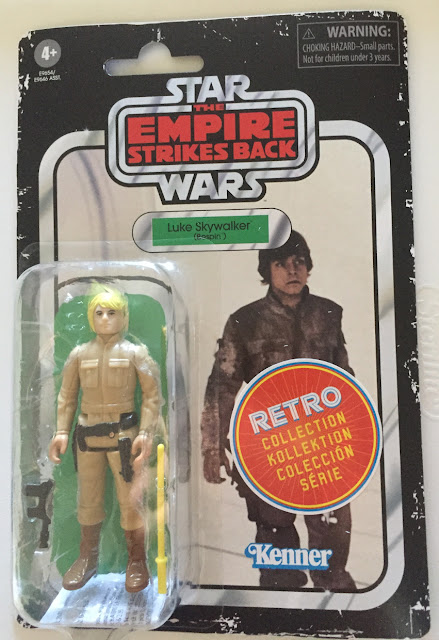 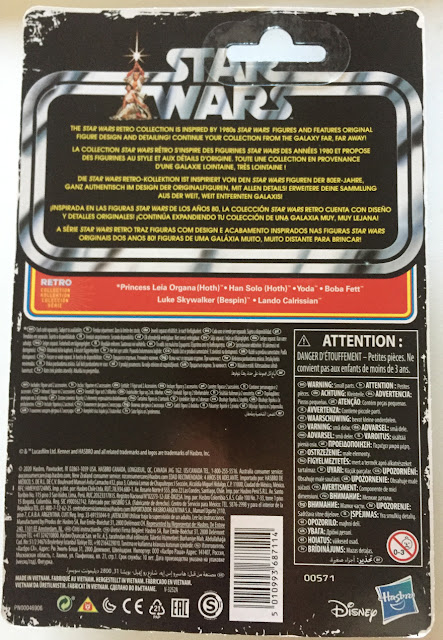