When I started collecting G.I. Joe figure in the late 1990's, collectors generally stopped all conversations about figures with the 1987 series.  Most people were trying to complete an '82 through '87 collection and then moving on.  They had no interest in anything released after that year.  Some of the savvier collectors found gems in 1988 and 1989, though.  Hit and Run, the Night Viper and Shockwave were deemed acceptable to pre-'88 collectors.  Another figure who fit that profile of "later" run designs was the 1988 Stormshadow.  While collectors vastly preferred the 1984 version, they did accept that this new update was a solid rendition of Stormshadow.  And, his affiliation change reflected what was going on in the comics at the time.  Hasbro found that this mold was useful in other ways, too.  Like the 1984 figure, the 1988 Stormshadow mold was exported and saw release in Brazil and in India: where Funskool made their own version of the classic updated Stormshadow figure.

At it's core, the Funskool Stormshadow isn't that different from the American version.  (And, the Brazilian version is pretty much in line with both of the others, too.)  From a distance, they are the same.  Up close, you can see the slight color variants.  And, Funskool's sloppier and heavier paint makes for a more distinctive visage on the figure's face.  But, really, there's no reason to have a Funskool Stormshadow if you have the American figure.  They are, practically, the same.  In the days of $4 Funskool figures, the Indian version was useful due to it being so cheap and always being complete.  But, as that price disparity has dissipated, the need for the Funskool release is diminished to just something for bored collectors to find.

While I was mostly out of Joe collecting in 1988, my younger brothers still picked up figures from time to time.  Among them was the 1988 Stormshadow.  So, while the figure wasn't part of my childhood collection, I was familiar with him.  (At some point in late 1988, I spent a boring weekend at my aunt and uncle's in a small town in Ohio.  My brother had a the 1988 Stormshadow and a custom figure that used mostly parts from the 1985 Snake Eyes.  I found them in the basement of their home and had a little adventure to just pass the time away.)  I thought the figure was amazing, though.  The claw was a weapon I'd have loved to have had in my childhood collection.  It was a new weapon that was worthy of Stormshadow.  The sculpted ropes on Stormshadow's chest were a fun little detail that hinted at this figure being more useful than the rest of his gear indicated.

The overall sculpt of the figure, is a great upgrade over the original Stormshadow.  This 1988 mold is larger, bulkier and better fits with the post 1984 figures.  Stormshadow's head is exceptionally well done.  The wrap around face mask and hood appear as two pieces and give the head great depth.  In some way, the figure's only flaw is the rolled up sleeves.  But, this was intentionally done so that Hasbro could drop the famous Arashikage tattoo on the figure's arm.  This was a great nod to the comics and something that, in 1988, was an amazing cross over.  The tattoo reappears on the Funskool figure.  Though, there are tattoo variants and even figures missing them.  The rest of the body is pretty basic.  But, that works.  For a ninja, less is more.

The 1988 Stormshadow's gear is excellently sculpted and designed.  And, the Funskool figure includes versions of the classic accessories.  Sadly, though, the issues that plague the American weapons was also carried over.  While Stormshadow includes an excellent claw and bow that are done in black, he also includes a backpack and sword that are red.  Red.  While they aren't as aesthetically terrible as they sound, these colors were an odd choice.  And, having it replicated around the world has left collectors without a better colored alternative.  For me, the claw is the high point of the figure and remains the piece of gear that I most associate with the mold.  The bow is excellently done and provided the main source of custom Zartan weapons during the first decade of online Joe collecting.

Hasbro was careful about the figures they exported.  Through the years, they kept tight control over how certain molds could be used.  Characters like Wild Bill could be released in bright orange because Hasbro didn't really care about maintaining a classic look for the figure.  But, figures like this Stormshadow saw little to no variation in their international releases because Hasbro wanted the character and this design to remain consistent across all variations of the G.I. Joe brand.  Many of the now desirable early Funskool color variants that were replaced by re-decos of figures that more closely mirrored the American release were changed due to Hasbro's preferences for some characters to not stray from their iconic looks in comics, cartoons and other advertising that was reused around the world.

The Joe collecting world seems to have forgotten that from 2001 through 2005, Funskool G.I. Joe figures were available from any toy seller who had an American Express card.  Pretty much every collector who was interested had access to Indian wholesalers who would sell you cases of figures for around $1.00 per figure.  (Funskool shipped figures in solid character cases of either 22 figures or 24 figures.)  Savvier dealers could get them for less.  And, the massive profits off of Funskool sales propped up many dealers through Hasbro's turmoil as they cancelled items like the Cobra Island Infiltrate set or simply didn't have stock to ship to smaller dealers as with the 2003 "army building" wave of figures.  Figures like Stormshadow, though, were extremely popular and sold with great frequency.  The reason why figures like Stormshadow remain cheap today while oddities like Grunt are extremely hard to find is because so many collectors bought them at the time and dealers imported larger quantities of Stormshadows, Night Vipers and Flint than they did the brightly colored oddballs like Skydiver.

The 1988 Stormshadow mold had the three vintage uses.  All of them, the U.S., Brazilian and Funskool produced figures have the same colors and the same gear.  Funskool produced this Stormshadow until 2003, when Hasbro recalled his mold.  Hasbro then started using it for JvC era repaints.  The first appeared in 2004 when a green and brown Stormshadow was released in the Ninja Strike set.  This figure tends to be of poor quality.  But, the colors are somewhat unique to the mold.  I don't really see this figure as Stormshadow.  But, the color palette has some merit.  Hasbro used the mold again in 2005.  This time, though, it was released as a Red Ninja in a comic pack alongside Snake Eyes and...Stormshadow.  With no camo pattern, this plainer, red release does kind of work as an army builder.  The wave of releases with this pack saw heavy clearance around the country, so many collectors were able to army build a few of them.  After that, the mold died.  There are Funskool variants of the figure that are all white.  And, a repaint like that could have been a cool homage to the original Stormshadow figure and given collectors a more useful repaint than the oddball green 2004 figure.

1988 Stormshadow figures were just starting to get expensive when the mass imports of Funskool G.I. Joe figures began.  The widespread availability of a figure that was nearly identical to the American figure for $4 destroyed the collector demand for the 1988 figure for many years.  As the Funskool figures dried up, though, 1988 Stormshadow prices started to rise.  In turn, the Funskool figures rose a bit, too.  But, not really like you would have expected.  While American Stormshadows will run $25 or more, carded Funskool figures can still be acquired for around $15.  As Funskool figures, in general, have gotten stupidly expensive in recent years, this is a good deal.  But, with what's going on in the world right now, luxuries like action figures are likely to be greatly affected.  But, $15 is pretty cheap for a classic mold in near vintage colors.  So, this Stormshadow remains one of the better Funskool buys you can make these days. 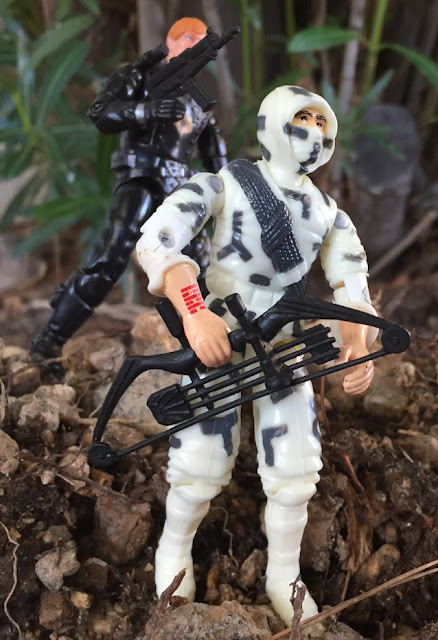 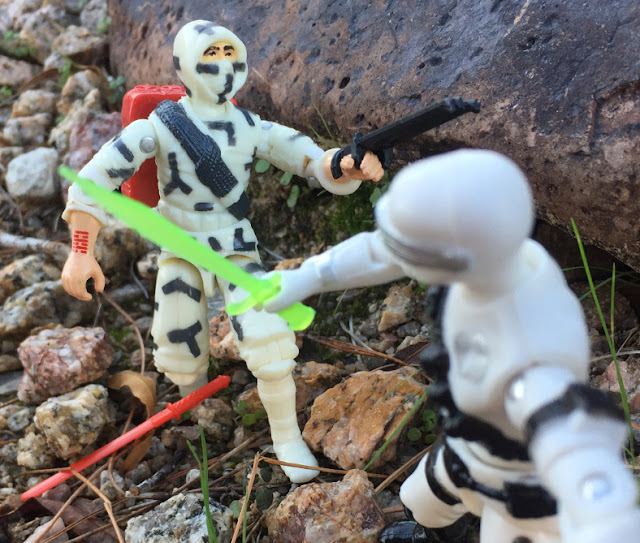 Posted by Robot_Sonic at 1:24 AM
Email ThisBlogThis!Share to TwitterShare to FacebookShare to Pinterest
Labels: 1988, Foreign Figures, Funskool, Stormshadow