2005 Cobra Imperial Guard - By Past Nastification

Return of the Jedi gave us our first really good look at The Emperor (I’m talking about the time before the prequels).  Sure, he was cool.  But cooler still were his helmeted and cloaked personal bodyguards.  The Emperor’s Royal Guard were badass yet stoic*.

Someone at Hasbro saw value in the concept and imported it to GI Joe.

The Imperial Guard is a far better concept than it is a figure.

The figure, in ARAH format, is made up of a Range-Viper head/waist/legs, and the chest/back/arms of Cobra Commander V3 (Battle Armor version).  Dropping CC’s personal bodyguards in a recolored bastardized version of his own armor is somehow fitting, but the Range-Viper head is far too iconic to work as anything but a Range-Viper.  A Cobra Officer head, with a retooled neck, might have been a more interesting choice.

As far as accessories, Hasbro disappoints.  Each Imperial Guards got a flag.  Yes, a flag.  Because you can use a flag to defend your leader from assassination attempts.  The flags feature nicely done flagpoles.  So there’s that.

Although it would have been overpriced, I’m sure the GI Joe Collectors’ Club might have been able to do something interesting with this concept.  Hasbro tried, but not enough.

*It’s important to point out the Royal Guard (or whatever the hell they were called) later shown defending Snoke in Star Wars The Last Jedi were horrible.  Disney tried to hybridize the Royal Guard with Power Rangers and Teenage Mutant Ninja Turtles, creating some truly rancid designs. 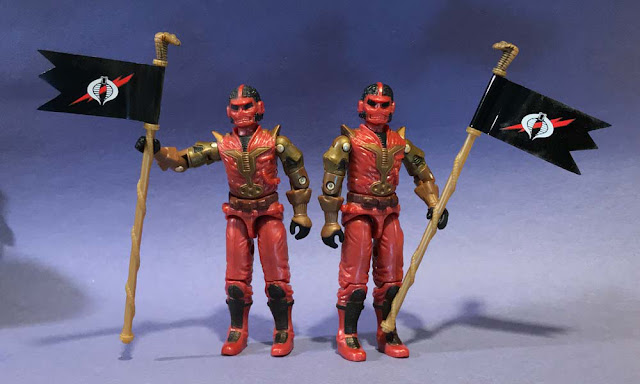 Posted by Robot_Sonic at 1:35 AM
Email ThisBlogThis!Share to TwitterShare to FacebookShare to Pinterest
Labels: 2005, Cobra Imperial Guard, Imperial Processional, Past Nastification, Retailer Exclusive