In 1995, the release of the new POTF II figures to retail re-ignited my passion for Star Wars.  As I was still in school, I didn't have a ton of money.  But, every now and then, I'd treat myself to a vintage Star Wars figure or two.  Among the first figs I bought in the summer of 1995 was an IG-88 figure.  While I hadn't really loved the figure as a kid, the character had grown on me over the years.  So, I wanted to acquire a loose version of him.  I found one (along with a vintage Boba Fett) at the Vintage Phoenix store in Bloomington, Indiana.  I dropped way more money than I should have to buy them both (Ebay wasn't a thing, yet.) and set them on my shelf where they would, eventually, be joined by other figures that made their way into my possession.
As Hasbro released more and more new figures in the POTF II line, it seemed just a matter of time until IG-88 joined them.  1996, though, proved to be a frustrating time to collect Star Wars.  The 1995 releases were sold out pretty much everywhere.  The later cases including Boba Fett, Lando and the Luke X-Wing Pilot had not really saturated the market.  The 1st few months of 1996 were a barren wasteland of empty pegs.  Then, suddenly, in the spring, new waves shipped to retail.  These would quickly sell out for a while.  But, slowly, pegwarmers began to appear.  By May, stores were packed to the gills with Luke Dagobah and Han Hoth figures.  They were the only two figures on the shelves.  And, there were TONS of them.  As more figures were announced, it started to seem as if they'd never get to retail.  But, as August turned to September, stores started ordering more figures and new wave after new wave started to appear.
In October of 1996, I went to the local Wal Mart in my college town to get the oil changed in my van before I drove to my cousin's wedding.  While waiting, I wandered over the toy aisle and was greeted by rows and rows of the newly released Shadows of the Empire 2 figure packs.  1/2 of which were the Boba Fett/IG-88 pack.  I quickly bought one, opened him in the van before I left and then kept him under the seat in the back of the van until I returned home on Sunday.  This new IG-88 seemed vastly superior to the vintage figure.  Though, in reality, they were very similar.  But, I was satisfied to have the character in an ugraded form.  A few years later, though, Hasbro released another updated IG-88.  This one was an upgrade.  Though, the figure still wasn't perfect.  In 2007, though, more than a decade since my original hunt for an IG-88, Hasbro released a "definitive" version of the character on a vintage styled cardback.  This new release was tall, lanky, well detailed and very much a figure that made the prior renditions of the character obsolete.
At long last, I had the definitive IG-88 I had always wanted.  And, I quickly kind of forgot about him.  In the next couple of years, I managed to find updated versions of all 6 bounty hunters: which was kind of a thing for me.  But, the figure faded into the background as I lost a bit of interest in all action figures in the early 2010's.  I put my Star Wars figures away when I moved in early 2013 and didn't pull them out again until my kids were finally old enough to start playing with them.  When I did this, though, I did put this IG-88 aside.  He was fragile, which worried me.  But, also, he was a figure I wanted to keep nice.  So, he joined the animated Boba Fett, Admiral Raddus, Indiana Jones, Kit Fisto and a few other select figures in a special case that the boys were supposed to play with.
Sadly, my copy of this version of IG-88 still got broken.  I found him hidden in a pile of figures in my office: right arm snapped off.  After a quick interrogation of the kids, the middle boy came clean that he had broken it one night.  It's somewhat funny, though.  Back in the 1980's, my brother broke the right arm of his IG-88 figure.  I used that one armed figure for years, though.  (Being a droid allowed this to happen.)  So, my now broken figure is a weird mnemonic device that recalls my childhood memories of IG-88.  And, frankly, I'm glad the figure got a bit of playtime before falling apart.
Like all Star Wars figures of his era, this IG-88 isn't worth much.  He was cheap and available at the time and hasn't really caught fire like many other figures that were released in lower numbers in subsequent years.  IG-11's appearance in the Mandalorian helped bring this model of droid to the forefront of the minds of a new generation of fans.  And, my boys got me an IG-11 shirt for Christmas.  So, the figure has value to me for that reason.  Plus, this IG-88 also shows what Hasbro can do.  My kids love the detail and articulation on the figure.  But, the figure isn't designed to withstand rough play.  The 5 POA figures hold up much better.  But, my kids are now of an age where they are asking for articulation.  There just isn't much at retail for them to acquire. 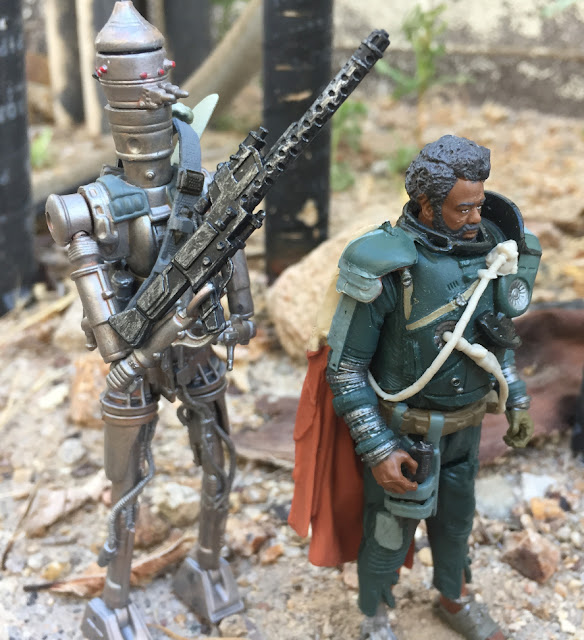 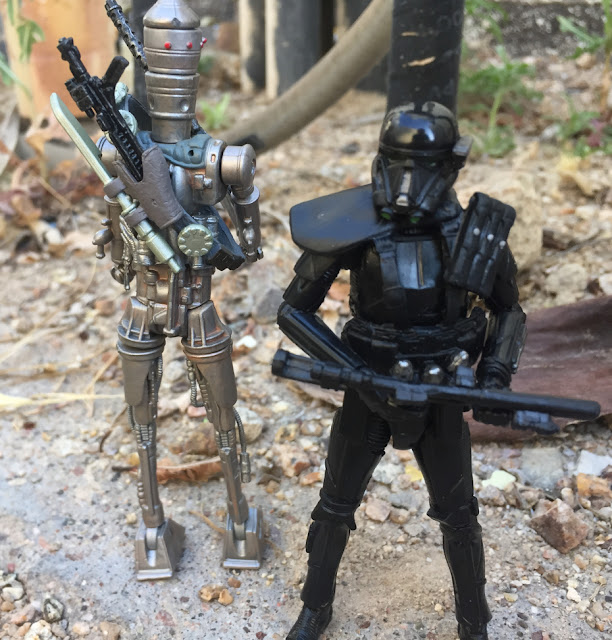 Posted by Robot_Sonic at 1:27 AM
Email ThisBlogThis!Share to TwitterShare to FacebookShare to Pinterest
Labels: 2007, IG-88, Star Wars