My first recollections of the Mission to Brazil set come from the fall of 1986.  The set showed up at my local Toys R Us store and was a mainstay of the Joe aisle for the rest of the year.  Eventually, the sets found their way to an endcap where they were stacked so high that they would fall of the shelves if you took down a box to look at it.  It was here that I held the box in my hand on each of our family's trips to Toys R Us.  I looked over the figures...unsure if I really wanted them.  The odd colors and familiar molds seemed a bit out of place in the Joe world of the time.  But, the more times I saw the set, the more I wanted it.  Despite, this, though, I never actually asked for the set.  But, my parents must have seen me staring at it, reviewing the contents and reading over the storyline.  Because, on Christmas morning in 1986, the Mission to Brazil set was under the tree.
1986 is an odd year.  Every year, at Christmastime, I got a flagship gift.  It had been the G.I. Joe HQ in 1983.  I got a Whale in 1984 and a Moray in 1985.  (I tried for the Flagg, but it was not to be.)  In 1986, though, I didn't get a large toy as a present.  In fact, I have no recollection of even asking for anything like the Terrordrome.  I had bought myself a Tomahawk in October of that year.  And, my youngest brother did get a Night Raven, too.  But, I have no memories of my large gift that year.  I do know that I got a new dirt bike around this time.  I paid for half of it, though, as a deal with my parents.  Maybe that was the gift.  But, it was out of character for me to have to pay for part of my own Christmas gifts.  Family photos offer no clues as we rarely took pictures on Christmas morning.  (A mistake I'm not repeating with my kids.)  So, I don't know why I didn't get a big toy for Christmas that year.  But, I did get the Mission to Brazil set.  (There was also a Dreadnok Ground Assault set.  Maybe that was my "big" gift.)  And, that ended up being a gift that helped define my Joe world until my final days of childhood.
By the end of 1986, my Joe world had turned into a complex, ever running story.  My adventures would stretch for weeks with character growth, death and defeat as central themes.  To prevent this from exhausting my supply of Joe characters, I had to come up with army building figures for the good guys.  This was where the Mission to Brazil set fit in perfectly.  The recolored Mainframe, Dialtone, Wet Suit and Leatherneck all became nameless specialty troopers who could die with impunity and not affect the main characters of my Joe story.  Each was integral to my story as the Joes could now withstand the might of Cobra, suffer casualties and not cost me one of my favorite figures or characters when one of them perished.  I have profiled all of the figures in the set (and, now, Claymore twice!) due to the importance this set played during my final year of childhood play.
But, the cornerstone of the playset, this Claymore figure, never got the chance to take a place of prominence in my collection.  I had some stories in mind for him as I stared at the mountains of sealed boxed at my local Toys R Us stores.  And, when I got the set, Claymore was really the highlight.  But, he simply didn't last.  His crotch snapped almost immediately.  And, the character of Claymore never got a chance to really join my collection.  Instead, he was an idea.  But, that idea never blossomed into anything more since the character didn't have a figure to play out his role.  So, Claymore remains one of those figures that got away.  He would have been great and probably a key player in my childhood collection.  But, the fragile figure prevented that.  And, by the time a nice Claymore came around, I had far too many new figures to really take time to explore the character that Claymore could have become.

Claymore's construction is problematic.  He features Footloose's head (that would also later appear on Rumbler), Flint's arms and waist, Dusty's legs and the Tele Viper chest.  On one level, seeing so many different figures used to create this amalgamation helps distinguish him from any of the originals.  But, the Tele Viper chest is both rather distinctive and oddly proportioned.  This gives Claymore an asymmetrical appearance.  But, the bigger issue is that the parts were not engineered to work together.  If you have ever looked for Claymore figures, you see a high number of them with broken crotches.  This is due to the fact that the Dusty legs are larger than the 1985 Flint's legs.  So, they are much more likely to break the crotch on the Flint waist than the legs originally designed with the waist piece.  By 1986, I didn't break figures.  But, I broke Claymore just trying to sit him into a vehicle.  And, I did it damn near the day I got him.  (The crotchless figure you see in the photos below is my actual childhood figure.  His joints and paint are almost pristine because I broke him so quickly.)  With that bit of bad luck, Claymore was relegated to second or third tier status among my Joes of the day.

Claymore's colors are interesting.  The bright yellow base can be troublesome for collectors.  On the 1993 Leatherneck, the color is ridiculed.  But, on Claymore, the 1986 release year makes the community more forgiving of the banana colored pants.  But, the figure is amazingly detailed and features intricate paint masks that place layers of brown, black, silver and green onto the various features of the figure's parts.  The brown and green are earthly and grounded.  This offsets the yellow and makes the figure appear less bright than he actually is.  I do feel that were Claymore a carded release, he would not be as well regarded.  Collectors are always more forgiving of harder to find figures.  But, Claymore is a nice match for the rest of the class of 1986 and looks right at home with them when on display.

Claymore's gear is not good.  He includes a green version of Footloose's helmet that is not painted.  It is often mistaken and you see many, many Claymore figures with an incorrect helmet.  (Sometimes, you can find a Footloose with a Claymore helmet, though.)  The helmet matches the green color of Claymore's vest.  So, it's a nice match.  Claymore also included an Uzi.  My version included a 1985 Snake Eyes Uzi.  It is indistinguishable from the original release of the weapon.  There are also reports of Claymore's that included the 1986 Uzi that was originally packed with the 1986 Low Light and would show up again with Law in 1987.  In the late 1990's, there were a great deal of sealed Mission to Brazil accessory sets that were available from various dealers.  These mostly included the 1986 Uzi. But, seeing as how these were sold 20 years ago and I'm the only one who remembers them, it's possible they are another false memory.  I have not seen a sealed set with the 1986 Uzi in a long time.  Every collector has their preference on weapon.  But, I feel Claymore looks out of place with the 1986 Uzi and that his filecard art shows the 1985 version, too.  As a kid, I needed Claymore to have a backpack.  The excellent 1986 Hawk backpack is a color match for Claymore's green helmet and body.  So, to this day, I consider this pack an essential part of any Claymore figure.

Claymore was released just this one time.  (There may be a European variant that does not have the cammo pattern on his pants.  But, I'm still not convinced these aren't production errors rather than variants.)  The character never returned in the vintage line and was even ignored in the repaint era.  He didn't appear until a convention set in the 2010's.  All of the figure's parts were eventually released in Brazil with their original molds with some then moving on to India.  In the early day's of online collecting, repainted Claymore's were a staple of customizers.  Some used parts from the 1985 figures.  But, Claymore's were easy enough to find that customizers would even repaint an extra that they might have lying around.  It's a shame that collectors didn't get to see Claymore return.  A repaint of this parts combo in different colors would have been nice.  But, a new take on the character would also have been welcomed in the 1990's.

There are very few rare G.I. Joe figures.  But, there are some that are rarer than others.  And, Claymore (along with his set mates) is probably the least produced 1986 figure release.  (AVAC would take the honor.  But, later mail aways increased his availability.)  And, while there are figures from the 1990's and 2000's that were produced in far fewer quantities than Claymore, his key release year raises his desirability far over those other figures.  So, you'll pay a substantial premium for the figure.  While Claymore was always expensive, he got a nice boost in the 2000's when he starred in a comic.  This appearance spiked the figure prices.  While they did subside when Joe hit pricing doldrums in the early 2010's, the price of Claymore's has since skyrocketed and he's one of the most expensive vintage, American figure releases.  A mint and complete version with the correct helmet will fetch $100 to $225 depending upon the filecard's inclusion or just general sentiment at the time.  The helmet is the key accessory, though.  And, you can get a nicely conditioned Claymore with no gear for around $70.  Since Footloose helmets are good enough and his uzi is easily findable, that may be the way to go.

Aside from rarity, though, I don't see a compelling reason to own the figure.  Claymore didn't appear in the vintage comic nor the cartoon.  If you didn't have the Mission to Brazil set, you would have no knowledge that this character even existed.  But, for many collectors, having a complete set from their childhood years, even if that includes figures they never owned as kids, is a priority collecting goal.  And, since Claymore is both prone to breakage as well as paint wear, you get premium prices for premium figures.  I own a nice one because I had a childhood connection to the figure.  But, even my Claymore broke quickly and he was never a vital part of my childhood adventures.  The four repainted figures from his set were far more key to me and they remain more relevant from a memory perspective. 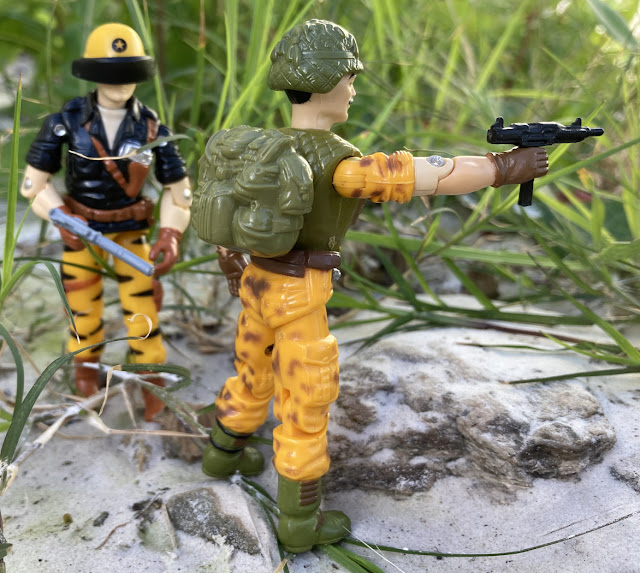 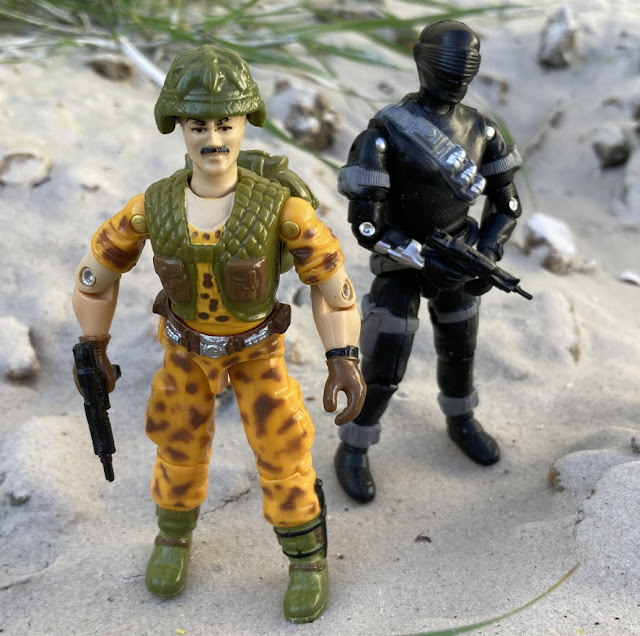 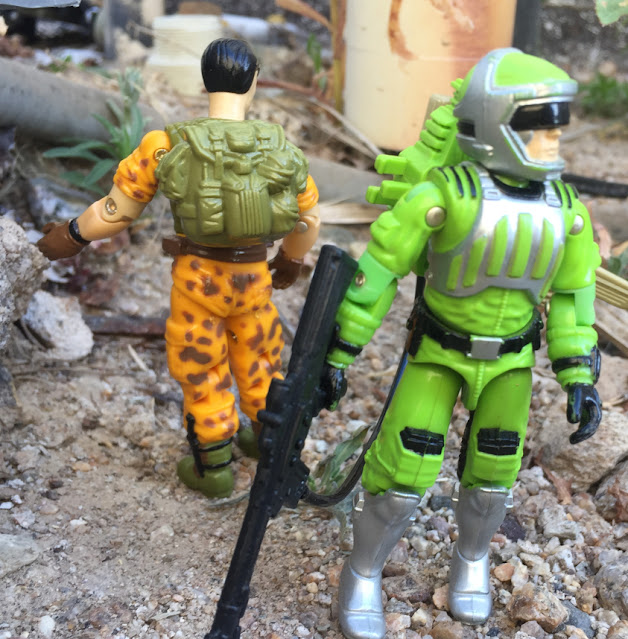 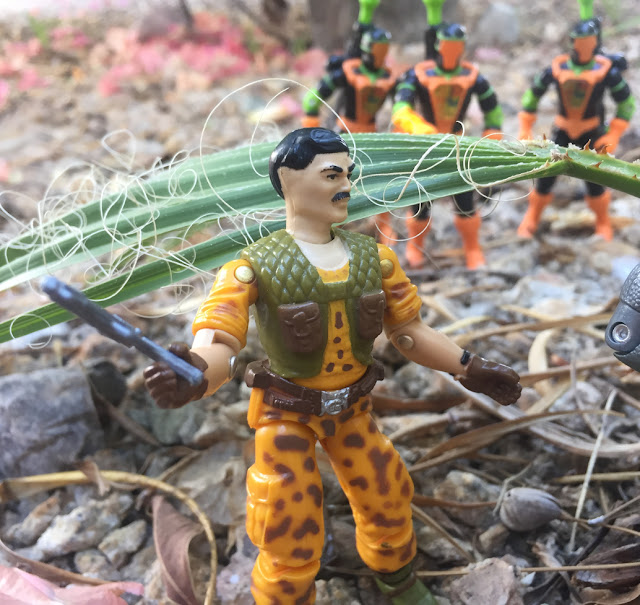 Posted by Robot_Sonic at 1:25 AM
Email ThisBlogThis!Share to TwitterShare to FacebookShare to Pinterest
Labels: 1986, Claymore, Mission to Brazil, Retailer Exclusive